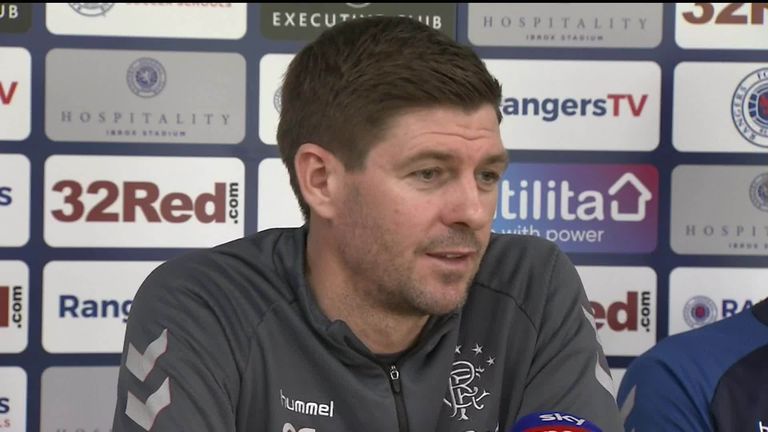 Steven Gerrard says that Celtic Park is not a lion's den ahead of Rangers' trip there on Sunday, live on Sky Sports Football

Rangers boss Steven Gerrard says that Celtic Park is no lion's den but if his players are not prepared for the Old Firm then "they are at the wrong club".

Neil Lennon's Celtic host their fierce Glasgow rivals Rangers live on Sky Sports Football on Sunday, looking to open up a 13-point gap at the top of the Scottish Premiership.

While Gerrard admitted that the Ibrox crowd was a "big help" for Rangers' 1-0 win over the champions when the sides last met, he claims that fans do not win football matches and that his players will be fully prepared for a hostile atmosphere.

"I've never seen fans win a football match, it will be loud but it won't be a lion's den," Gerrard said on Friday. "A lion's den is when four lions jump over a cage and you fear for your life.

"You have to thrive in this atmosphere. If any of my players don't fancy it they are at the wrong club.

"This time we won't have the power of Ibrox behind us which was a big help, but the players have to have that mentality to go and get the job done.

"If you go in with the wrong mentality you won't win these games. You have to take responsibility individually and collectively.

"We understand the gap in the league, for us, it is can we affect that? Celtic are clear favourites and this is probably our last opportunity to make it more interesting than it is at the moment."

Gerrard confirmed Gary McAllister will not be with the team at Celtic Park on Sunday. He wants his assistant manager to rest and recuperate after he was attacked last week.

"I took the decision out of Gary McAllister's hands, he won't be with us at the weekend," he said. "It is a shame but he has to focus on his recovery and we can't wait for him to return."

Gerrard also revealed that during his playing career with Liverpool he always favoured playing derbies against Manchester United and Everton away from home.

"It is a better feeling winning away," he added. "I thrived on the environment when everyone is against you."