Rangers fans gathered in their thousands outside Ibrox ahead of the 3-0 win over St Mirren; the club will regain the title for the first time in a decade if Celtic drop points against Dundee United on Sunday 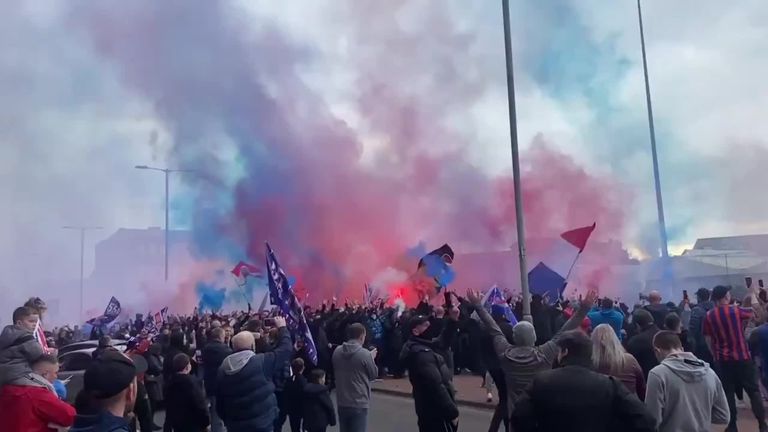 Thousands of Rangers fans broke lockdown to gather outside Ibrox ahead of Saturday's clash with St Mirren.

The Gers supporters turned up in their numbers to welcome the team ahead of the impending title party, setting off flares and engulfing the front of the stadium in blue smoke.

Rangers eased past St Mirren 3-0 and will now be confirmed as champions if Celtic drop points against Dundee United on Sunday, live on Sky Sports.

However, if Celtic beat Dundee United, the potential would remain for Rangers to seal the title in the Old Firm match on March 21 at Parkhead, in front of the Sky Sports cameras.

Chief Superintendent Mark Sutherland of Police Scotland said: "About 10am today a large number of supporters gathered outside Ibrox Stadium and a number of pyrotechnic devices were set off.

"I would remind supporters that in line with current Scottish Government coronavirus guidelines, all gatherings are currently prohibited and we would urge members of the public to comply with these restrictions.

"Our priority is public safety and an appropriate policing plan was in place and officers engaged with those present to explain and encourage compliance with restrictions."

A Scottish Government spokesperson said: "We are extremely disappointed supporters have gathered at Ibrox today.

"At this crucial stage of suppressing the virus, the actions of this minority of individuals jeopardises the safety of other supporters, the police on duty and the wider community.

"We will continue to engage with Police Scotland and the club."

The Blues Brothers Rangers and Linfield FC fan group posted videos of the gathering on Twitter.

A member of the group told the PA news agency: "It's scenes of joy. 10 years almost of pain and watching our rivals win the lot has been hard to take. It's scenes of relief to stop the 10 in a row.

"We'd expect celebrations to be bigger when Rangers officially do win the title whether that's tomorrow or two weeks' time against Celtic."

Rangers forward Alfredo Morelos has had the booking he received for diving against Livingston on Wednesday rescinded after a disciplinary hearing.

Morelos was booked after he went over in the penalty area under pressure from goalkeeper Max Stryjek - a decision that incensed manager Steven Gerrard, leading to him being sent off at half-time after being shown two yellow cards for his outburst towards referee John Beaton.

Morelos went on to score a late winner and he has now had an appeal against the decision upheld.