The SNP's James Dornan said he was "sick and tired of Rangers fans thinking they are above the law."; Rangers criticised a "small minority" of "so-called fans" over the violence which took place following the club's presentation of a 55th Scottish Premiership title

Strict liability for football clubs is "on the table" following the violence from some Rangers fans in Glasgow city centre, Scotland's Justice Secretary Humza Yousaf has said.

Mr Yousaf said parliament may have to take action if clubs are unwilling to deal with issues around fan behaviour, suggesting an independent regulator might be needed.

He added he recognised that Rangers had urged fans to follow coronavirus guidelines, though he said he wished the messaging would have been more "explicit".

The SNP's James Dornan raised an urgent question about the violence in the Scottish Parliament on Tuesday, saying he was "sick and tired of Rangers fans thinking they are above the law".

Mr Dornan said he had long campaigned for strict liability, where clubs are held responsible for the actions of their fans.

Mr Yousaf said: "I'm disappointed on many levels, with the selfishness of the Covid breaches, perhaps more so with the violence and vandalism we saw in George Square and with the anti-Catholic bigotry we saw on display."

He said Rangers were working closely with Police Scotland to identify those engaged in criminal activity.

On Monday, the club released a statement which said: "We worked closely with the authorities for two weeks before Saturday's match to ensure a consistency of message.

"Sadly, a small minority of people behaved inappropriately and in a manner not reflective of our support. Some of the scenes were unacceptable and have besmirched the good name of Rangers Football Club. These so-called "fans" should reflect upon the values and ethos of our club, and consider the damage this does to the reputation of the club.

"We will continue to engage with authorities as required." 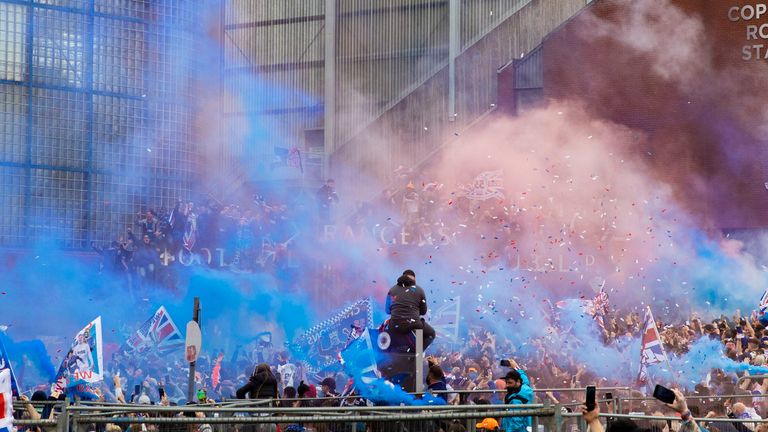 Asked about the anti-Catholic bigotry seen at the weekend, he added: "I woke up this morning to two rabid anti-Catholic messages which I have reported to the police.

"Now I'm neither a Catholic nor Irish, but that hatred was directed towards me, and I am intending to call it out.

"Certainly on this issue I suspect we will have support and collaboration."

Mr Yousaf said: "I think strict liability should be on the table.

"Other suggestions that I've heard should be on the table include potentially an independent regulator, as has been discussed for the English game."

Conservative MSP Liam Kerr said the scenes at the weekend were "disgraceful", adding: "Does the Cabinet Secretary agree with me that to avoid public confusion it is very important to ensure consistency by advising against all gatherings?"

Referring to last week's protest against immigration enforcement in Pollokshields, Mr Yousaf responded: "I have said, the First Minister has said, that if it wasn't for Covid regulations then we would have been on Kenmure Street.

"But we didn't go, because any gathering of any sort is not something we would encourage."

"Let's not think there is an absolute equivalence between what we saw at the weekend, those scenes of disorder, and what we saw in Pollokshields and some other gatherings over the weekend."

On Saturday, thousands of Rangers supporters defied Covid-19 warnings against large gatherings and massed in George Square to celebrate the club winning their first Scottish Premiership title since 2011.

The square was strewn with hundreds of broken bottles, plastic bags and spent flares after flag-draped fans had been seen attacking each other and launching bollards and other missiles at riot police.

Five officers were injured and 28 arrests were made - with the force saying more will follow.