Rangers take on Livingston after reaching the Europa League knockout stage; victory will move them seven points clear of Celtic; Giovanni van Bronckhorst has added Dave Vos to his coaching staff; watch Livingston vs Rangers on Sky Sports from 11am on Sunday; kick-off at noon

Giovanni van Bronckhorst wants to ensure his Rangers players remain hungry for success as he welcomes new assistant Dave Vos to the club.

The Dutchman, who was appointed as Steven Gerrard's successor last week, wants to build on his side's Europa League victory against Sparta Prague when they travel to Livingston on Sunday, live on Sky Sports.

A win would move the champions seven points clear of Celtic, who take on Aberdeen later in the day.

Connor Goldson was criticised for saying the squad had lost some of their hunger after defeat to Hibs in the semi-final of the League Cup last weekend.

But the passion was there in the 2-0 win over Sparta Prague as an Alfredo Morelos double secured Europa League football after Christmas.

Van Bronckhorst said: "My task is to keep this drive, hunger and passion in every game.

"The Prague game is gone and everything is focused on Livingston. We now have to show it again on Sunday as we look forward to the next match." 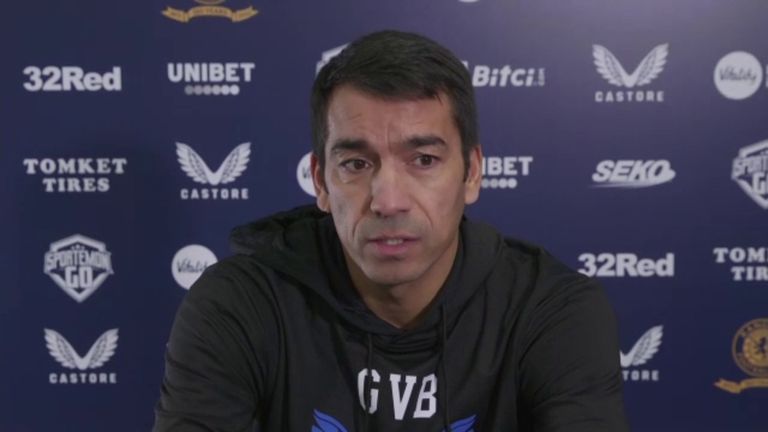 Giovanni van Bronckhorst says the 'talented' Dave Vos will help him develop the Rangers squad. The Ajax youth coach has been appointed as the club's new assistant manager.

Van Bronckhorst has now appointed Dave Vos as his assistant at Ibrox, with his countryman arriving from the renowned Ajax youth academy.

The manager added: "I spoke with him a couple of times this year. I have only heard good things about him and how he thinks about players.

"He is a very young coach and very talented. I saw him as a good assistant for me and I'm really happy with him joining the club.

"He will help with developing the squad and the players individually."

Van Bronckhorst has no fresh injuries for Sunday's game against Livingston. Both Leon Balogun and Kemar Roofe are still unavailable.