Lionel Messi saga and poor start to the season has forced Josep Bartomeu to quit Nou Camp role with bombshell announcement; Board of directors also resigns Josep Maria Bartomeu revealed Barcelona have accepted a proposal to join a future European Super League moments after announcing his resignation as the club's president.

Bartomeu has fallen on his sword as he quit, along with his board of directors, ahead of an expected vote of no confidence next month.

But he did not go quietly as during a press conference on Tuesday evening, Bartomeu said the Spanish giants intend to join a breakaway European league that Liverpool and Manchester United have been in discussions about.

"Today I can announce a piece of news that will extraordinarily change the club's revenue prospects for the coming years," he said in his parting address, reproduced on the club's official website.

"The board of directors yesterday approved the acceptance of the requirements to participate in a future European Super League of football clubs, a project promoted by the big clubs in Europe.

"The details of these requirements will be available to the next board of directors, and the decision on participation in this competition will have to be ratified by the next Assembly of Compromising Partners.

"And I also want to announce that we have approved the acceptance of the future new format of the Club World Cup."

Bartomeu's parting bombshell has been met with derision by La Liga president Javier Tebas, who says the "imaginary competition" would ruin Barca.

He tweeted: "Unfortunate @jmbartomeu statement on his last day about @fcbarcelona joining a weak and imaginary competition which would be their ruin. It confirms his ignorance about the football industry. Sad end for a president with successes and lately many mistakes."

Bartomeu's fate has perhaps been determined since he was heavily criticised by Gerard Pique and then Lionel Messi, who was furious that a summer exit from the Catalan club was blocked by the president.

Bartomeu did not have much widespread support and was due to face a vote of no confidence in next month's election after the Spanish government gave the green light for voting to go ahead.

However, he decided to resign to prevent people having to travel to the Nou Camp to vote during the coronavirus crisis, knowing the likely outcome of the vote.

"I have always accepted criticism," he added. "They say I have a great capacity for resilience. I do not know. What I do know is that I have gained enough experience, together with my fellow board members, to know what reality to live with from the direction of the club. 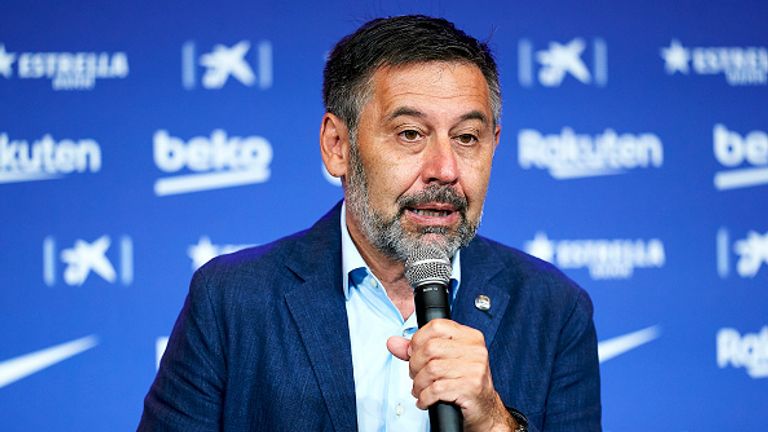 "And I have always defended that our self-criticism makes us stronger, and that Barca is always reinforced by critical episodes.

"But what we have experienced in recent months exceeds any limit. My board members and I have been disrespected; I've been insulted, threatened even, me and my family. Also to all my fellow board members."

An interim board of directors has been convened until March's elections.

Cristiano Ronaldo will miss a hotly-anticipated reunion with Lionel Messi after another positive Covid-19 test ruled him out of Juventus' Champions League match against Barcelona on Wednesday.

Ronaldo has been self-isolating since he tested positive while on international duty with Portugal on October 13.

He returned another positive result last week, but underwent further testing in a bid to prove his fitness ahead of Juventus' blockbuster tie against Barcelona.

But Sky Italy confirmed Ronaldo failed to test negative 24 hours ahead of kick-off, as required by UEFA in order to play.

The 35-year-old's potential reunion with rival Messi was the standout fixture when the Champions League groups were drawn.