Paul Rogers, Roma's chief strategy officer: "To have seven young people reunited and home safely is incredible, and I think there can be more in the future... It has been an incredible success and I think it's in line with what people want from football clubs right now" 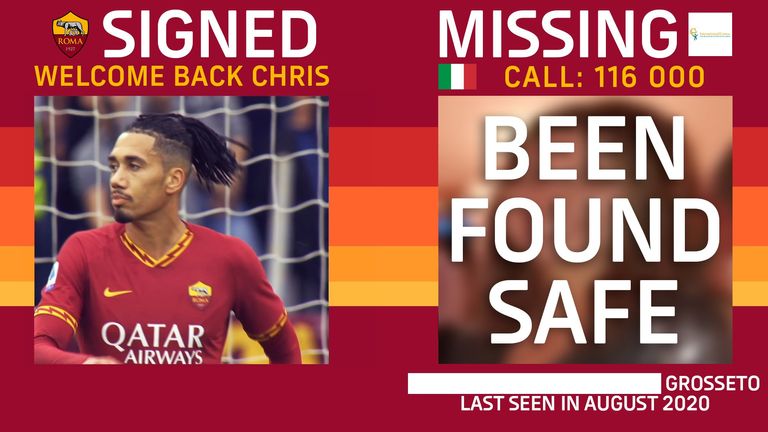 Football clubs have a duty to use the power of social media "for social good", says Roma's chief strategy officer Paul Rogers, after their 'Missing Children' Twitter initiative helped find a seventh child.

The Serie A outfit launched the campaign just over a year ago. Every time Roma sign a new player, an announcement video posted on their Twitter account is accompanied with pictures of missing children - to increase awareness of the search for them.

Chris Smalling sealed a permanent move to the Stadio Olimpico from Manchester United on Transfer Deadline Day, and tweeted his support for the scheme after a seventh child, a 17-year-old from Italy, was found safe after being reported missing.

Videos featuring the individual and other missing children were used to confirm the arrivals of Smalling, Pedro, Marash Kumbulla and Borja Mayoral during the latest transfer window, and have been viewed over two million times on Roma's social media pages.

The club's work, in collaboration with charities Missing Kids in the UK, Telefono Azzurro in Italy and National Center for Missing and Exploited Children in the USA, has seen one girl in Italy, three teenagers from England, a young boy from Belgium and two children from Kenya found safely after appearing in their transfer videos.

Rogers, who has been heavily involved in Roma's campaign since the outset, feels humbled by the programme's success and believes it has had a productive impact upon the online football community.

He told Sky Sports News: "We have had parents of children who are missing reach out to us just to thank us, or to ask us to feature their children.

"When they see a football club posting a video of their missing child in front of millions of people it gives them hope that people are still looking for them.

"To have seven young people reunited and home safely is incredible, and I think there can be more in the future.

"I think there is traction on social media from all fans, not just those of Roma, they understand the role that they can play by simply retweeting.

"Then it increases the awareness of people on their timeline and then they might recognise someone.

"It has been an incredible success and I think it's in line with what people want from football clubs right now.

"Particularly after the year we've had with coronavirus, in the context of the big money that players earn, I think they expect football clubs to stand for something now.

"That resonates very well on social media, people want to play their part in making the world a better place."

After the latest reunion between a child and their family, Caroline Humer, Vice President of Programs at the International Centre for Missing and Exploited Children, said: "Finding and bringing a missing child home to their family is always an amazing day for us.

"We are so grateful for our partnership with AS Roma and for their willingness to highlight this global issue by displaying photos of missing children. We also want to thank their fans for their support."

'A way of raising awareness for the social media generation'

In recent seasons it has become highly fashionable for clubs to employ new and innovative ways to announce their summer or January transfer window acquisitions online.

Serie A side Bologna confirmed left-back Aaron Hickey had joined from Hearts with a video displaying a panorama of the Scottish highlands and a makeshift Loch Ness monster, with bagpipes playing in the background.

Roma were responsible for posting this interesting piece of content when they signed Patrik Schick from Sampdoria in 2017...

Roma's numerous Twitter accounts cater for over 15 different languages and their overall presence on the site amounts to around three million followers.

The idea for Roma's 'Missing Children' scheme stems from the music video for rock band Soul Asylum's 1993 song Runaway Train. It displayed missing children around the world and urged MTV and VH1 viewers to help find them.

Paul explained: "The idea was: could we do something for the social media generation around the same idea?

"At that moment when you announce a player a lot of people see it and what we needed was awareness of these children."

'Clubs can use their platforms within the wider world'

Earlier this year, Italy's coronavirus death toll was among the highest in the world, and latest figures show over 36,000 people have passed away there due to the disease.

Paul says that placing an emphasis on global social media reach and sharing positivity for digital audiences is an important tool for football clubs in the current circumstances, with many fans struggling directly or indirectly from effects of the pandemic.

"When they [parents] see a football club posting a video of their missing child in front of millions of people it gives them hope that people are still looking for them."

"We have hundreds of thousands of followers on various accounts so it is an incredible audience we can reach," he added.

"From everyone at the club, the ownership down to the players, everyone understands what an impact it can have and the role that Roma can play.

"For 90 plus years we have been supported by our fans. At the moment, we obviously can't have fans in the stadiums, certainly not in the numbers we had before lockdown.

"Now it is our turn to support our fanbase because we have benefitted for so many years through their support.

"I really think it's about using social media for social good; we have built up a following of football fans around the world, not just followers of Roma.

"We all have supporters that are maybe suffering with Covid-19 in terms of loss of life but also with the economic impact that is being felt by many people."

Rogers believes an increased number of players are beginning to recognise their position of being able to impart "social good", for the benefit of football and wider society.

Smalling and Inter Milan forward Romelu Lukaku also criticised Italian sports newspaper Corriere dello Sport last year after images of the pair appeared alongside a controversial 'Black Friday' headline, ahead of a game between Roma and Inter in Serie A.

"Marcus Rashford's work this year has been unbelievable, and other players like Romelu Lukaku at Inter Milan, Chris Smalling here, lots of players are using their platform to try and make a difference in the world," Rogers added.

"Roma and AC Milan for instance have been very vocal about racism in Italian football, it's really about using the platform you have in a responsible way.

"I think people look at these instances and think this is the power football can have, it is about clubs using their position within the wider world."