Giovanni van Bronckhorst knows Rangers "need points" against Liverpool; they are without a point or a goal at the halfway stage of their Champions League campaign; midfielder Glen Kamara is a doubt for the match at Ibrox 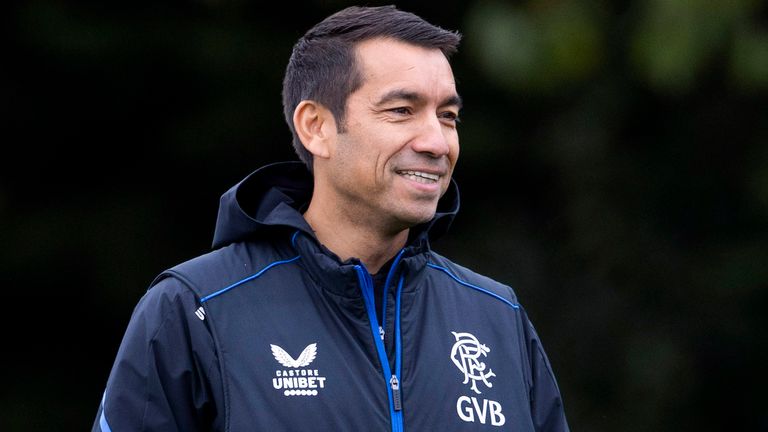 Rangers manager Giovanni van Bronckhorst wants his players to "be brave" against Liverpool to keep their Champions League hopes alive, as he predicts a "hectic game" at Ibrox.

Rangers are looking for their first point and first goal of the campaign when they take on Jurgen Klopp's side again on Wednesday night.

Van Bronckhorst was accused of being too negative in last week's 2-0 defeat at Anfield, but the manager is hoping a sell-out Ibrox support well help his side this time.

"I think we have to find more moments in the game when we can be dangerous," the Dutchman said.

"Our approach will be different tomorrow because we need points to hopefully play after the break in Europe, but we're still going to play a really good side.

"Especially at home we've had some strong performances, not only last season but this season.

"I think the game we played against Napoli was a really good one. I think that game also gave us confidence to get something out of our home games and tomorrow is another chance for us to get points.

"We need to attack, but we need to defend really well because we're playing against a side that can do both.

"It's going to be a very hectic game and I think again the Ibrox crowd will push us to another good performance."

Rangers sit bottom of Group A at the halfway stage of the campaign, but are just three points behind Ajax.

Van Bronckhorst knows there is no margin for error if they are to have a chance of the consolation prize of dropping into the Europa League.

"We need to get points. Ideally three points and we have to see the other results," he said as he revealed midfielder Glen Kamara is a doubt for the match.

"But we want to be able to proceed in Europe when we play our last game at home against Ajax.

"Hopefully we are in a situation where, with a good result, we can continue in Europe. That means also we have to get points out of the next two games because Ajax are already on three points.

"Of course Liverpool, as I said last week, have been three times to the Champions League final in the last five years.

"They have an excellent coach and a big squad, a squad that is very balanced even with the injuries they have now. And they can field a really strong side."