Match report as Edinson Cavani and Bruno Fernandes doubles, plus strikes from Paul Pogba and Mason Greenwood, leave Man Utd on verge of Europa League final; Roma had scored two away goals but United hit back with five unanswered second-half goals to take control of semi-final

Manchester United produced a scintillating second-half fightback to put one foot in the Europa League final with a thrilling 6-2 semi-final first-leg victory over Roma at Old Trafford.

United looked shell-shocked and out of ideas but wrestled back control with a devastating attacking display as Edinson Cavani's double, Fernandes' second from the penalty spot, Paul Pogba's header and Mason Greenwood's sixth saw them score five unanswered goals.

Roma, who were forced into three substitutions before the interval due to injury, grew wearier with each passing minute and were fortunate to escape Old Trafford without conceding seven like they did in 2007, though that will come as little consolation to Paulo Fonseca's side as their hopes of reaching the final were effectively ended.

Man of the Match: Edinson Cavani.

Pogba skipped around two Roma challenges before feeding the ball up to Cavani who, with his back to goal, released Fernandes with a first-time pass which the Portuguese lifted delicately and devastatingly over on-rushing goalkeeper Pau Lopez.

United's perfect start lasted barely five minutes, with Pogba harshly penalised for handball while sliding in to block Rick Karsdorp's cross. The Frenchman deflected the ball onto his arm at close proximity, but the referee stuck with his decision, handing Roma captain Pellegrini the chance to score an away goal, which he took emphatically.

Roma's injury problems worsened on 25 minutes as goalkeeper Pau Lopez was forced off with a suspected dislocated shoulder seconds after parrying Pobga's drive from the edge of the box. Veteran 37-year-old stopper Antonio Mirante came off the bench, but Roma's concerns soon turned to joy as they took control of the tie.

The lively Leonardo Spinazzola made inroads down the left flank, shifted the ball inside to former United forward Henrikh Mkhitaryan who released Pellegrini in behind, and he squared for Dzeko to bundle in his customary Old Trafford goal.

Spinazzola became the third Roma player forced off through injury, a setback which didn't look to have derailed the Italians until the stroke of half-time, when Cavani intercepted centre-back Ibanez's wayward pass, but the Uruguayan was thwarted by Mirante in goal before Amadou Diawara blocked his follow-up shot.

United re-emerged from the break reinvigorated and needed just three minutes to draw level, with Cavani wrapping a clinical effort into the top corner of the Roma goal having held up play and exchanged passes with Fernandes.

The goal marked to start of a period of domination from Solskjaer's side, with Cavani restoring United's lead with a tap-in after Roma goalkeeper Mirante spilled Aaron Wan-Bissaka's drive.

Three became four on 71 minutes when former United defender Chris Smalling was penalised for a late foul on Cavani in the area, and Fernandes confidently converted his 20th penalty in United colours.

With Roma out on their feet, Pogba glanced in a header from Fernandes' inch-perfect cross and there was still time for substitute Greenwood to get in on the act with a deflected sixth which ensured a once-promising night for Roma ended with more Old Trafford misery and left United on the brink of another Europa League final.

Man Utd boss Ole Gunnar Solskjaer: "The job is not done, but it was a job well done. Roma have got quality, scored two goals with their two chances we gave them in the first half, but I was very pleased with the response. The second half was very good.

"We know we've got creative players; it's about getting them up there in good positions. We took most of our chances, I am very pleased. The character showed, the players didn't lose their heads.

"For five minutes at the end of the first half we didn't look great, but we managed to get ourselves together. The two goals were down to very schoolboy errors, they should not happen at this level, we said that at half-time and corrected it." 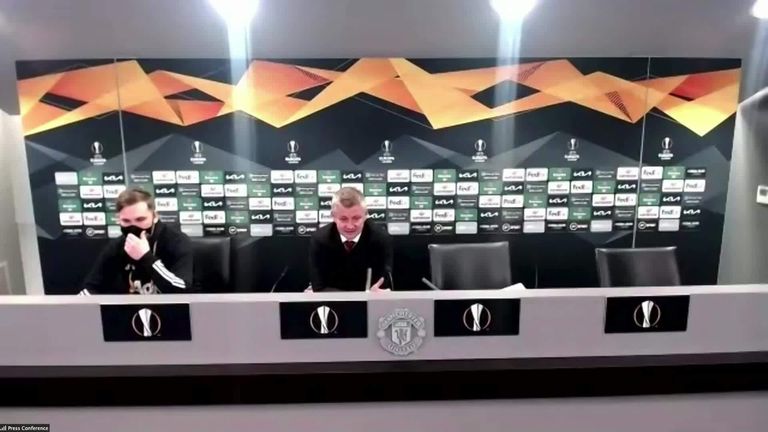 Manchester United manager Ole Gunnar Solskjaer was full of praise for his side's second half performance in their 6-2 win over Roma in their Europa League semi-final.

Roma head coach Paulo Fonseca: "It's a heavy defeat. We had a good first half, but we didn't exist in the second. It's difficult to explain how the same team that did so well in the first half had that kind of second half. It's hard to play against a side like United without having the substitutions [to make in the second half].

"Even the Manchester United coach was very honest [about Smalling's tackle on Cavani] and didn't think it was a penalty either. I really didn't think it as a penalty. It was a decisive moment in the game and it was tough to take."

Man of the Match - Edinson Cavani

Edinson Cavani made it 50 goals in major European competition (15 in Europa League, 35 in Champions League), with the Manchester United attacker, at 34 years and 74 days, the oldest player to score a brace at the semi-final stage or beyond in major European competition since Philip Cocu (34y 187d) for PSV vs Milan in the Champions League semi-finals in 2004-05.

Manchester United host Liverpool on Super Sunday at 4.30pm - live on Sky Sports Premier League - while Roma travel to Sampdoria in Serie A on Sunday at 7.45pm. United then travel to Rome for their Europa League semi-final second leg on Thursday at 8pm.