Giovanni van Bronckhorst on picking his Rangers players up for Scottish Cup final after Europa League defeat by Frankfurt: "We are flying back with only one day to prepare, it will not be easy but we will do it, we will be ready for Saturday and try [to finish] with a trophy."

Rangers boss Giovanni van Bronckhorst says "it will not be easy" to pick his players up for Saturday's Scottish Cup final after their Europa League heartbreak in Seville.

Rangers were a penalty shootout away from winning European silverware for the first time in 50 years before Aaron Ramsey's miss at the Ramon Sanchez-Pizjuan Stadium allowed Frankfurt to edge to victory after 90 minutes plus extra time had failed to separate the two sides.

Van Bronckhorst's side collected their runners-up medals barely 64 hours ahead of taking to the pitch at Hampden Park against Hearts in Saturday's Scottish Cup final, a trophy they have not lifted since 2009.

With the Europa League final finishing past midnight local time, Van Bronckhorst and his players face a quick turnaround ahead of the domestic showpiece, both physically and mentally after an exhausting - and ultimately disappointing - night in Spain.

"Of course it's not going to be easy to get them ready because it's emotional," Van Bronckhorst said. "We are hurt and disappointed. We had the biggest game of the year last night but we have to play on Saturday.

"We are flying back with only one day to prepare, it will not be easy but we will do it, we will be ready for Saturday and try to end the season with a trophy." 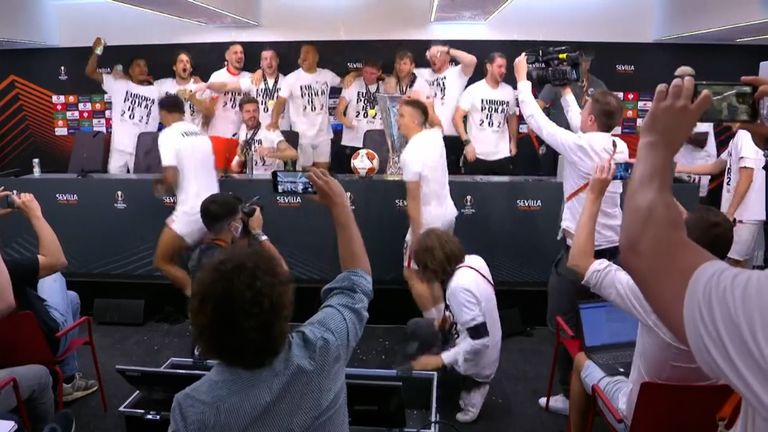 The former Netherlands captain was pleased with his players' efforts during 120 minutes in Spain and also in reaching their first final in 14 years.

"It was of course a big disappointment. If you lose a big final in Europe it will hurt," he added.

"You do everything you can to win it and in the end it is a lottery and we weren't on the good side.

"But I can't complain with what my players gave and before tonight but in the end it was a really tight game, it went all the way to penalties and we lost.

"It is a big disappointment because you are so close to winning a trophy but that's also football.

"If you play a lot of big games, big finals, we will have memories that last forever when you win them but when you lose it will hurt a lot.

"I lost the World Cup final - the biggest game there is and also a huge disappointment - but we have to move on, we have a big game on Saturday and next season we have to start all over again."

Wales manager Robert Page insists Ramsey will recover from his Rangers penalty misery and has endorsed him to take a World Cup play-off final spot-kick should he be needed to.

But Page has backed Ramsey to take a spot-kick against Scotland or Ukraine in Cardiff on June 5 should qualification for Qatar 2022 be decided by a shoot-out.

Asked if he still had faith in Ramsey, Page replied: "Absolutely, 100 per cent. It happens to the best in the world. Top players, they put themselves up.

"I am so proud of him for putting himself up (to take a penalty for Rangers), he is a world-class footballer.

"He had the courage and conviction to take a penalty. Top players recover from that, no problem. I have no doubt whatsoever if it comes to penalties that he will take one."

The Gers manager brought on Ramsey and Kemar Roofe late in extra-time with an eye towards penalties and refused to point any blame on the Wales international.

He said: "We prepared well for penalties. Borna (Barisic) had to go off and he is one of the first penalty kickers.

"We had players who wanted to take a penalty and some who didn't and we had our list ready and we had to adjust it because of the substitutes.

"It is never nice to lose, everyone is hurt and disappointed.

"Aaron, of course, was disappointed but he took responsibility to take the penalty.

"You can make it or miss it and unfortunately for us he didn't make it but you want players taking penalties who are ready and comfortable also."

He said: "We had a big chance in the end, it was a great save.

"Especially in those minutes toward the end of the game any goal is decisive.

"It was a big chance, but in the end when you have chances you have to take them but again Ryan did everything he could to score."

Lundstram: We've let everyone down

John Lundstram was perhaps lucky not to face further punishment following an early accidental but potentially dangerous high foot on Sebastian Rode, before continuing to put on a typically all-action performance which saw him go down with cramp late on.

The Liverpudlian was left emotional after the final whistle in front of a Rangers crowd far in excess of their official allocation of 9,500.

"I don't think both teams performed great. We could have played better - it's hard to perform on a big stage like this," he told BT Sport.

"It's nervous for everyone. I'm just severely disappointed to let everyone down. The Rangers fans have travelled out here and given us three quarters of the stadium. It's heartbreaking."

Steven Davis, who was part of the Rangers squad beaten by Zenit St Petersburg in the UEFA Cup final in 2008, said his side had given their all but conceded reaching the heights of a European final would be a tough feat to repeat.

"It's a huge disappointment. It's hard to reflect straight away," he said. "The boys have been tremendous, but it hurts tonight. Unfortunately we were on the wrong side of [the penalties]. Whenever you get to a final it hurts if you don't come away with the trophy.

"But I couldn't be more proud of the lads, staff and fans. We left everything out on the pitch. It's going to be a sore one to take. We know how difficult it will be to get to this stage again."

Captain James Tavernier took - and scored - Rangers' first penalty in the shoot-out, and said the dressing room would rally around itself ahead of Saturday's Scottish Cup final.

He said: "I'm devastated. It hurts but I'm proud of every one of them who stepped up and took one.

"We went toe to toe with them, I'm disappointed because we took the lead. Their keeper made a fantastic save with Kent towards the end.

"I'm proud of every single person involved in Rangers. We've got to use this fuel to push us on. We want to be back in finals and have a massive game on Saturday. We're a close-knit dressing room, we'll get around each other."