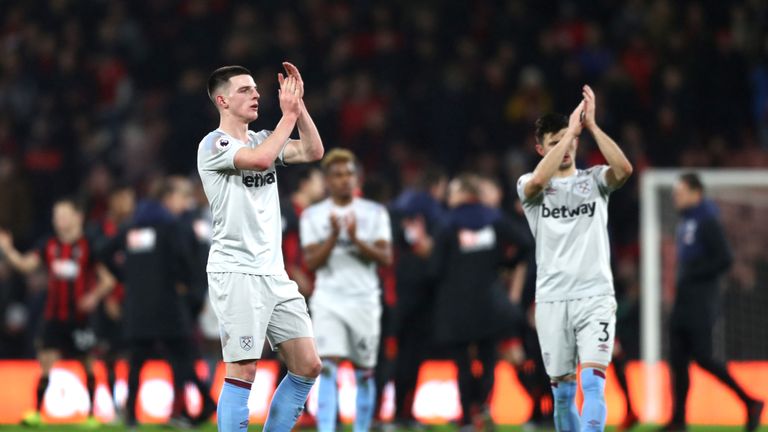 Declan Rice has spoken out for the first time since committing his international future to England over the Republic of Ireland, calling it "the toughest decision" of his career so far.

Rice, who has Irish grandparents, played for the Republic at youth level and was capped three times at senior level in friendly matches in 2018, but last month switched his allegiance to England, the country of his birth.

The 20-year-old has enjoyed continued success at club level with West Ham this season, attracting the attention of England boss Gareth Southgate, as well as earning him the Young Player of the Year accolade at the London Football Awards on Thursday.

Speaking after collecting the prize, Rice told Sky Sports News of his excitement at the prospect of joining up with the national squad.

"It is the toughest decision I have had to make so far in my career," he said.

"Being so young, I didn't think I would ever be in a position to make that call but it's one that I have made and one that I am looking forward to in the future."

It has not been entirely plain sailing for Rice. He was taken off at half-time by manager Manuel Pellegrini on the opening day of the season in a 4-0 thrashing at Liverpool.

But, both Rice and West Ham's displays have improved steadily as the campaign has worn on and the midfielder says he is all smiles now.

"Last year I made some mistakes but I have bounced back from that," Rice said. "I got subbed at Liverpool, knowing I had to work harder to get back in the team.

"But I have found my place in the team, the manager has shown a lot of belief and trust in me. I am really grateful to him for that.

"I am loving it, I am really enjoying it. Last year was tough because I was in and out of the side and the start of this season was tough.

"I am playing with a smile on my face, which is the main thing."

Declan Rice was speaking at the London Football Awards, which are held to raise funds for the Willow Foundation - a charity that provides special day experiences for seriously ill 16-40 year olds.