Chelsea midfielder Mason Mount missed England training on Tuesday and instead did recovery work in the gym; England play Poland at Wembley in World Cup Qualifier on Wednesday; Robert Lewandowski to miss game for Poland

Mason Mount is an injury doubt for Wednesday's World Cup Qualifier against Poland after missing England training on Tuesday.

The Chelsea midfielder undertook recovery work in the gym, while the rest of the 24-man squad trained ahead of the game at Wembley.

Mount scored England's second goal in the 2-0 win over Albania in Tirana on Sunday and was in terrific form as Gareth Southgate's side made it two wins from their first two Qatar 2022 World Cup qualifying games.

The playmaker, who has four goals in 15 caps for England to date, also featured for 45 minutes in the victory over San Marino and played Raheem Sterling in for England's third goal before being replaced by Borussia Dortmund's Jude Bellingham at half-time. 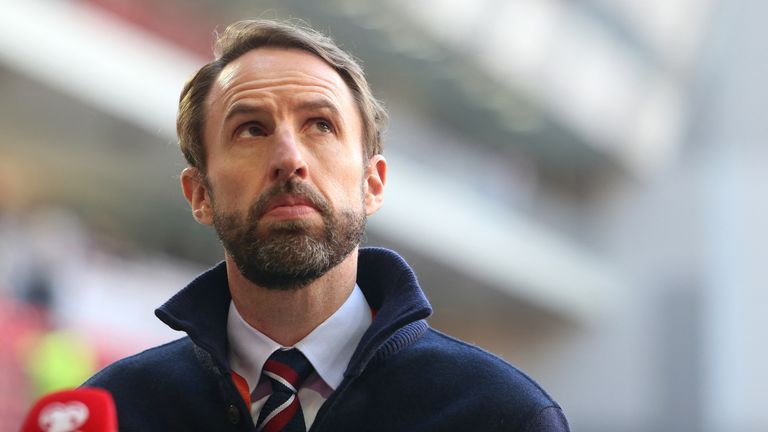 England vs Poland will go ahead as planned, despite four Poland players testing positive for Coronavirus, Rob Dorsett explains.

Ahead of the game at Wembley on Wednesday, Poland have confirmed there have been four coronavirus cases recorded in their camp, but the Polish Football Association still expect the game to go ahead as planned.

Paulo Sousa's side will also be without their key talisman Robert Lewandowski for the game after the Bayern Munich striker returned to the Bundesliga club following a knee injury sustained in Poland's 3-0 win over Andorra.

Mason Mount already looks a shoo-in for Gareth Southgate's Euro 2020 squad and recent evidence suggests he will have a place in the starting line-up too.

The 22-year-old followed up his eye-catching performance in the 5-0 victory over San Marino with another impressive showing against Albania on Sunday as England continued their winning start to World Cup qualifying with a 2-0 victory in Tirana.

Southgate praised Mount for "setting the tone" against San Marino and he was similarly influential against Albania, scoring his fourth England goal in his 15th appearance when he latched onto Harry Kane's pass and finished coolly into the corner.

Mount was one of five players to keep his place in the side from Wednesday's win at Wembley but what's more telling is he is the only one to have started their last seven in all competitions.

It's a run which dates back to the Nations League win over Belgium in October and it reflects his growing importance to Southgate.

There was a rare moment of sloppiness early on when he gifted possession to Albania following an England corner, allowing the hosts to break forward, but he barely put a foot wrong after that.