Scotland midfielder Billy Gilmour has tested positive for Covid-19 and will miss Tuesday's game against Croatia; England’s 26-man squad have all returned negative results and trained on Monday ahead of their final Group D game against the Czech Republic 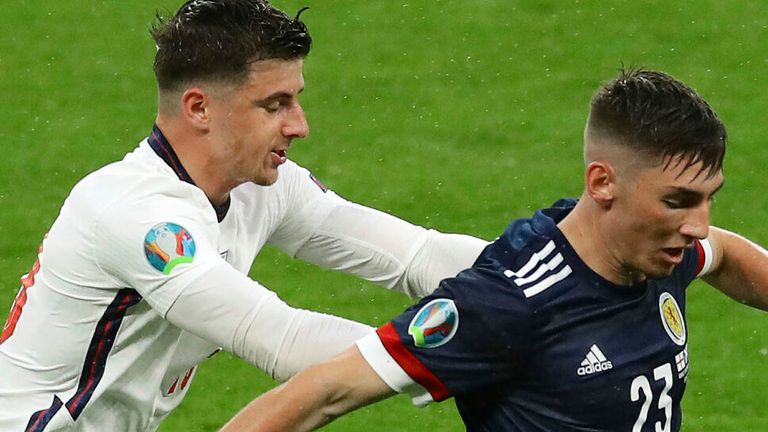 Billy Gilmour will isolate for 10 days after testing positive for coronavirus and will miss Scotland's crucial Euro 2020 game against Croatia on Tuesday.

The 20-year-old made his full international debut against England on Friday, producing a man-of-the-match performance as Scotland claimed a goalless draw at Wembley.

But he will be absent for their crucial game against Croatia at Hampden Park and also a potential round-of-16 tie should Scotland qualify for the knockout stages of a major tournament for the first time.

No other players are understood to be have been affected or identified as close contacts, meaning the remainder of the squad will be available.

England's 26-man squad have all returned negative Covid-19 results and trained on Monday ahead of their final Group D game with the Czech Republic.

"The Scottish FA can confirm that a member of the Scotland national team playing squad, Billy Gilmour, has tested positive for Covid-19," the SFA said in a statement.

"Having liaised with Public Health England since the positive test was recorded, Billy will now self-isolate for 10 days and therefore miss tomorrow's UEFA EURO 2020 Group D match against Croatia at Hampden."

The Football Association confirmed all members of Gareth Southgate's squad, along with the wider support team, returned negative results after Sunday's latest round of UEFA-organised PCR testing.

The governing body remains in contact with Public Health England as preparations continued for the match against the Czech Republic at Spurs Lodge. 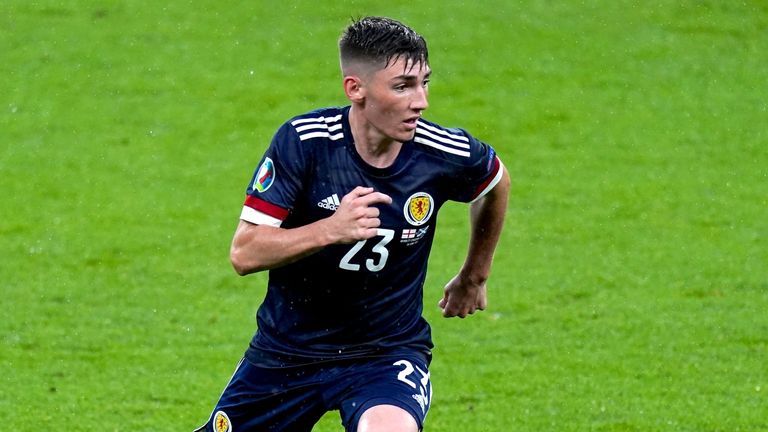 Having outshone a string of Premier League players in London on Friday night, Gilmour was expected to start again against Croatia, with the tantalising prospect of him going head to head with Real Madrid midfielder Luka Modric.

But Clarke will now need to rethink his plans. Manchester United midfielder Scott McTominay, who slotted back into a defensive role against England, is likely to be returned to his usual position protecting the back three.

Gilmour's positive test is the second to hit the Scotland camp since the squad met up earlier this month.

Sheffield United midfielder John Fleck sat out both of the Scots' warm-up fixtures against Holland and Luxembourg after contracting the virus.

Another six players missed the 2-2 draw with the Dutch as a precaution, although they were not formally designated close contacts of Fleck.

Clarke is due to hold a press conference on Monday at 5.45pm.​

Former Scotland midfielder Graeme Souness says the loss of Gilmour "knocks us sideways" as Clarke's side target a place in the knockout stages.

Despite only making his full debut against England, Souness believes Gilmour is already an integral player for Scotland.

"He was the best player on the pitch the other day," Souness told Sky Sports News. "It's an enormous blow for him, but what a blow for the nation.

"Just when things were looking good; we were playing good football and he was the star of the show. For this to happen, it knocks us sideways.

"That midfield trio of Callum McGregor, John McGinn and Gilmour were fabulous against England. They were good on the ball, they hunted it down and looked a really strong three. This is an almighty blow for us."

Souness says Gilmour repaid the faith shown in him with a standout performance against England and looked unfazed despite the stakes being so high.

"At 20 years old, what a debut," he said. "He only had five starts for Chelsea in the Premier League last season so I thought he was going to tire in the second half. But he's obviously got a very good engine, he kept going.

"Going into that game, sometimes even senior players burn themselves with nervous energy. He showed no signs of that and the football he played on that stage, with the pressure on the team, was quite outstanding.

"What a player he's going to be. He keeps the ball in tight spaces and his first thought is to get it forward into the strikers, and he's not afraid to get involved in the meatier side of the game.

"He's an enormous prospect and it's an almighty blow. We'll miss him. I know it sounds daft - his first international game, 20 years old - but we will miss him against Croatia."