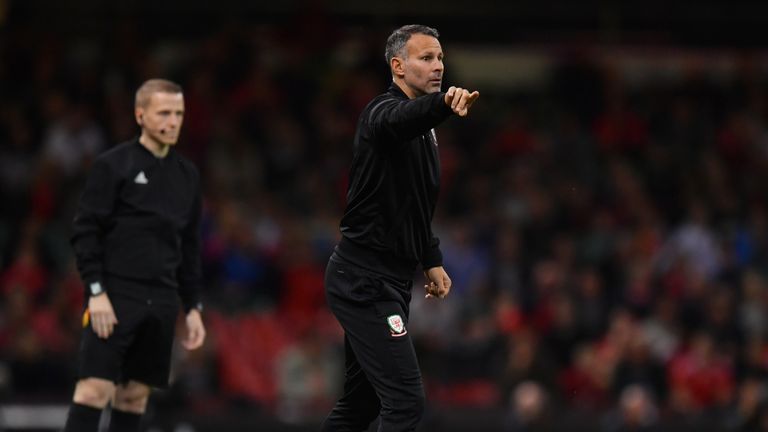 Wales manager Ryan Giggs has admitted his side are wary of Denmark talisman Christian Eriksen, who could "make the difference"

Wales are determined to stop Christian Eriksen and prevent the Dane sinking the side once again, says boss Ryan Giggs.

Eriksen ran the show and scored twice when Denmark beat Wales 2-0 in Aarhus in September.

The Tottenham playmaker missed Denmark's 0-0 draw with the Republic of Ireland last month through injury, but is back to take on Wales again in Cardiff with promotion to the top tier of the Nations League at stake.

Victory for either side would see them join the elite of European football, while a draw would leave Denmark needing to beat the Republic in their final game at home to take top spot.

"He's a fantastic player and was the difference in Aarhus," Giggs said of Eriksen at his pre-match press conference.

"We have to be aware of his qualities and we are. But it's one thing setting out a plan to stop him, it's another actually doing it.

"He's up there as one of the top Premier League performers, and he's done it for a consistent amount in both scoring and making goals.

"He can be the difference, but it's the same for them trying to stop our quality players hurting them."

Wales' own talisman Gareth Bale has been declared fit after picking up an ankle injury playing for Real Madrid on Sunday.

"He's good," Giggs said of Bale's state of fitness. "He arrived a little bit later than the rest of the group after playing on Sunday evening.

The winners of the clash, shown live on Sky Sports, would also move to within two games of qualifying for Euro 2020
through the Nations League play-offs.