Paul Pogba removed a bottle of Heineken beer that had been placed in front of him at a Euro 2020 news conference on Tuesday, a day after Cristiano Ronaldo moved aside Coca-Cola bottles in a similar set-up.

France midfielder Pogba, a practising Muslim, removed the bottle - which happened to be a non-alcoholic version - when he spoke to the media after he was named man of the match in France's 1-0 Group F win over Germany in Munich.

On Monday, Portugal captain Ronaldo removed two bottles of Coca-Cola at a pre-match news conference and said "agua" in Portuguese, appearing to encourage people to drink that instead.

Sky Sports News has requested comment from Heineken and Coca-Cola, who are both official sponsors of Euro 2020. 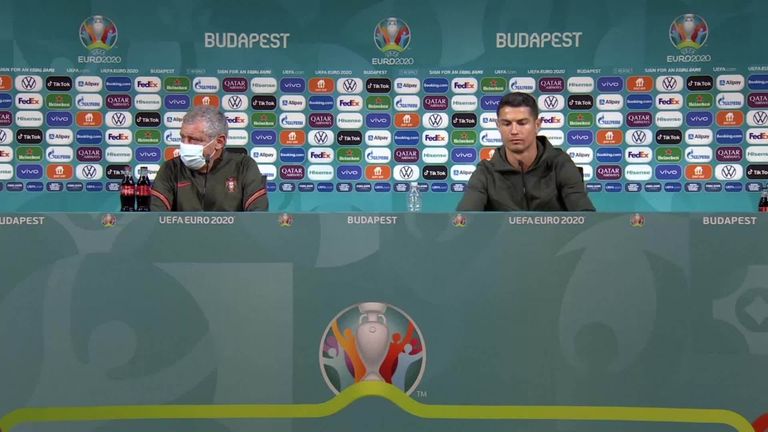 Cristiano Ronaldo removes the official tournament sponsored bottles of Coca-Cola in front of him and replaces them with a bottle of water instead. (Pictures: ©UEFA 2021 )

However, after the initial slump, Coca-Cola's share price bounced back again fairly quickly.

On Tuesday, Ronaldo scored twice in Portugal's 3-0 win over Hungary - moving in front of France great Michel Platini as the record goalscorer at the European Championship finals with 11.