Bundesliga return: What did we learn from the first major league to resume playing?

"By most metrics the first part of this experiment has been a success. It did feel unusual, but it was still football"

With the eyes of the world on the Bundesliga, how did their return go? From social distancing goal celebrations to substitutes wearing masks, what did we learn?

Elite level football returned for the first time since the coronavirus pandemic lockdown on Saturday with the Bundesliga undergoing their restart procedure.

With the Premier League planning to go down the same route in June, there was much interest regarding the logistics of staging a football match behind closed doors and the protocols that needed to be adhered to.

Despite lockdown being eased further on Friday in Germany allowing cafes, restaurants and bars with outside seating to reopen, football returned behind closed doors in an almost empty stadium.

A maximum of 300 people were allowed into each stadium, a maximum of 100 into the 'interior', 100 into the concourse and a further 100 around the perimeter. All those entering the stadium needed to go through the necessary safety checks on entry, including having their temperature taken and masks had to be worn.

Watching on from afar via TV coverage, it was an eerie almost surreal experience watching top-level footballers lining up for a top-flight game where you could hear a pin-drop instead of the usual pre-match excitement from the stands. Dortmund played "You'll Never Walk Alone" on their sound-system but it didn't quite produce the same buzz as it usually generates as the players skipped the usual pre-match rountines of handshakes, team photos and the coin toss. There were also no mascots.

When the game kicked off, every meaty pass could be heard on the microphones. Every collision between players could be felt at home. Dortmund striker Erling Haaland's scream when he was caught late by Schalke defender Salif Sane in the build-up to Dortmund's third goal in their 4-0 win pierced through at home.

Haaland was fortunately fit enough to continue as he stole the show with a performance that backed up the view that he's the most exciting young striker in Europe.

Despite periods of almost dead silence, especially when the game was over at 4-0, the game did not lack for intensity despite the absence of crowd noise. Thomas Delaney was booked for a fierce flying elbow on Suat Serdar in the first half to rubberstamp the notion that these games will be played with the usual competitive edge.

"It was very, very special," Dortmund coach Lucien Favre said in the virtual post-match news conference. "There's no noise, you create a chance, you play a top pass, a goal and ... nothing. It's very, very weird. We miss our fans very much. It was just a very different match." 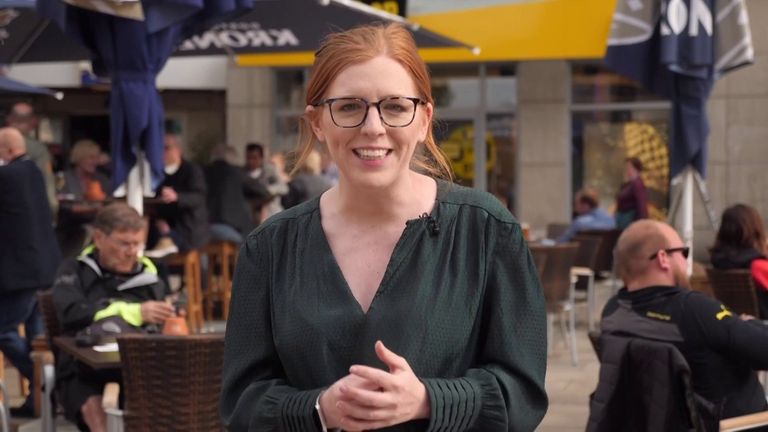 Did the fans stay away?

As with matches across Germany, along with no fans being permitted inside the stadium, the streets surrounding it were also cordoned off by police. Concerns had been expressed over whether fans would congregate at stadiums like Borussia Dortmund's Westfalenstadion. Germany has the highest average attendance figures for football in Europe and Dortmund's players are used to playing in front of 80,000 every week.

However, the threat of matches being immediately abandoned if fans turned up en masse outside the ground seemed to be enough of a deterrent.

From the pictures below you can see team buses were met with an unusually quiet welcome to the ground at Dortmund's Westfalenstadion.

Piggyback rides, team bundles and kissing your team-mate look to be a thing of the past for football in the foreseeable future. Players were instructed by the authorities in the aftermath of a goal, to remain vigilant and avoid celebrating with their teammates.

The perfect example of this was Haaland after scoring Dortmund's opener.

It was a cool finish from Thorgan Hazard's cross that took him to 10 goals in his nine league appearance for Dortmund. He instantly wheeled away in usual style towards the corner flag in celebration but jubilant team-mates kept their distance as four or five Dortmund players rather awkwardly celebrated on their own with Haaland orchestrating the dance.

Not all players stuck to the guidelines though as emotions ran wild for Hertha Berlin's third goal in their win over Hoffenhein. Matheus Cunha's effort was certainly the goal of the day following a mazy run down the left wing and a sublime finish that drew adulation from his peers - this was perhaps an indication of how eliminating the explosion of joy after a goal may prove problematic on certain occasions.

Also, in the early stages of Hertha's 3-0 win over Hoffenheim, Dedryck Boyata held teammate Marko Grujic by the neck and came into very close contact with him, a clear breach of the Bundesliga's guidelines on player contact.

Former Celtic and Manchester City defender Boyata accepts he was wrong to get so close to Grujic, who is on loan from Liverpool, but said he was only giving his team-mate some tactical advice.

"It wasn't a kiss, neither a celebration," Boyata wrote in an Instagram post, which also included a video of the incident.

"I apologise for putting my hands on @grujicmarko face. I was giving him instructions about a set piece.
We must definitely be careful now that we play under this situation. We have to adapt our way to play or celebrate."

Of course, playing football while maintaining social distancing is impossible due to the contact nature, but strict protocols are in place off the field to keep players two metres apart before, during and after the matches. The strangest situation for the onlooking fan was to see substitutes sat far apart from each other on the bench with all players wearing masks.

The TV manager interviews also bordered on the bizarre with the interviewer and coach two metres apart and the microphone covered in a plastic sheet.

Speaking on the Sunday Supplement, the Sunday Times' chief football writer Jonathan Northcroft said the return of the Bundesliga would feel like a 'big moment' for the watching Premier League and EFL clubs still waiting for the restart of the English domestic game.

"There's nothing like having a practical example to lead the way," he said. "I think there'll be a lot of relief about the fact the games were played were good games, and some of the issues we've been talking about, like fans congregating outside grounds, didn't seem to happen.

"The protocols more or less seemed to work, the note of caution we've all seen is that it wasn't quite football as we know it. You had the Revierderby, one of the biggest games in Germany, in a stadium that usually holds 80,000 people, against a backdrop of almost nothing. About 200 people in the stadium, it was nearly silent."

'Bundesliga return experiment was a success'

It looked and sounded different to normal in stadiums with no fans, no handshakes and virtually no atmosphere and with masks where there used to be mascots. But the first day of Bundesliga fixtures also passed without major incident.

There were no mass gatherings of fans outside stadiums causing fixtures to be abandoned. At the Signal Iduna Park, usually, 81,000 fans would have packed inside for the 180th derby match between Borussia Dortmund and Schalke.

Instead, just 213 were permitted, close to the minimum required for the match to be played, keep the players safe and make the match televised.

Sebastian Wessling, a German football writer, was just one of 10 journalists allowed inside after his temperature was tested and he agreed to wear a face mask throughout the game.

"The players didn't really celebrate," he said. "They kept a distance, only clapping, so it was a very very strange feeling, almost like a test game."

In Germany, the decision for the Bundesliga to return after more than two months away has divided some.

The ultra fans believe football without fans is not football at all, while others object on the grounds they believe it prioritises a game over the nation's health.

"There is a big part of the public that is also against it because they think we have enough other problems at the moment," said Wessling. "We don't have enough daycare for children. Schools are not starting but football is starting so we don't like that."

In the state of North-Rhine Westphalia, the lockdown was eased further on Friday allowing cafes, restaurants, and bars to reopen. Many Dortmund fans gathered inside the Maximilian Bar on the main market square to watch the derby on several big screens.

"It's a bummer we can't be inside the stadium to watch," one fan said, "but at least football is back, we have something to do with our weekends."

Another fan was conflicted. "From speaking to people I know some are angry because they think millionaires who kick a ball are being given special treatment."

On Monday Premier League clubs are expected to vote on whether to return to non-contact training and executives will be watching and assessing the success, or otherwise, of the Bundesliga experiment.

"We got calls and emails from big clubs in Spain and England and I know they really hope that we manage this situation so that other leagues can restart as well," Schalke sporting director Jochen Schneider said.

"We know how important it is to restart and finish the season as well," he added. "We all agree this situation will not change that much by August, September, October so if we are not able to play now, why will we be given the green light to play in September, October, November."

The return of football, with all the anticipation it provoked, wasn't normal, wasn't ideal. But it was still football and this is probably the only design by which the game can return in the middle of a global pandemic.