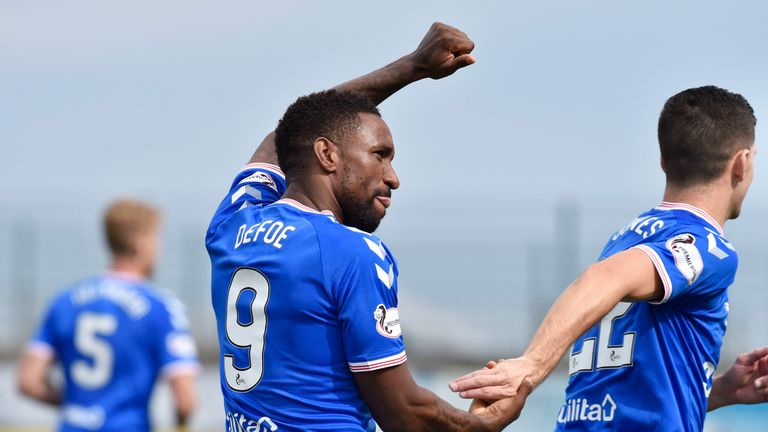 Jermain Defoe tells Sky Sports News he wants to stay at Rangers beyond the end of his current contract, which is due to expire next summer

Jermain Defoe, by his own admission, absolutely loves scoring goals. It's why he wants to stay at Rangers, why he wants to play into his 40s, and why Steven Gerrard has learned not to bother asking if he wants a rest...

On the eve of his 37th birthday, Defoe did what he has been doing for almost two decades. He scored a hat-trick, and in turn sent Rangers top of the Scottish Premiership ahead of rivals Celtic for the first time in 10 months.

It took Defoe to 12 goals in 14 games this season, and prompted Rangers fans to break into the chant which has become common place among the terraces at Ibrox.

"I remember the first time I scored for Rangers, the fans started singing the song and I spoke to my mum afterwards. She was just like 'wow'," Defoe tells Sky Sports News.

Getting to know the man behind the goals is well worth it. Defoe was awarded an OBE in November last year for his commitment and contribution to both football and charity. He dedicated the honour to his young friend Bradley Lowery, who passed away from a rare type of cancer last year.

Manager Steven Gerrard knows all about Defoe from their time as England team-mates. The pair are regularly in discussion over a new contract for the striker. He is on loan at Ibrox after agreeing an 18-month loan deal from Bournemouth in January.

"He's said to me he's delighted with how I'm playing but not just that, with how I am around the place with the younger lads, helping everyone," says Defoe. "It was nice for him to say that."

There's no doubt in Defoe's mind. His family love life in Glasgow. "I want to stay," he says. "It's a special football club - you feel it."

But Defoe is also looking well beyond next season. Asked if he could extend his career into his 40s, Defoe says: "The way I feel now, easily.

"I do everything right [to prepare for matches], which is easy for me. My recovery, training, knowing how to manage myself. All the things you should do, I do. I think it's showing in my performances."

Defoe's ability to man-manage himself is why he has not found working under a former team-mate in Gerrard difficult.

He's my ex-team-mate and he knows I love scoring goals.

Four wins from four with 17 goals scored and just one conceded since their defeat to Celtic in the first Old Firm derby of the season, Rangers will not have wanted the international break to disrupt their momentum. Gerrard has said it is too early for title talk after Rangers spent time on top before faltering last season, and Defoe has warned his team-mates to steer clear of any social media gloating.

"You don't want to boast about being top of the league, there's still a long way to go," he says. "We have to respect our neighbours, everyone in the league and continue what we're doing.

"When you're lifting the trophy at the end then you can do what you want and properly celebrate."