Manchester United and Manchester City among 15 Premier League clubs that are not accredited with the Living Wage Foundation; Chelsea were the first Premier League club to pay staff real living wage, with Liverpool, Everton, Crystal Palace and West Ham since following suit

Manchester food banks have called on the city's Premier League clubs to pay their staff the real living wage.

Manchester United forward Marcus Rashford has drawn widespread praise for his role in highlighting the issue of child food poverty, which has been exacerbated by the economic impact of the coronavirus pandemic.

However, his club and their near-neighbours Manchester City are not accredited with the Living Wage Foundation.

The chair of the city's central food bank, Matt Stallard, points out that many of the people who access the service are in work, but earn less than the living wage.

The living wage is currently £9.30 an hour across the UK except in London, where it is £10.75. The rate is set to change next week as part of Living Wage week.

The food banks and the Greater Manchester Citizens have written to club executives asking them to adopt the real living wage for all staff. 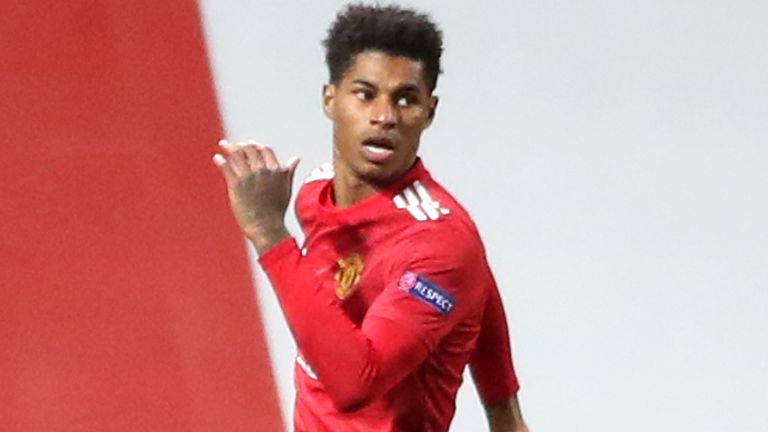 Sky Sports' Martin Tyler says Marcus Rashford's campaigning for free meals for school children is proof of how footballers can use their power in the right way.

"Whilst both Manchester City and Manchester United undertake a great deal of valuable work within our communities, there is one simple step that both clubs could take to reduce child poverty within our city.

"It's proven that the real Living Wage lifts families out of poverty - that's why Greater Manchester Citizens is calling on our two successful and wealthy football clubs to become Living Wage accredited."

Both United and City continued to pay staff in full during the first national lockdown rather than use the Government-backed furlough scheme.

United, along with the club's foundation and the FareShare charity, distributed 5,000 meals to children eligible to free school meals during the October half-term.

United said: "Given the size of the club and with such a varied workforce across a number of specialist areas, staff salaries do differ, depending on their remit.

"However, all permanent and temporary employees, whether engaged on a full or part-time basis, are paid the national living wage."

The national living wage for over 25s is £8.72 an hour according to the Living Wage Foundation website. The national minimum wage is £8.20 an hour and applies to anyone aged between 21-24.