Chelsea 0-0 Man Utd: Goals are a problem for Ole Gunnar Solskjaer against the top teams but why?

Do Manchester United have a mentality problem against the top teams? Do the tactics need to change? Assessing the stalemate against Chelsea and another goalless draw...

When Manchester United were thrashed 6-1 by Tottenham at the start of October, it was the woeful defending under scrutiny. Five months on and perhaps the greater curiosity is that Bruno Fernandes' early penalty that afternoon is still the last Premier League goal that United have scored against their big-six rivals.

The goalless draw away to Chelsea was not a bad result. It maintains the gap between the two clubs at six points. Ole Gunnar Solskjaer's side remain second and had little hope of catching Manchester City anyway. But it does mean that they have now failed to score in six consecutive Premier League matches against big-six opposition.

Defensive solidity has been restored. United have conceded only once in those six games - and that was Pierre-Emerick Aubameyang's second-half penalty at Old Trafford.

But the improved record at the back has come at a cost. The attacking players at United are repeatedly unable to make the difference in the biggest matches.

"I don't know this group. We are just guessing. But maybe it is their mindset going into these games.

"Sometimes you can have a 0-0 and the goalkeepers are fantastic, players are missing penalties, whatever. But some of these games we have covered have been really boring, considering there are some good attacking players on the team.

"The lack of goals from United with the good players they have got on the pitch might be something to do with their mindset."

There is no denying that there have been some sterile matches in that run of results. The Manchester derby in December saw the teams manage only two shots on target apiece. The stalemates with Liverpool and Arsenal in January lacked the usual tempo.

But was this really more of the same from Manchester United?

Not quite. The inclusion of Daniel James might have been seen as a move designed to put the focus on the counter-attack, but it was striking how United tried to press hard right from the outset as they unsettled Chelsea in their own defensive phase.

Indeed, United won possession in the final third on 11 different occasions. That is not only the most times that they have done that in a Premier League game this season, but the most that they have ever done so under Solskjaer. The last time United won the ball 11 times in that zone of the pitch was in beating Aston Villa under Louis van Gaal almost five years ago.

"It was difficult because they started with a high press," explained Chelsea boss Thomas Tuchel when speaking to Sky Sports afterwards. "We lost confidence with some ball losses."

His decision to opt for Olivier Giroud up front ensured that Chelsea had a target in the box but the Frenchman's lack of pace also allowed Harry Maguire and Victor Lindelof to play with a higher defensive line in the knowledge that there was no Timo Werner to race into the space left behind. It is a stylistic change that Gary Neville had been calling for all season.

"Both Maguire and Lindelof don't shift up," Neville told Sky Sports recently. "They don't move their feet three, four, five yards. They never do and they have to do it. If they don't start doing it, they're never going to get to a point where they're going to win the league." 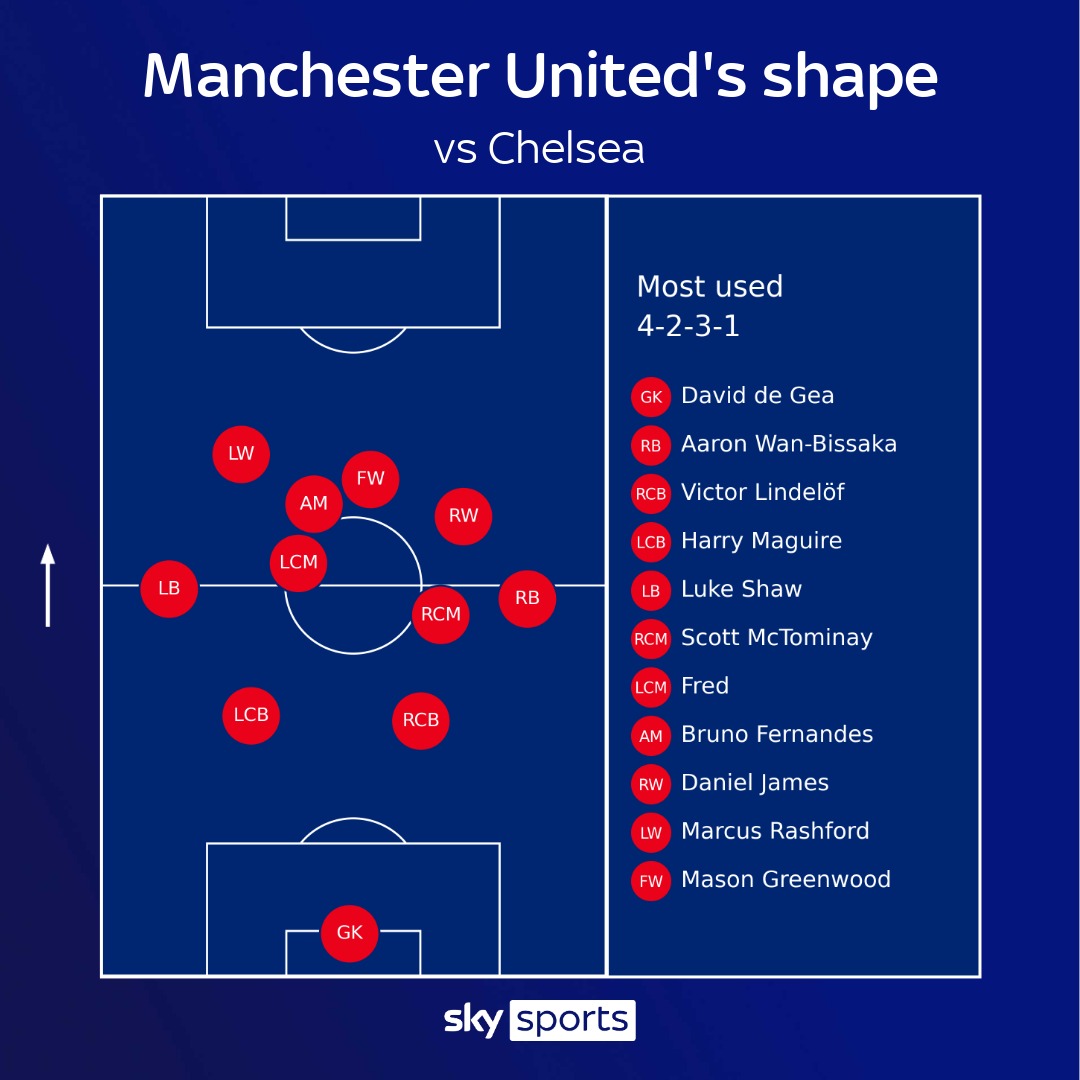 Having to withstand some pressure during the latter stages of the game, and with Giroud substituted, United did eventually revert to a deeper defensive line.

There was some good defending in that period too - notably when Lindelof put the ball behind from Reece James' right-wing cross as Werner lurked near the far post.

But United retained that threat on the counter-attack. Even in the last minute of normal time, Scott McTominay had the chance to thread a pass through to his team-mates, only to deliver the ball just behind them.

He was not alone in his wastefulness. Fernandes should have done better than kick the ball out of play when Marcus Rashford was free to his left.

Fernandes was below his best throughout. No player on the pitch lost possession more times - 20 - and though that is largely due to his ambitious use of the ball, taking responsibility to conjure something for his side, it does not fully explain his showing. Fourteen of the other players on the pitch managed to create at least as many chances as he did. It just did not happen for him.

Fernandes has clearly been a revelation since arriving and is already well established among the very best players in the Premier League. But supporters of rival teams are beginning to gleefully seize upon his under-par record in the biggest games. He is yet to score a Premier League goal against Manchester City, Liverpool, or Chelsea.

In fact, he has only two goals against big-six opposition, both against Tottenham, and, on average, is having to wait over 200 minutes for each goal involvement in those matches compared to one every 70 minutes against the rest of the Premier League.

Is it a concern? Perhaps not. He did score a fine free-kick against Liverpool in the FA Cup and might well have ended up the hero here had the penalty been awarded for Callum Hudson-Odoi's handball.

Fernandes is such a competitor that it seems unlikely to be a mindset problem. It is more likely that United need to be more positive if they are to get the best from him in these matches.

Despite the all too familiar outcome, they did that for periods against Chelsea and the next opportunity in a big game is not far away. Manchester United face Manchester City next weekend.