West Brom's Mbaye Diagne controversially denied goal by VAR in match vs Southampton - but why?

VAR in the spotlight again as West Brom's Mbaye Diagne has opening goal against Southampton ruled out in controversial incident at The Hawthorns; VAR said it couldn't detect enough evidence to overturn decision, despite Diagne being onside; West Brom ended up beating Southampton 3-0 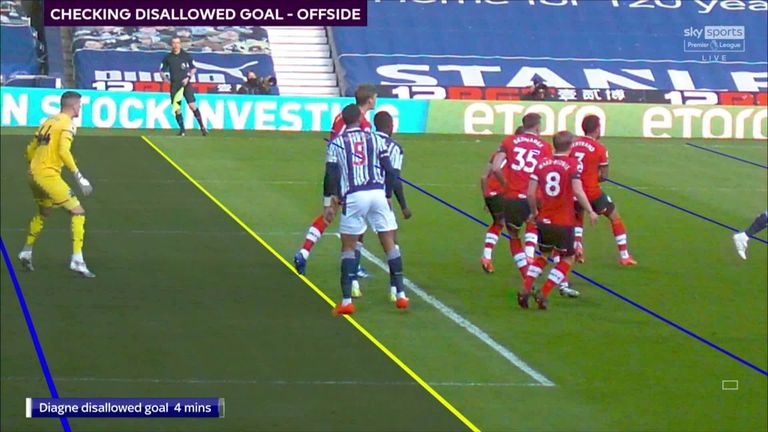 Was West Brom's ruled-out first 'goal' against Southampton the most confusing VAR decision of the season so far?

The Baggies were denied an opening goal in controversial circumstances against Southampton by another apparent high-profile error from VAR.

And while 'controversial' and 'VAR' have been regular companions this season, this Monday's incident, broadcast live on Sky Sports, was one of the strangest yet.

Mbaye Diagne, standing in close proximity to team-mate Kyle Bartley, looked to have boosted the Baggies' survival hopes when he nodded them ahead inside four minutes at The Hawthorns, only for the effort to be ruled out on the field for offside.

The decision was checked by VAR and the offside call was upheld, despite Diagne appearing to be kept onside by Saints defender Jannik Vestergaard.

There was immediate bafflement from the Sky Sports commentary team, with Don Goodman telling viewers: "Once l saw the pictures, I thought he was onside.

"The lines say differently... but it is Kyle Bartley who is offside. I wonder if they have got this right? Kyle Bartley had nothing to do with the goal"

So why was the goal disallowed?

Sky Sports has been told by VAR's match centre that Bartley blocked the camera view, meaning VAR was unable to conclusively prove the striker was onside, and was therefore unable to overturn the decision.

As explained at half-time by Sky Sports presenter Dave Jones: "Obviously it was given offside on-field. Then it went to VAR.

"They say that Bartley was blocking the line-cam view of Diagne and because they cannot draw a definitive line, they have to stick with the on-field decision." 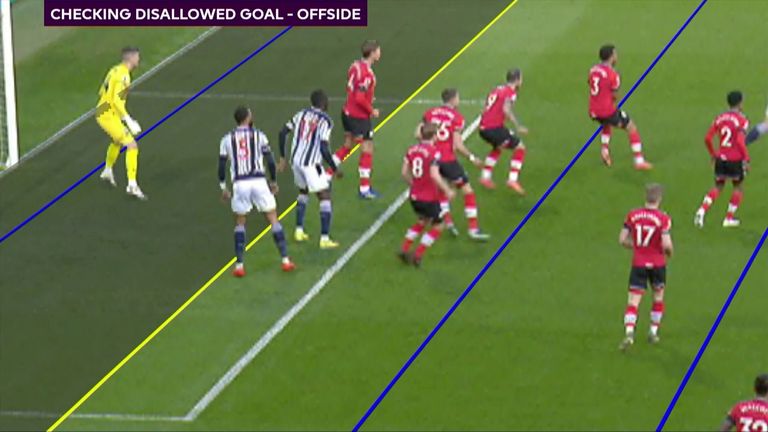 Former Premier League referee Dermot Gallagher: "There are lots of things we could say in hindsight. You could say which way is (Mbaye) Diagne angled? You can see the different coloured boots, there is a good example, but when you look at the frame, it is not at a straight angle.

"You can go back to the Aston Villa - Sheffield United game [when Michael Oliver's watch failed to signal a goal for the Blades] which was a very unusual occurrence but in this one, they couldn't find that definitive angle.

"When I looked last night at the technology, we couldn't see on our screens any angle that saw the shoulder of Diagne and the boot of (Jan) Bednarek in the same clip.

"On that basis, the VAR just said I cannot make that decision accurately. The only other way [in that case] is to default back to the onfield decision. 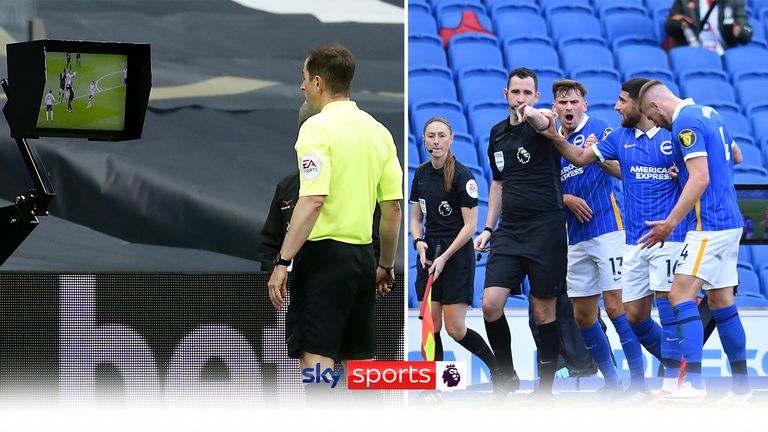 A look at some of the most controversial decisions made by VAR this season.

What did the Sky Sports pundits say?

Kevin Campbell on Monday Night Football: "I have had enough of VAR and how it is officiated. That was a perfectly good goal. The fact that West Brom have scored two goals has got the linesman and the VAR official out of jail. For me, it is a disgrace."

Sky Sports' Jamie Carragher: "This is a situation VAR is made for. Diagne is onside, I have no doubt whatsoever. I know it's a tight call, but if you look at his feet, yes it's onside. 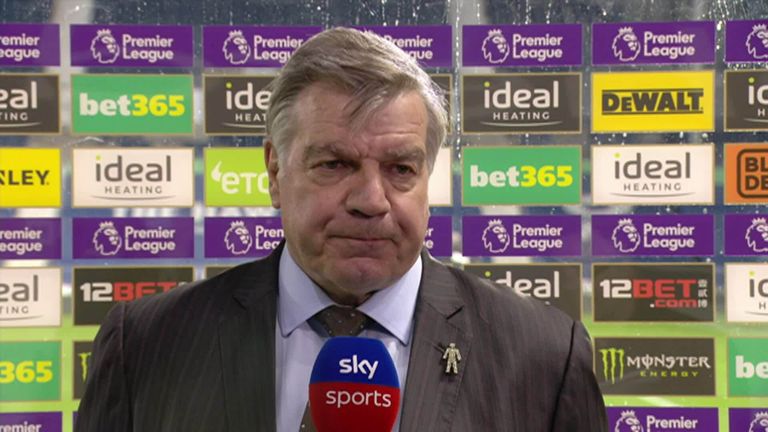 West Brom manager Sam Allardyce: "Obviously the big disappointment is the first goal we scored that looked like a goal, that wasn't a goal, that should have been a goal because I've seen all the lines and angles on that and as far as the situation goes, I think they got that wrong.

"Gladly for us, it hasn't affected the result we deserved but it easily could have done. We've overcome that decision and got the three points we thoroughly deserved.

"If you could have seen me in the studio, you would've seen me jumping up and down... We have it on our iPads and then we had another look at half-time, but gladly, it hasn't cost us anything today in terms of points.

"But that's immaterial now, it's come and gone. We can only hope that when it does come up next time, the goal is given. We had one here against Everton at 1-1 and it was a toenail, and that would have been another precious point."

Did VAR fail you?

"Absolutely massively. The problem is, the big man [Diaye] is so disappointed that he's not got another goal - he's a goalscorer and when they score, they're happy and the confidence goes up. When they get them taken away, which they don't deserve to be, it can affect them. 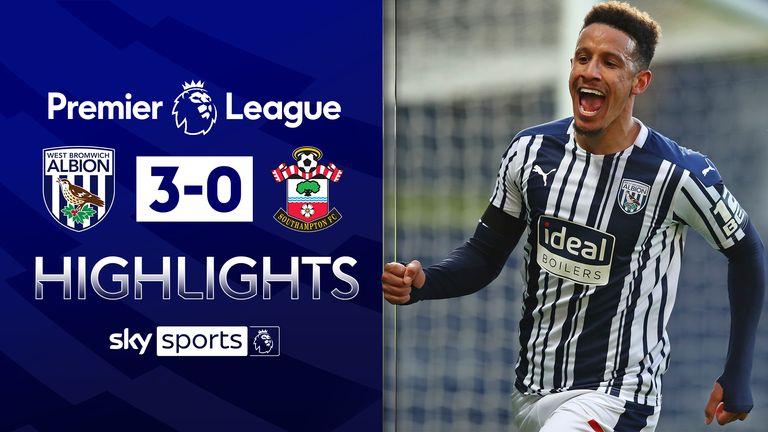 FREE TO WATCH: Highlights from West Brom's win against Southampton in the Premier League

"We saw his delight when he scored against Chelsea and he should have been allowed again tonight. Then his brilliant assist for our second goal would have made the perfect night for him, but because he's been deprived of that goal, he's pretty miserable in the dressing room.

"They got it wrong because of human error.

"The reflection on VAR can be done at the end of the season and all stakeholders should have an influential input into how VAR goes forward and I think that input needs to be from the PFA, the LMA, the Premier League, and the FA. We need to come together on this because there's too many of us not being given the opportunity to express how to make it better and I think that needs to be done in the hope that we can get a better balance from what we're seeing week in, week out, and to help us more than it has actually helped us."

Southampton manager Ralph Hasenhuttl: "Normally the offside decisions are the easiest ones, there's a clear yes or no. You can discuss the thickness of the lines, I think they had a problem with the line because two players were standing in line, maybe there aren't enough cameras to see. I think this is a technical problem that is normally easy to solve."