Sam Allardyce's Baggies had stunned Chelsea last Saturday, winning 5-2 at Stamford Bridge, and instantly picked up where they had left off in an impressive first-half display.

They did have the ball in the back of the net inside four minutes, but Mbaye Diagne's glancing header was ruled out for offside by the linesman. VAR checked it though and despite replays appearing to show the striker was onside, the goal remained disallowed, once again throwing VAR into the spotlight.

But if anything, it seemed to further galvanise West Brom, and they deservedly went ahead when Matheus Pereira (32) scored from the penalty spot, having been fouled in a moment of madness by Southampton goalkeeper Fraser Forster.

Although his goal may have been chalked off, Diagne did pick up an assist for his evening's work when his cross was turned home by Matt Phillips (35), before Callum Robinson (69) followed up his two goals against Chelsea with West Brom's third.

His 1st PL goal not against Chelsea pic.twitter.com/O7rroNFGaJ

Although Southampton dominated possession after the break, they did not create many clear-cut chances, registering just four shots on target. James Ward-Prowse saw a late penalty stunningly saved by Sam Johnstone as the Saints suffered a hit to their confidence ahead of Sunday's FA Cup semi-final against Leicester at Wembley.

But West Brom have given their hopes of Premier League survival another massive boost, now eight points from safety with seven games to play. 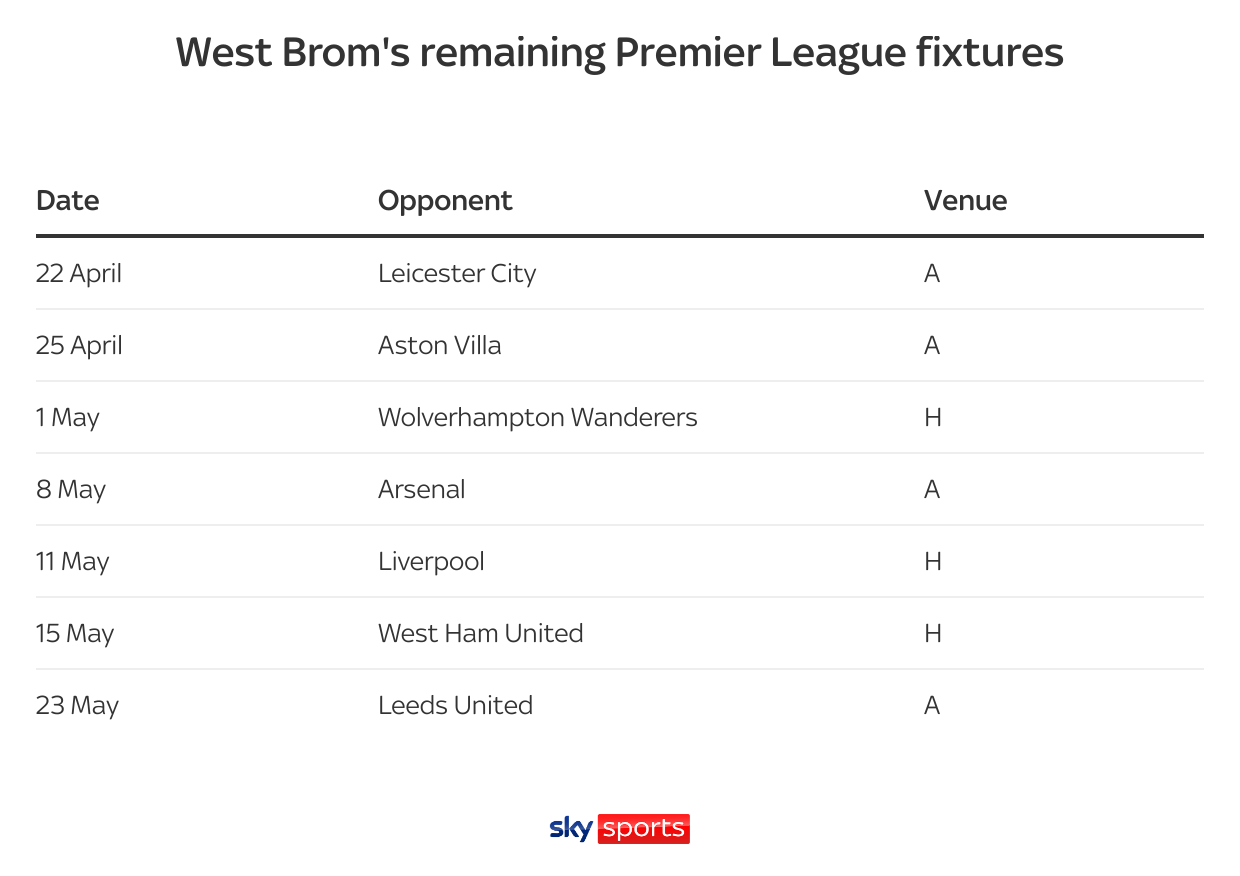 After a miserable weekend for VAR, the technology was once again under scrutiny inside four minutes. Diagne had glanced home from Pereira's fizzing attempt, but the offside flag was raised. VAR stepped in, but the goal remained chalked off, despite Diagne appearing to be onside during replays.

West Brom dominated the first half and continued to see chances fall their way - registering 13 shots in the first half - with Diagne going close just before the half-hour mark. After some superb passing play from the Baggies, Pereira slotted the ball through for him, but his eventual effort flew wide. Soon after, Stuart Armstrong had the best chance of the half for Southampton, forcing a leaping save from Sam Johnstone with a powerful long-range effort.

Man of the match: Ainsley Maitland-Niles.

West Brom finally went ahead from the penalty spot in the 31st minute. A rash moment from Forster saw him swipe at the legs of Pereira for a stonewall penalty. The West Brom forward lined it up on the spot and fired down the middle, deservedly putting the hosts ahead.

The Baggies doubled their lead four minutes later with some more superb team play. Diagne drove down the left wing with an acre of space ahead of him, before slotting the ball to the back post for the incoming Phillips. It was then a simple slot home for the midfielder as West Brom rounded off a stunning first-half performance.

There was a change of tack for West Brom in the second half, switching to a more defensive mentality. Southampton dominated the ball - registering 80.1 per cent possession after half-time - but despite some good play, they did not create too many chances. Their first real sight of goal after the break did not come until after the hour when once again, Armstrong stung the palms of Johnstone from range.

But West Brom's aim of scoring on the break came off perfectly when Robinson added their third in the 69th minute. The Baggies did well to win the ball back in midfield, with Okay Yokuslu sending a low pass through for Robinson. The forward was in between the two defenders, before sending a lovely finish into the far corner for his fifth Premier League goal of the season.

Southampton did not offer much by way of a reply, but did have the chance for a consolation in added time when Moussa Djenepo was fouled by Conor Townsend in the box. Saints captain Ward-Prowse stepped up, but his powerful penalty was saved by a leaping Johnstone to compound a dismal evening for Southampton.

Man of the match - Ainsley Maitland-Niles

🍾Ainsley Maitland-Niles - Man of the Match🍾

It was a superb performance from the Arsenal loanee. He did not give Southampton a moment of rest and was one of the key driving forces behind West Brom's victory.

Sky Sports co-commentator Don Goodman said: "With and without the ball, he has covered every blade of grass. He's stretched that Southampton defence by making runs in behind and then he has got back, made tackles, kept the ball and ticked every box for me."

West Brom manager Sam Allardyce: "The first half was absolutely right up there with anything and everything we did at Chelsea, apart from we didn't finish quite as clinically, which meant that if we had, we probably would have been four or five up before they had a sniff in the second half.

"Obviously the big disappointment is the first goal we scored that looked like a goal, that wasn't a goal, that should have been a goal because I've seen all the lines and angles on that and as far as the situation goes, I think they got that wrong.

"Gladly for us, it hasn't affected the result we deserved but it easily could have done. We've overcome that decision and got the three points we thoroughly deserved.

"Southampton were bound to get back into the game at some point, but then the resilience and the defending qualities which have been with us for eight, nine, ten games were there again. Then you do what you've got to do to finish a team off and that's when you have a chance, you put it away and we did that.

"It's a clinical performance in the first half and then finishing them off with the third goal. A brilliant save from Sam for the penalty which gave us the clean sheet and I'm very satisfied with how the players played today.

"If you could have seen me in the studio, you would've seen me jumping up and down… We have it on our iPads and then we had another look at half-time, but gladly, it hasn't cost us anything today in terms of points.

"But that's immaterial now, it's come and gone. We can only hope that when it does come up next time, the goal is given. We had one here against Everton at 1-1 and it was a toenail, and that would have been another precious point.

"But the game today is what we're really focused on. The players have won back-to-back games this season, we've been a really good team for nine, ten, 11 games now. Unfortunately it has been our fault for missing chances and not getting more points on the board and not having a better chance of survival. But we keep going and if we keep on like this, we've got to try and beat Leicester next time round."

Southampton manager Ralph Hasenhuttl: "In the first half, everything [went wrong]. In the second half, the way we conceded the third goal… It was a killer for the game and then it was gone.

"We made a few [tactical] changes at half-time and they worked better but it is not always possible to turn a game when you're 2-0 down. In the first half, we have been too far away from our opponents and dropping so quick, and I'm not sure why we do this sometimes because it's not necessary.

"We had a big problem with second balls. We nearly lost every second ball and it's not possible against a team who come with long balls and going for the second balls. It was tough and in the second half, we changed this, we defended higher and more compact, then we immediately had more pressure on the opponent but in this time, you must make a goal and you have maybe a chance to come back like we did last week, but it's not always possible.

"In the end, everything, even then not scoring the penalty, fits with the game and it was definitely a very bad performance.

"One thing is clear - when we play like this, we do not have a minimum chance on Sunday. If they think they can rest today for Sunday, I think that's not the right way to do it. We will have a very critical analysis of this game because it's important, I think."

Sky Sports' Jamie Carragher: "I just think a few teams may start getting a little nervous after thinking that both Sheffield United and West Brom were down. I think Sheffield United are. West Brom have got a lot to do, we know that, but if you are Newcastle, Burnley, maybe Brighton going into this game tonight, it is what they call squeaky-bum time." 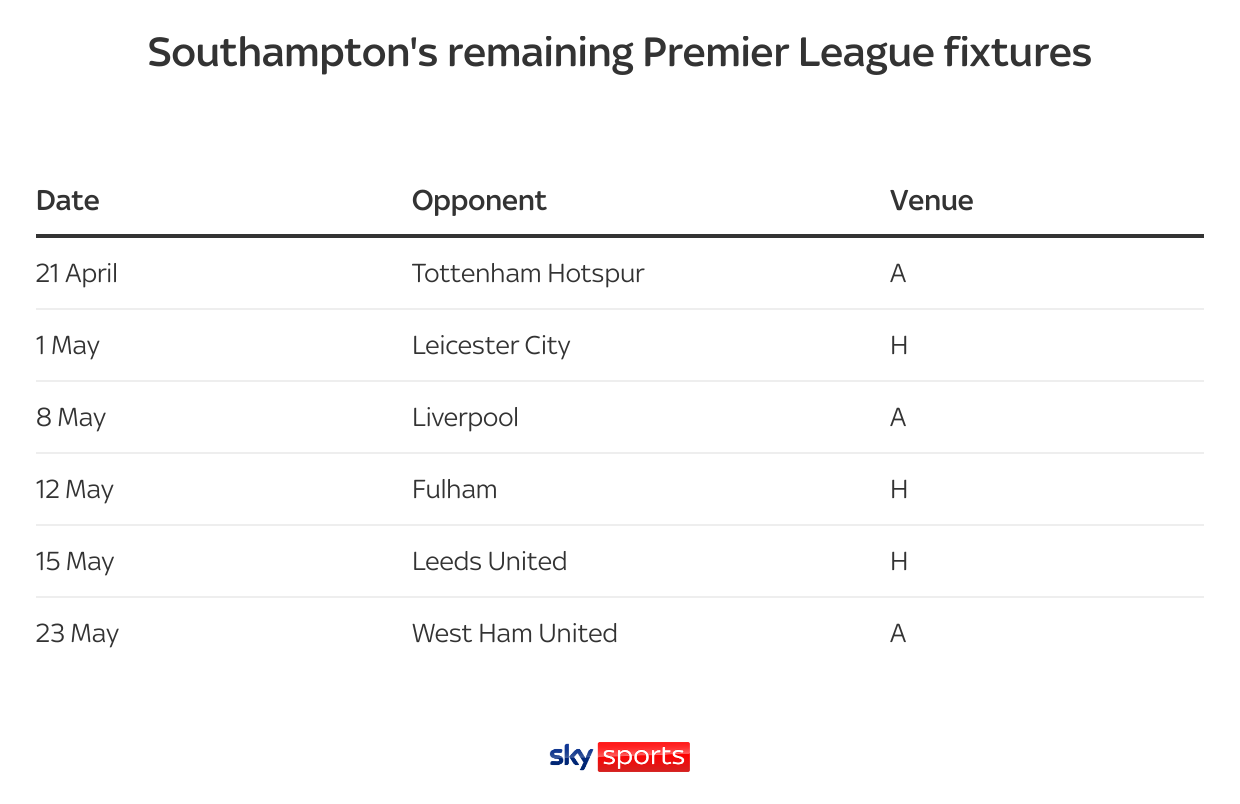 Monday Night Football guest Kevin Campbell: "If they perform like this every week, they're going to be there or thereabouts [for Premier League survival], asking other teams questions to get results. I thought Maitland-Niles was excellent, Pereria was excellent, and they asked that many questions of Southampton that they couldn't answer. A really good win.

"It's what West Brom deserve - they deserve to win by three clear goals minimum. Really impressed with West Brom today."

Southampton will play their biggest game of the season so far on Sunday when they also face Leicester in the FA Cup semi-final at Wembley; kick-off 6.30pm. They will then travel to Tottenham in the Premier League on Wednesday 21 April, live on Sky Sports; kick-off 6pm.