Jamie Vardy has bought a minority stake in Rochester Rhinos but has no plans to retire from playing; the Rhinos have not had a competitive team for four years but with Vardy's involvement, the club plans to field a team again in 2022 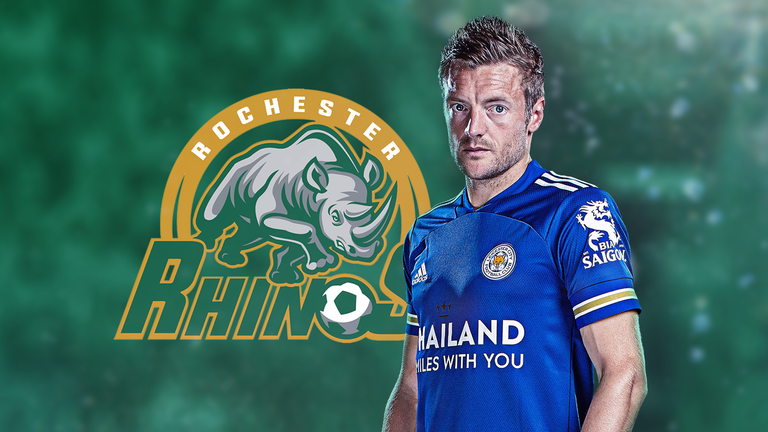 Former England international Vardy has bought a minority stake in the New York state-based side but has no plans to retire from playing.

Rochester, formed in 1996, have not competed at any level for four years, but they have won the national championships four times and are the only non-MLS team to have won the US Open Cup.

With Vardy involved, they plan to field a team again in 2022.

The Dworkin family who have owned the Rhinos since 2016 have been in negotiations with Vardy and his representatives for more than two years.

A big part of Vardy's plan is to try to recreate some of the success he managed with his "V9 Academy" in England, which gave a second chance to non-League players who Vardy felt were good enough to play in professional football.

Rochester has now signed a partnership with the highly respected Empire United Soccer Academy, which will operate in tandem with the Rhinos to provide a pathway to the first team for elite local players.

Leicester have given Vardy permission to pursue this opportunity while he still focuses on playing.

"I'm really excited to be part of the Rhinos," Vardy said. "I've been looking at opportunities in the United States for a while, but there was something about Rochester and the Rhinos that just felt right.

"I love the story of the US Open Cup win, and although the club has been through some difficult years since, in a way that makes this more appealing to me.

"Once I started speaking to David and Wendy (Dworkin) - and we've had so many conversations via video calls - I could see how enthusiastic they are about the Rhinos, and I knew that I wanted to get involved and try to play a part in helping to turn things around.

"It won't be easy, but I never do anything the easy way in life!"

"This is a huge coup for Rochester and the Rhinos," David Dworkin said.

"Jamie Vardy is known throughout the soccer world because of his success and his inspirational story, and we are delighted that he has chosen to join us as a co-owner.

"Aside from the experience, knowledge, and profile that Jamie will bring to our club, one of the things that has really shone through during our discussions with him is how incredibly passionate he is about this project.

"Jamie absolutely shares our desire to give Rochester a successful soccer team again."