Premier League clubs can snap up some of Europe's biggest stars and brightest prospects for free when their contracts expire on Thursday.

With the help of Transfermarkt, we scoured the world for free agents and whittled that list down into a starting XI.

Gianluigi Donnarumma has been plying his trade as the No 1 stopper at AC Milan for five seasons, but is still only 22 years old and will be available for free on Thursday - with Paris Saint-Germain set to swoop for his signature.

If he has the longevity of compatriot Gianluigi Buffon - who returned to Parma at the age of 43 after his deal at Juventus expired - the Italy international could have another 20 years or more in top-flight football, which bodes well in market value for potential suitors. 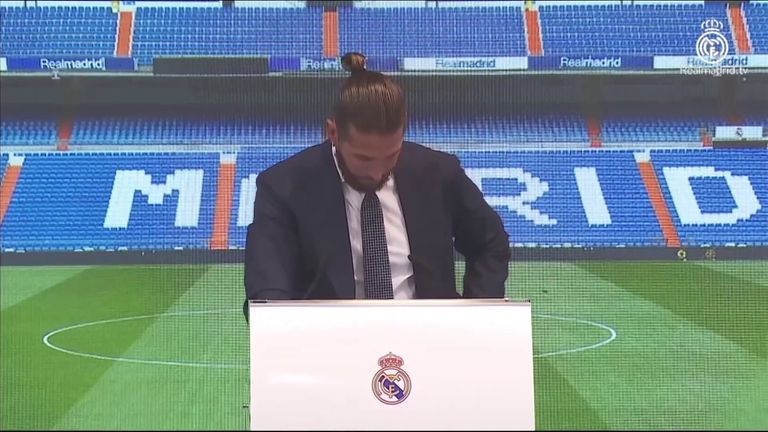 Sergio Ramos breaks down in tears during an emotional farewell, following the confirmation he will leave Real Madrid after 16 years at the Spanish giants.

Sergio Ramos bade an emotional farewell a fortnight ago and will leave Real Madrid in July after 16 years at the club. At 35, the former Spain skipper should have a season or more of top-flight football left in his locker.

Bayern Munich released another centre-back superstar in Jerome Boateng, who missed out on the Germany squad for Euro 2020. The 32-year-old has been linked with Monaco, Roma and Tottenham.

In terms of longevity, there is some serious value available in the full-back positions, with Napoli right-back Elseid Hysaj and Ezgjan Alioski among a host of options up for grabs this summer.

Hysaj turned 27 earlier this year and has racked up 179 appearances for Napoli in Serie A since 2015, along with 59 international caps for Albania over the past eight years.

Meanwhile, Alioski was North Macedonia's headline act at Euro 2020 and produced typical displays of tireless energy and forward endeavour, which were hallmarks of the 29-year-old's game under Marcelo Bielsa at Leeds.

Juan Mata (33) is officially out of contract at midnight on Wednesday but has reportedly expressed the desire to stay at Manchester United for another season.

Meanwhile, John Lundstram (27) shone for Sheffield United during their stellar top-flight campaign in 2019/20 but clocked fewer minutes during the Blades' tumultuous campaign last term, which saw them return to the Championship.

Jeffrey Schlupp is among a raft of Crystal Palace players with contracts set to expire, but the former Leicester man is the only one to make our XI - based on his frequent explosive performances and still being only 28 years old.

Arguably the greatest player on the planet could be snapped up for free this week: Lionel Messi. The 34-year-old's transfer request was rejected by Barcelona last summer but his contract situation is never far from the headlines.

There is a wealth of free talent available, but we've taken a punt with former Manchester City striker Stevan Jovetic (31) - despite recent injury concerns - and Josh King (29), who largely watched from the sidelines during a spell at Everton last season following several successful campaigns with Bournemouth.