Steven Gerrard on Danny Ings' strike, which was disallowed by VAR after a wait of 3mins 32sec: "How long have you got? The officials took three and a half minutes to settle that one. They have looked at two or three things in it."

Steven Gerrard highlighted the time taken for the VAR check that disallowed Danny Ings' strike in Aston Villa's FA Cup exit at Manchester United, but refused to blame it for the defeat.

It took more than three and a half minutes for VAR Darren England and on-field referee Michael Oliver to decide Jacob Ramsey's block on Edinson Cavani in the build-up to Ings' finish had been both offside and interfering with play, raising questions over the "clear-and-obvious" threshold needed for the video official to overturn a decision.

With the goal disallowed, Villa fell to a narrow defeat through Scott McTominay's early header, leaving them out of the FA Cup in Gerrard's first match in the competition as a manager.

When asked about the decision, he told BBC Sport: "How long have you got? The officials took three and a half minutes to settle that one. They have looked at two or three things in it.

"When VAR is there and they make a decision you have to accept it. There is nothing you can do to change it. The easy way out is to blame luck and the officials, we won't do that.

"It's very tough. We are out of the FA Cup and coming into this job I saw this competition as an opportunity to have a good run in it.

"We dominated for large parts but we were not ruthless enough.

"I've seen enough tonight in terms of the performance to know that I can get to where I want to get to but we need to learn and learn quickly. We need to be more ruthless moving forward, defending crosses we need to be tighter.

"We cannot be having people with free headers in our six yard box. It is quite clear what we need to iron out and we will do it in the short term."

Timeline: Why did Ings' goal take more than three minutes to overturn? 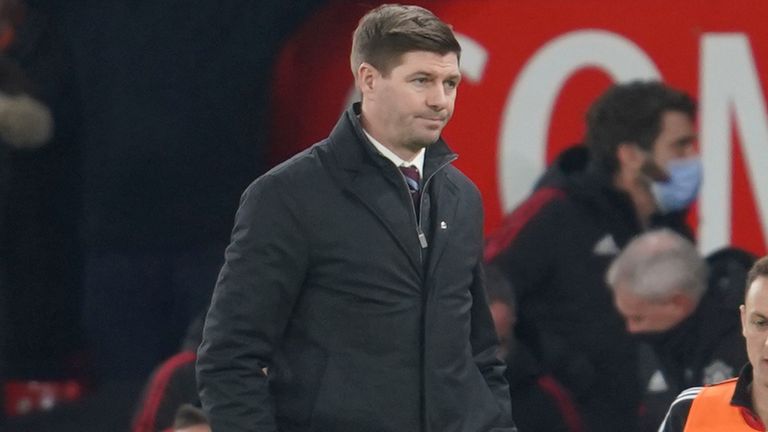 Former Premier League referee Dermot Gallagher explains process and the decision behind the VAR decision to disallow Aston Villa's goal against Manchester United in the 3rd round of the FA Cup.

"It's very, very rare you see a VAR send the referee to the monitor for an offside decision. It can only happen if it is a subjective decision and not a factual decision. On this basis, Darren England sent Michael Oliver, explained why he had sent him, Oliver looked at it, felt that Cavani had been impacted by Ramsey and disallowed the goal.

"It took three and a half minutes - a long, long time as there were a lot of things to look at - and, in the end, the law does say 'does he impact on an opponent?'. It comes down to the referee's judgement.

"Being in an offside position is not an offence in itself - you have to touch the ball or impact on an opponent, and the second part is the key element of it. I think that's why it took so long. They checked three different elements of why the goal should be given or disallowed and, in the end, they felt that the third element - the Ramsey impact - was a key issue.

"It hasn't taken three and a half minutes to get to that conclusion. What it has taken is three minutes is to go through all three parts. It took a long time to check whether Watkins had struck the ball. You see that run and run and run, which has eaten up a lot of time. It has taken time to check whether Danny Ings has handled the ball and then, what I would say is that when you look at the third part, it was the part that was better used in the time, it was quicker to do that."

Ralf Rangnick felt his United side reacted positively from defeat to Wolves in their last game, and was pleased with the way they saw out victory after a number of near-misses from Villa earlier in the game.

"I think we showed a reaction after the Wolves game, that is what everyone expected from us," he told BBC Sport.

"We knew it would be very difficult against Villa. In the first half, I thought we did well. It could have been 3-2 or 4-3 to us at half-time.

"In the second half, we were on the counter-attack and we could have made more of those situations. We took the wrong decisions at times but when we changed to a diamond in midfield we had more control.

"In the last 20 minutes, we had more control. We fought well as a team together when it was important. In the end, it was a good win. That was our goal, to proceed to the next round."

The German re-iterated his priority towards keeping clean sheets as United registered their third shut-out since his arrival, and heaped praise on David De Gea who kept out a number of presentable Villa opportunities in either half.

He said: "We have to develop the team into a clean sheet team and that was another one today but still David de Gea was outstanding again for me today.

"I would have wanted him to have less saves in total, I think we had four or five shots on goal but again we can still improve even in that area."

Rangnick is unsure why Marcus Rashford is struggling to make an impact after the forward toiled against Villa.

The England international was guilty of some poor decision-making during the match and some met his substitution with sarcastic cheers.

Asked why the academy graduate was underperforming, interim manager Rangnick said: "Actually I don't know. I think he's trying hard. In training he was doing well in the last couple of days, that's why he was quite rightly in the starting XI.

"I think in the first half we found him quite often, but we also tried to get him into the box. In the second half that was not that often the case and that's why at the end of the game I decided to make two changes with Anthony Elanga and Jesse Lingard.

"It was very important to progress into the next round. Yes [confidence is important] especially for strikers - it's important that they score goals on and off, that there are moments of success.

"It was job done for Manchester United, but only just!

"Steven Gerrard will be left scratching his head on the bus home from Old Trafford, wondering how his side didn't get something from this entertaining FA Cup tie.

"Villa were by far the better side as they passed their way through Manchester United time and time again, just as Wolves did in their win at Old Trafford in the Premier League a week ago as Ralf Rangnick's side's failings of the last few weeks appeared again.

"McTominay and Fred may have combined for what proved to be United's winning goal in the opening stages, but time after time United were overrun in the middle of the park as Villa piled the pressure on the hosts.

"The frustrations of the home fans were evident as passes went astray and Villa continued to dominate the game, and on a different day, Gerrard's men would have got their reward.

"However, it was to be United's day as they held on for a much-needed win to ease the pressure slightly on Rangnick."