A mix-up involving Bayern Munich substitutes that saw the champions play with 12 men for a few seconds late in Saturday's 4-1 win over Freiburg was down to a wrong number displayed on the board, according to Bayern coach Julian Nagelsmann.

The incident came in the 86th minute when Corentin Tolisso and Kingsley Coman were to be taken off for Marcel Sabitzer and Niklas Suele.

But the fourth official displayed a wrong number for Coman and the France winger played on for a few seconds, according to the champions and referee Christian Dingert.

"The fourth official showed the wrong number," Nagelsmann told a news conference. "King (Coman) did not know he had to come off. It was eight or nine seconds I think that we played like that. It was not a game-deciding incident but still a bit weird. 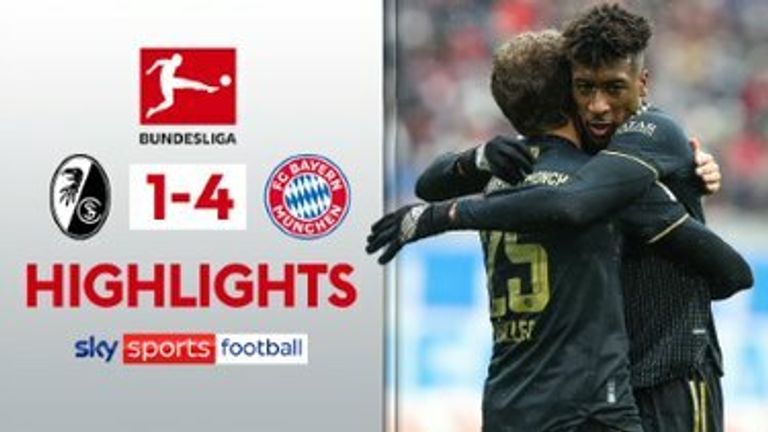 Highlights of the Bundesliga match between SC Freiburg and Bayern Munich.

"It is normal for fans to be discussing it. I know who is to blame but I will not name them and do you this favour. I am happy we won."

Freiburg coach Christian Streich said his team was not planning to appeal: "I expect that we will not have to appeal anything. We abide by these rules and that is all I will say about it."

It was unclear if there would be any consequences for the Bavarians, with referee Dingert saying he had noted the incident in the match report.

"The wrong number was shown so the player Coman did not feel it was referring him. While clearing up the situation between team and the official it was neglected to take the player off. That is very annoying," Dingert said.

"We interrupted the game. It took a bit longer to clear it up. That is why we had eight minutes of stoppage time. We have noted that in the match report that this is what occurred.

"In the 16 seconds (Coman played on) not much happened and it is now up to the colleagues at the German Football Association."

Bayern had to work for their win after Leon Goretzka's 58th minute opener was swiftly cancelled out by Freiburg's Nils Petersen.

Later goals from Serge Gnabry, Kingsley Coman and Marcel Sabitzer tightened their grip on the title race as their close rivals were embarrassed on home turf.

Bayern's win put them nine points clear at the top of the table with six matches left.

RB Leipzig's Konrad Laimer scored twice and set up a third goal for a stunning 4-1 victory at second-placed Borussia Dortmund that all but killed off the hosts' slim title hopes.

Leipzig, who tightened their hold on fourth place on 48 points, struck against the run of play when Laimer chipped the ball over keeper Gregor Kobel in the 21st minute to shock the first sold-out crowd in the Signal Iduna Park in more than two years. 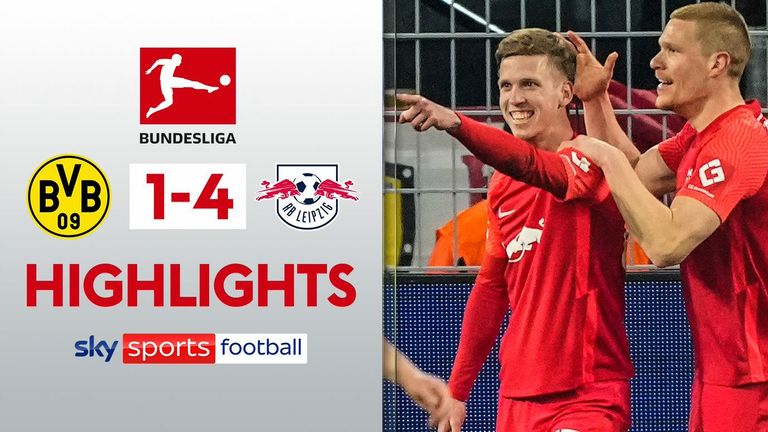 Highlights of the Bundesliga match between Borussia Dortmund and RB Leipzig.

What was to be a big football party for the hosts, with top striker Erling Haaland in the starting line-up and in front of 81,000 fans, turned into a nightmare when Austria international Laimer added a second with a deflected shot 10 minutes later.

Frustrated Dortmund, who had a couple of golden chances early in the first half with Marco Reus and Haaland, could not find a response after the break. Haaland, who had suffered an ankle injury earlier in the week while on international duty with Norway, was far from his best.

Leipzig killed off the game when Christopher Nkunku, set up by a Laimer backheel, completed a superb attack to make it 3-0 in the 58th.

Substitute Donyell Malen managed to briefly cut the deficit in the 84th with a header at the far post but Leipzig responded two minutes later with Dani Olmo's well-placed shot from outside the box to seal an emphatic victory.

Two out of three ain't bad for Benzema from the spot

Karim Benzema scored two penalties and missed another as Real Madrid soared 12 points clear in La Liga with a 2-1 win at Celta Vigo.

Benzema netted his opening spot-kick in the 19th minute before Nolito equalised for the hosts early in the second half.

The French international saw his next opportunity saved in the 64th minute but made no mistake with his third chance five minutes later as Real softened the memory of their 4-0 home humiliation by Barcelona last month.

Jose Luis Morales scored twice in the second half as struggling Levante boosted their survival hopes with a 2-0 win over Villarreal, while Borja Mayoral scored a late winner to see Getafe past Mallorca.

Atletico Madrid leapfrogged Barca into third place in the table after easing to a 4-1 home win over Alaves.

An early strike from Joao Felix was cancelled out by Gonzalo Escalante on the hour, but a late brace from Luis Suarez, sandwiching a second from Felix, saw Diego Simeone's side home.

Sarri's Lazio get back to winning ways

In Serie A, Maurizio Sarri's Lazio bounced back from their defeat in the Rome derby two weeks ago as they beat Sassuolo 2-1 at the Stadio Olimpico.

Manuel Lazzaro scored an early opener and Sergej Milinkovic-Savic added his side's second early in the second half before Hamed Traore struck an injury time consolation.

Also in Serie A, Emanuel Gyasi scored the only goal deep into injury time to claim three valuable points for Spezia and strike a further blow to second-bottom Venezia's survival prospects.

In Ligue 1, Martin Terrier grabbed a 78th minute equaliser for second-placed Rennes in a 1-1 draw at Nice, while Lille were held to a frustrating goalless draw by bottom club Bordeaux.

The match between St Etienne and Marseille was postponed after heavy snowfall made access to the Stade Geoffroy-Guichard unsafe.