Vivianne Miedema's early second-half strike gave the Gunners a 1-0 victory in the Netherlands after they were held to a 2-2 draw in the first leg; The Champions League group stage draw will be made on October 3 with matches starting from October 19

Arsenal Women have qualified for the Champions League group stage following a 3-2 aggregate victory over Ajax, but had to overcome a series of bizarre circumstances to book their place in this season's competition.

Arsenal manager Jonas Eidevall attempted to employ the use of a concussion substitute after Beth Mead was forced off with a head injury in the second period but was denied, while there were discrepancies over the height of the goalposts before the game had even kicked off.

"Playing against a big club like Ajax, where we had to measure the goals before the start of the game...I have never experienced anything like it to be honest," a bemused Eidevall remarked in the aftermath of the win, which was secured by Vivianne Miedema.

The Dutch international's early second-half strike gave the Gunners a 1-0 victory in her native Netherlands after they were held to a 2-2 draw in the first leg. The Champions League group stage draw will be made on October 3 with matches starting from October 19.

Arsenal put in an accomplished display in stormy conditions in the Dutch capital and could have led in the opening 20 minutes but Stina Blackstenius shot straight at the Ajax goalkeeper.

Miedema showed her class and settled any nerves six minutes into the second half as she struck home in style, finding the corner from 20 yards after a dynamic drive towards goal.

The Dutchwoman could have added a second soon after but her shot was well saved by Lize Kop.

The Gunners had a scare in the final 20 minutes when Tiny Hoekstra stabbed wide from close range after good work by Nadine Noordam. But Eidevall's side survived and put their name in the hat for Monday's group stage draw. 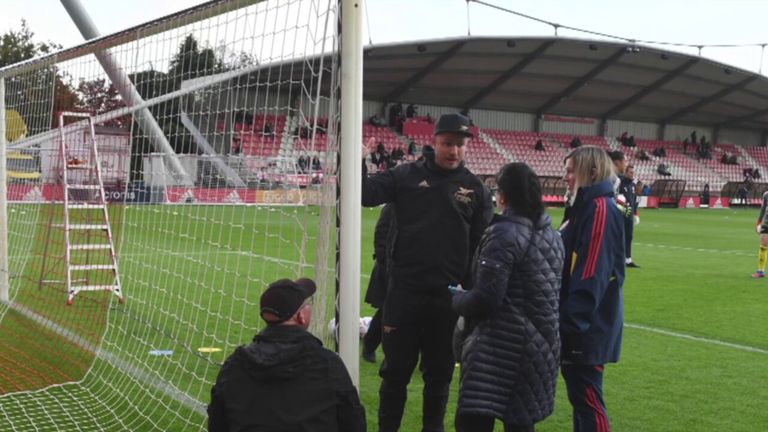 "It's been a very weird experience being here. I think UEFA removed the concussion sub, they still have the concussion protocol which means the doctor takes the decision. There's no doubt that Beth [Mead] needs to be taken off.

"The problem that I have is that I asked the fourth official if we can do a concussion sub and she said yes, and that's why we are preparing Lina, and then when we are going to do it she says no.

"We had that break for two, three minutes and we could have spent a lot of that time speaking to the players on how we would have defended with 10. So I think that's misinformation from the referee. I honestly don't know how and why that can be, because for me it's just such a simple question to answer yes or no.

"In Sweden - where I come from - in ice hockey it's very big. If you tackle towards the head they've realised how dangerous that is, they are so harsh on penalising violence towards the head.

"If that's not a red card to go towards a head like that - I know she doesn't mean it - but it's careless. And in the end it's carelessness that puts Beth at real risk. I just hope she's all right."

Rangers saw their hopes of reaching the group stage of the Women's Champions League ended with a 2-1 defeat in extra-time to Benfica after teenage substitute Emma Watson had scored a dramatic late goal.

Benfica, defending a 3-2 lead from the first leg at Ibrox, had dominated, but failed to convert numerous chances as Rangers keeper Victoria Esson produced a string of fine saves.

With just three minutes left, 16-year-old Watson slotted in from a corner to send the tie into extra-time.

Cloe Lacasse equalised on the night early on before Lucia Alves was sent off for a second caution and Jessica Silva wrapped things up with another goal for the hosts on the break as Benfica progressed 5-3 on aggregate.

Arsenal, having won both of their opening WSL matches, head to bottom club Reading after the international break on Sunday October 16, kick-off is at 6.45pm and the fixture is live on Sky Sports.