Ange Postecoglou: Celtic do not look out of place in the Champions League

Ange Postecoglou insists performances show Celtic deserve to be in the Champions League; they sit bottom of Group F with one point from four games; Jota remains out for their Scottish Premiership match against Hibs on Saturday 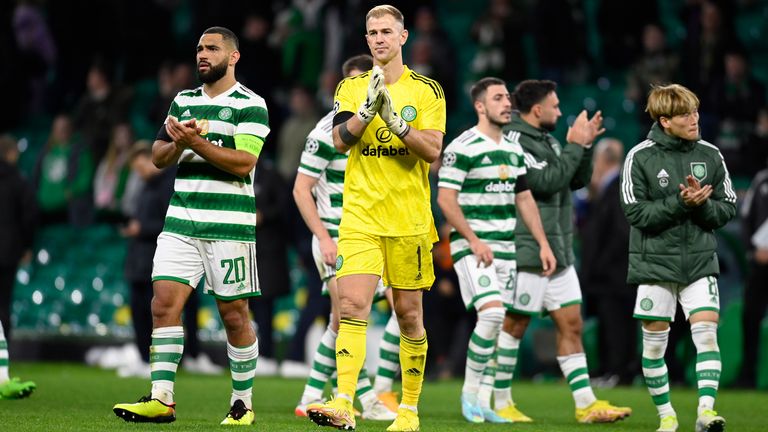 Celtic manager Ange Postecoglou insists only someone with an agenda would suggest the Hoops do not deserve to be in the Champions League.

Celtic manager Ange Postecoglou insists only someone with an agenda would suggest the Hoops do not deserve to be in the Champions League.

Their hopes of progressing in the competition ended on Tuesday night with a 2-0 defeat at home to RB Leipzig, a result that left them bottom of Group F on one point.

They can still qualify for the Europa League knock-out stages if they take at least four points from their remaining two games - at home to Shakhtar Donetsk and away to Real Madrid.

But Postecoglou insists it is unfair to suggest they do not deserve their place in the competition.

"Living here for 18 months I've seen the Scottish national team go from heroes to no hopers no heroes again, so I understand this whole boom/bust cycle that everyone loves to get into here and the whole woe is me," he said.

"If anyone can tell me from the four games we've played that we don't deserve to be there or we've been outplayed or looked out of place, then I reckon they're talking from an agenda or some sort of bias because the only questions I've had after each of our games have been about opportunities missed.

"Opportunities missed suggests to me that we've got to improve some areas, for sure 100 percent, but it doesn't say to me that somehow we should think that we don't belong in a competition that we've earned the right to be in."

Asked if he took encouragement from Maccabi Haifa beating Juventus and Club Brugge topping their Champions League group, he insisted it proved longevity is key.

"Look at those clubs historically, have they always had those results? They haven't," the Australian added.

"So what it means is, the longer you're in this competition the more opportunities you have to grow and make an impact.

"You're not going to go in there for the first time and expect that you're going to dominate the most prestigious club competition in the world.

"At no stage do I believe, or any objective observer would believe, we have looked out of place in this competition."

Celtic will once again be without influential winger Jota when they host Hibernian in the Scottish Premiership on Saturday.

"Jota's not available for tomorrow again. We've just got to be a bit conservative with him and we expect him to be back in training next week at some point," Postecoglou said.

"David Turnbull picked up a bit of a knock on his ankle (against RB Leipzig) so he's out tomorrow and (Stephen) Welsh also picked up a knock in training."