Plus: Aiming for a starting spot at Man City after injuries and what has kept the Australian in the WSL; watch Tottenham vs Man City live on Sky Sports Premier League from 11am on Saturday; kick-off 11.30am

It's an exciting time in women's football. England's success at Euro 2022 has catapulted the game into the public consciousness and the next tournament is not far away - it's just nine months until the Women's World Cup kicks off in Australia and New Zealand.

The Lionesses' home tournament serves as an example of how the profile of the women's game can be boosted, with both host countries surely hoping the same can happen next summer.

Australia's Hayley Raso is in an interesting position too. Playing for Manchester City, she was able to experience Euro 2022 as a fan - supporting her club team-mates - ahead of her own home World Cup in July.

Now, the forward is hoping the same can happen for the Matildas as they aim for a successful tournament, having previously never made it past the quarter-finals.

"The excitement is definitely building," Raso said ahead of Man City's game against Tottenham in the WSL on Saturday, live on Sky Sports.

"When I look at it now, I can't believe how close it is to actually being here, it's just around the corner. We're all looking forward to that. We've got a few games in Australia beforehand so I think we can build the hype around that.

"But having a home tournament in your home country with the fans, your friends and family, I can't imagine what that will be like and I can't wait for it.

"I was at a number of the Euros games. I was able to see that and feel what that was like. I was at the final and it was goosebumps when they won it in their country - I don't think I've ever seen something like that in the women's game.

"I feel like we've seen how much the game has grown and how it has been developing over the last few years, but then specifically being in England and having the Euros here, seeing the hype around it and how many people were on board.

"Football after that has been incredible and it's exciting to know where women's football can go. Having it in Australia will only boost that for us and hopefully we can do the same."

On the pitch, Australia head into the tournament having come fourth at Tokyo 2020. They beat Great Britain in the quarter-finals, before defeats to Sweden in the semis and the USA in the bronze medal match.

However, it still marked a hugely successful tournament for the Matildas and Raso says the team will use the experience as motivation heading into next summer.

"We went to the Olympics and we actually did really well, I think it's the best we've ever done at an Olympic Games," she explained.

"But playing in the bronze medal match and not coming away with a medal was pretty disappointing. So it drives you and makes you want to win and do more, knowing we've got the World Cup in our own country, I think that ignites that so we'll be looking to go all the way and do well in that tournament."

The World Cup draw took place on Saturday morning - just a few hours before Man City kick off against Tottenham at 11.30am - with Australia in Group B alongside Republic of Ireland, Nigeria and Canada.

Speaking before th draw, Raso said she does not have any one team in mind for the group stages.

She said: "I don't think we're too bothered, I think we're just all excited to see who we actually get. Once that comes out, we'll be able to focus more on who that opposition actually is so it's exciting." 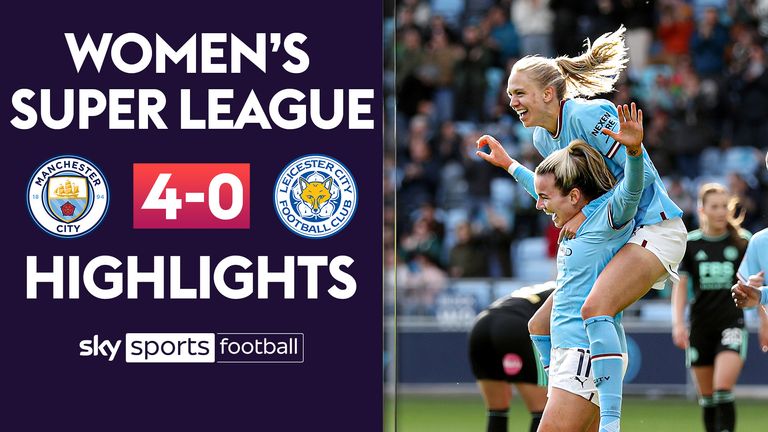 Of course, before the World Cup, there's the small matter of a WSL season to contend with. Man City picked up their first win against Leicester on Sunday - having been beaten by Aston Villa and Chelsea in the opening two games.

Raso has featured off the bench in all three games, with her first season at City last year punctuated by injuries. But now, she is fully fit and ready to compete for her starting spot.

"It was a bit of a tough start," the 28-year-old said. "We had two losses and then the international break but I feel like we came back from that refreshed. It was good to get our first win, but we know it well because we had a tough start last season, we lost a number of games. Hopefully we've got the ball rolling now.

"I'm feeling good. I'm fit, I'm training and I'm ready to go. Injuries are something that comes with playing professional sport so I've had a few niggles, but I'm good at the moment.

"I'll play my part, whether that's starting or off the bench, but obviously I want to start games. I want to be in the mix there so I'm pitching for that.

"At the moment, I've played in every game, which is good. Competition is strong, we've got a really good group, we're able to fight and compete in training and everyone is aiming for that starting spot. Hopefully it's close, I'm not the coach, but hopefully it comes soon."

Raso had somewhat of a journeywoman career before arriving at Man City, having played at clubs across her native Australia and in the USA. She then signed for Everton in January 2020, before making the move to the Academy Stadium a year later.

But it's the physical and unpredictable nature of the WSL that has kept Raso here for the last two and a half years.

She explained: "When I first came over, it was Covid so it was a little bit different. I didn't get to enjoy football with fans in the stadiums, but it's back to normal now, which is amazing.

"I absolutely love the league and that's why I've stayed around for a while.

"The league is really physical, really strong and each game you play is a competition. You don't know what the result is going to be on any given day and I really like that about the league so that's probably one of the big differences."

Hayley Raso on what makes a winning team

"Probably team culture. I feel like having that team that’s strong on and off the pitch, having depth, having strong competition, those are things that contribute to winning.

"I enjoyed winning the Conti Cup last season because I came here to win silverware, but winning the championship with the Portland Thorns back when I was playing in America was a big one too."

Next up is a trip to Tottenham on Saturday morning, live on Sky Sports Premier League from 11am. Spurs were a top-three rival for Man City last season, and Raso has noted the progress of Rehanne Skinner's side.

"Spurs have evolved over the last couple of years," she said. "You can see how well they're doing and how much they've progressed.

"They're a well-organised team, it's going to be a tough game and we're really looking forward to it. We know we need to keep progressing so it will be a tough game but one we're ready for.

"It'll be tough and physical. No game is an easy game in this league and this will be no different. We're preparing as usual, we're going through the tactics for it, but it's an exciting game and one we hope to get three points from."