The hosts had been leading by Andreas Weimann's early strike - Villa's first goal in 547 minutes - when they were reduced to 10 men in the second half after Benteke was dismissed following a clash with Ryan Mason.

The Belgium international was sent off after he pushed Mason in the face following the midfielder's second-half challenge and Lambert felt it changed the game.

He said: "I can't condone what Christian did, lifting his hand, but he was provoked. 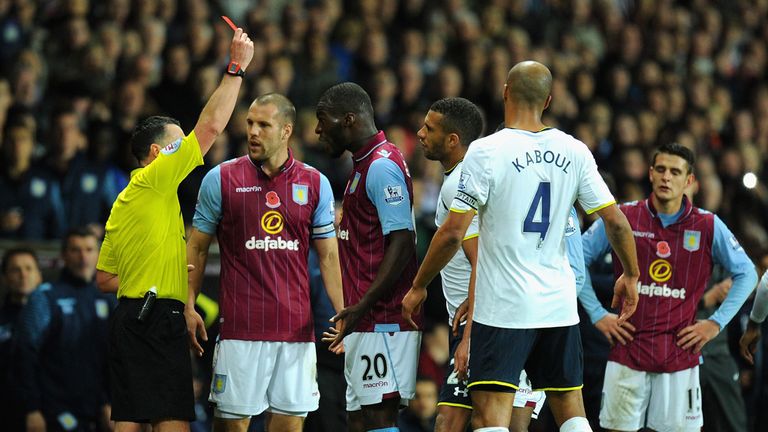 I can't condone what Christian did, lifting his hand, but he was provoked.

"If you go back a frame you see the lad putting his head in Christian's face. If you do that you understated why Christian did it, you don't get away with it, but my daughter can thrown a harder forearm than that.

"I understand the emotion and adrenaline rush, if someone puts their head in our face your natural reaction is to push them away.

"In sport you won't get away with it. Football is a game of emotion and that can happen. They couldn't cope with him the way he was playing.

"It's a setback for him and for us, he's going to be missing the next few games."

Benteke will now miss Villa's next three games with Lambert's side 15th in the table.

And Lambert added: "(Before the red card) I thought we were really comfortable and well in the ascendency of the game. I thought Benteke was excellent and he and (Charles) N'Zogbia were playing ever so well together.

"It changed the game in the sense it gave Tottenham the ascendency to play against 10 men.

"I couldn't fault the lads for the way they played. (Benteke) was getting back into things pretty good.

"I don't think we deserved to lose the game but at the moment the things are going against us. (But) You stick with it, you don't let your head go down. Performance-wise we hit the post, had chances, it just wasn't to be."