Three decades on from 1989/90 triumph, former Reds captain Thommo recalls the jubilant scenes at Anfield and explains why the current crop are closing on a title no one will forget 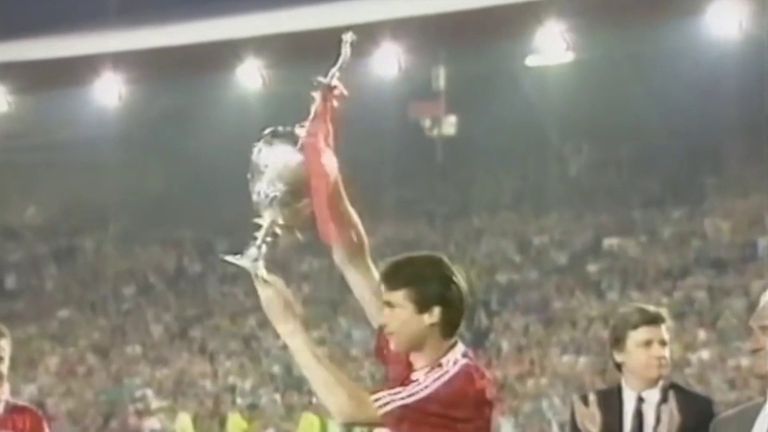 Phil Thompson recalls the jubilant Anfield scenes 30 years on from Liverpool's last league title and explains why 2020 will never be forgotten.

April 28, 1990, was a day that initially went down in Liverpool's illustrious history for all the right reasons.

A 2-1 victory - sealed by goals from Ian Rush and John Barnes - over Queens Park Rangers at Anfield on this very day 30 years ago secured Liverpool their 18th top-flight title.

At the time it seemed Liverpool's dominance would continue through the 1990s just as it had the 1980s, but the Reds haven't got their hands on the title since, and the date April 28 has served as a reminder of their absence from the very top of English football.

However, with Liverpool's three-decade wait to be crowned champions nearing an end, former Reds captain and Sky Sports pundit Phil Thompson, who was in the Anfield dugout that historic night, looks back at Liverpool's last title triumph…

I was a humble reserve team coach in those days. I was probably on the bench that day, there were only two substitutes back then, Ray Houghton was one and Gary Gillespie was the other.

I just can't believe it [has been 30 years]. If you'd have said on this day 30 years ago that we wouldn't see another league title, I'd never have believed it. It's amazing.

The team at the time was probably an aging team, but it was still fantastic, full of quality players. Some of those players were my mates, former playing colleagues - Alan Hansen, Steve Nicol - it was a good team.

Champions in the face of criticism

Liverpool clinched the 1989/90 title having lost just one of their final 23 league games, a run that stretched back to December, but the Reds were subjected to criticism throughout their title-winning campaign…

Even then, in October and November, people used to get carried away, calling for the manager to be sacked. But when it was all over and done with, that's the time to criticise. It's what happens come May, when the trophies are given out, that matters.

Maybe the criticism was because it was an ageing squad but, lo and behold, the team were well and truly worthy title winners. It was a great team.

Bruce Grobbelaar was in goal, Barry Venison, Ronny Rosenthal, John Barnes, Ian Rush, there were a lot of goals.

The championship trophy was one which was ever-present in the Liverpool trophy room. It was a great trophy.

All the trophies changed with the inception of the Premier League in 1992 and, wonderful as it is, we still find enormous pride with the old First Division trophy.

A lot of people, a lot of fans, are desperate for this season to be null and voided and for Liverpool fans to fall flat on their faces.

I think those people will still get their fix because Liverpool won't be able to celebrate it the way we would like, with a crowd or parade, but Liverpool will still be Premier League winners.

There will still be an asterisk next to it because this is an absolutely tragic time we are living in with the deaths we have.

But when people look back in years to come it will be incredible times, the asterisk will be there, and it will say when the coronavirus pandemic took hold Liverpool won the Premier League title.

For every year since that has passed, every season since, I've always thought Liverpool Football Club could win the title. It's been awful thinking that for 30 years, so to get this monkey off our back will be a big thing.

It won't feel the same, but it will at least give Liverpool fans the satisfaction of saying we won the Premier League title for the first time.

More titles around the corner

In 1990 Aston Villa were pushing Liverpool close. This time around, you can see Liverpool and Manchester City being the dominant forces again.

Signings are going to play a big part for all the other clubs, Manchester United, Chelsea and Tottenham all have to be a lot better to compete again, but the gap to Liverpool and Manchester City is so much that's it's going to be very hard to recruit as much as those chasing clubs would wish.

So Liverpool are going to have the opportunity to go again next year, but the squad has to be kept together. The rumour mill has already started about players [leaving] and Liverpool strengthening, but make no mistake, this is a really good time to be a Liverpool supporter.

The age of this team, if they stay together for the next couple of years, which I expect them to, I can see more titles around the corner.