Goalkeeper Lukasz Skorupski tested positive after reporting symptoms on Thursday night and is second positive case in Poland's camp after Leeds United's Mateusz Klich; Poland will have Robert Lewandowski available when they face England at Wembley on Wednesday evening

Poland have confirmed that back-up goalkeeper Lukasz Skorupski has tested positive for coronavirus ahead of their World Cup Qualifier against England.

The 29-year-old reported symptoms on Thursday night and immediately self-isolated before recording a positive test in Poland's latest round of testing.

It is the second positive coronavirus case in Poland's camp following that of Leeds United's Mateusz Klich.

Klich missed Poland's 3-3 draw with Hungary on Thursday and will also miss the games against Andorra on Sunday and England on Wednesday evening.

However, Poland will have captain and all-time leading goalscorer Robert Lewandowski available for selection at Wembley after Bayern Munich agreed to release him for international duty.

The German champions originally blocked Lewandowski from travelling to the UK due to strict coronavirus protocols in place in Germany whereby players returning from a "mutation zone" nation, such as the UK, would have to quarantine for 14 days.

But the German government granted the 32-year-old an exemption from quarantine on his return to Bayern, meaning he will be able to face Gareth Southgate's side on Wednesday. 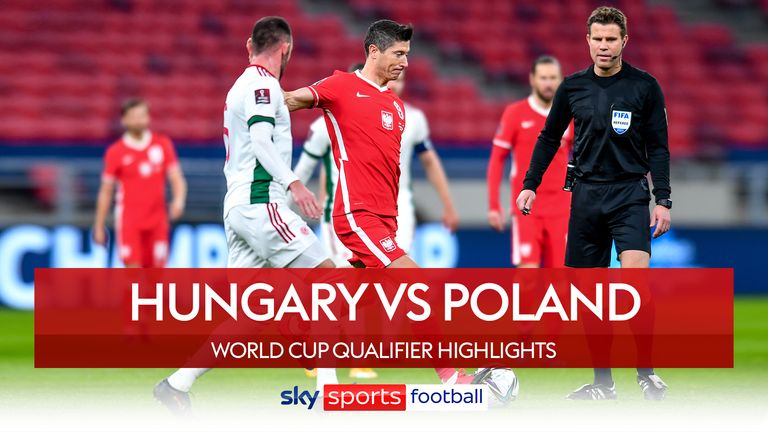 Highlights of Hungary vs Poland from FIFA World Cup European Qualifying Group I.

On Thursday, Lewandowski fired in an 83rd-minute equaliser to rescue his side a point in Hungary in a 3-3 draw.

England strolled past FIFA's lowest-ranked side San Marino at Wembley on Thursday in their opening World Cup qualifying game.

And after playing Albania in Tirana on Sunday, the Three Lions face Poland at Wembley looking to further enhance their grip on Group I.