The Magic Man Paul Merson is back with his latest round of Premier League predictions...

Tottenham and Liverpool kick off the weekend's action on Saturday lunchtime. Then, our live coverage switches to Super Sunday where Wolves take on Burnley and Everton host West Ham.

There is also an interesting Monday Night Football ahead with Southampton taking on Brighton.

Keep reading to see what Merse is predicting this weekend...

I fancy Liverpool based on the counter-attack game. This game is bigger for Tottenham than it is for Liverpool - this is a game Spurs can't afford to lose, they've got to have a go especially after what happened at Watford. Liverpool will pick them off.

If you want to win Premier League titles then you have to win these games, so Liverpool will be judged on this too. I think they'll win this one but toppling Manchester City for the title will be so difficult.

I'm really looking forward to watching Wolves play on Super Sunday. I like what they're about. They play great football and always look to play forward. This should be a home win. 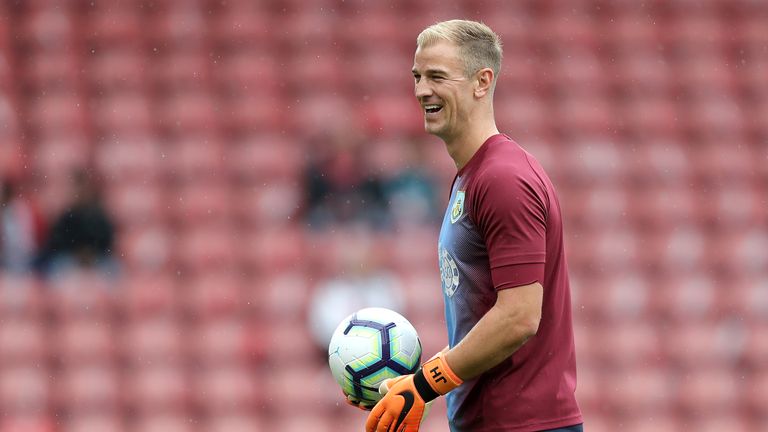 Joe Hart says he had a 'fantastic' summer

The two-week break came just at the right time for Burnley, who are in trouble this season. They had some big results last season that they'll struggle to recreate. The manager and their team spirit will be crucial.

If West Ham get beaten here, they could be up against it. Look at their next two fixtures: Chelsea and Manchester United. They could start the season with seven straight defeats! However, Everton have got a lot of players missing for this one. And in fairness to West Ham, they could have beaten Arsenal and Wolves with a little more luck. Score draw.

I'm going for a home win. Brighton have a habit of letting me down, especially away from home. It's a strange record as they play with such confidence at the Amex - they are a force. I think they get caught between sticking and twisting on the road - it's hard to pick up points away in the Premier League.

Danny Ings might be the difference. I like him. He's a good player. England could do a lot worse than taking a look at him.

Tough one this one. There will be goals as both teams will attack. I like watching Bournemouth play at home - you are always guaranteed a good time. However, Jamie Vardy is back for Leicester, which will help them. Score draw.

Cardiff will cause problems from set-pieces but will they get enough of the ball? Chelsea have been excellent going forward. Cardiff will not be able to live with Eden Hazard - he's just so good.

If Wilfried Zaha plays, Crystal Palace win. If he doesn't, they don't. Simple.

His pace opens the game up for Palace, which provides space for others to flourish. Huddersfield won't be able to cope.

Nothing but a home win here - it will be a case of 'how many?' I watched Fulham at Brighton. It's very nice to pass the ball around at the back when you're 2-0 up but come on? If they defended properly, they'd have won that game. It's alright to play 'total football' but there's a time and a place. If they try and play like that at Manchester City, then they'll get hammered.

Arsenal always give you a chance, as shown against Cardiff. That tells you everything.

Watford have been outstanding but United will be able to match their physicality. They can look after themselves. Away win.