From Willian and Thomas Partey coming in to Ainsley Maitland-Niles and Matteo Guendouzi going out, Alan Smith assesses the impact of potential transfers at Arsenal.

It is often said a new manager will need a couple of transfer windows at least to shape a team to their liking. It gives the boss a chance to weed out the unwanted and recruit their favoured sort to create something more in line with their ideas.

In this regard, Mikel Arteta is no different, even though he has shown an impressive ability to coach and coax players already at Arsenal into his way of thinking. That has been quite an achievement considering some had grown used to a lazy culture where sub-standard performances got continually overlooked.

No longer. A healthy accountability has livened everybody up. Like all the top managers, Arteta has started to create an environment that players want a part of - a crucial step in his early work.

But it is time to move the project forward by adding quality in certain positions, which is not easy at all when money is tight. Willian's free transfer from Chelsea looks like the first step, which surprised me at first given the Brazilian's age. Just turned 32 with lots of miles on the clock, Stamford Bridge has surely seen his best days.

So was this just a convenient move because he has the right agent? Something foisted upon Arteta by Raul Sanllehi, the head of football? Or does Arteta see something in Willian that can improve the team straight away?

One thing is for sure, as a right-sided attacker, his arrival asks immediate questions of Nicolas Pepe, signed at exorbitant cost this time last year. The Ivory Coast winger has blown hot and cold so far, which is not a great quality in Arteta's book. Undoubtedly talented, Pepe has got to kick on if he's going to survive because, in the short term at least, Willian can provide great know-how and quality on that right side.

Talking of that flank, it sounds as if Ainsley Maitland-Niles might be leaving the club. I know a lot of supporters would think that a shame, having just seen the home-grown product play very well in the FA Cup final.

A stumbling block here, perhaps, is agreeing on his role. Arteta, I think, feels Maitland-Niles could make it as a right-back, whereas the player himself is far from convinced. It is always disappointing seeing local lads leave, but a decent transfer fee would give Arteta some added wriggle room in the market.

With a few quid to spend, another central defender must be on the cards. This area, in fact, is the most interesting of all. Will William Saliba, for instance, be given an early chance after finally coming over from St Etienne? Saliba, by all accounts, has tremendous potential as a classy defender in the Virgil van Dijk mould.

I can just imagine Arteta on that training ground, working hard with the 19-year-old to instil good habits. Depending on how that goes, we might see the Frenchman let loose early on. Next to whom is another matter though. Will Arteta continue with three at the back, a system that helped bring about such huge improvement?

Plenty of questions there, as there are in midfield where the future of Dani Ceballos looks far from certain. I am sure Arteta would love to keep this clever ball player with an excellent work ethic who forged a useful understanding with Granit Xhaka. Real Madrid, of course, might have other ideas.

Midfield would further benefit if Matteo Guendouzi can be used in a deal to recruit someone like Thomas Partey, the much-admired lynchpin from Atletico Madrid.

As for Mesut Ozil, the tiresome saga rolls on. In an interview this week, the German insisted he is staying at Arsenal, even though he obviously does not feature in Arteta's plans. This is a funny one. Ozil is well within his rights to see out a four-year contract the club were happy enough to give. But from a purely football aspect, why would you do that if you are not going to play? 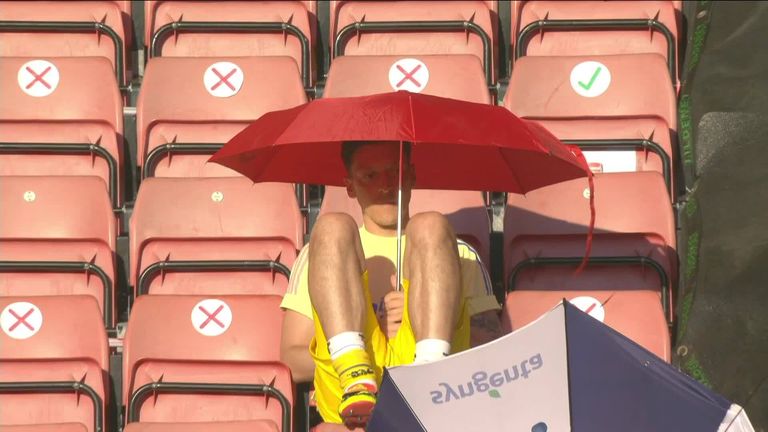 "This is my profession", he says. "It's what I love doing: being on the pitch, playing matches, showing the people, helping the club and my team." Ok, so if you love playing so much, why not go somewhere you're actually wanted?

There's an old saying in football - you are a long time retired. Come the end of his career, he might live to regret these wasted years.

For Arteta meanwhile, there is no time to waste. If the club can re-sign Pierre-Emerick Aubameyang, everyone gets a lift in an environment that must feel optimistic anyway. After that, it's about trying to improve the quality with the right signings while continuing to work on those oh-so-important playing principles with and without the ball.

This is no quick fix. But my old club is finally heading in the right direction, thanks to the vision of the man in charge.