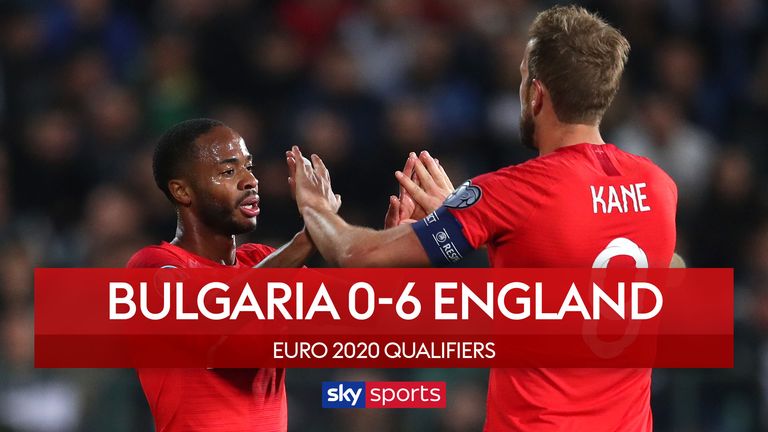 Highlights of the European Qualifying Group A match between Bulgaria and England.

England moved a step closer to Euro 2020 qualification but their 6-0 victory in Bulgaria was marred by the torrent of racist abuse directed at their players on a shameful night in Sofia.

The European Qualifier was on the brink of abandonment in the Bulgarian capital following two first-half stoppages during which England boss Gareth Southgate consulted match officials about walking off.

The dreadful scenes marred a stunning attacking performance from Southgate's side as Ross Barkley and Raheem Sterling scored braces in addition to strikes from Marcus Rashford and Harry Kane.

But despite moving the Three Lions three points clear at the top of Group A and to within a point of next summer's tournament, the emphatic victory paled into insignificance on a depressing night for football.

How England hit six on shameful night in Sofia

England made a dream start as they set about atoning for Friday's abject defeat in the Czech Republic, with Rashford rifling an emphatic opener from a tight angle through goalkeeper Plamen Iliev with six minutes on the clock.

Barkley tapped a wayward Sterling shot in to put England two up on 20 minutes, but things soon turned sour as the Croatian referee Ivan Bebek halted play on 27 minutes to allow the first step of UEFA's racism protocol - a message for abuse to cease on the public address system - to take place after monkey chants were aimed at debutant Tyrone Mings.

Play resumed and within five minutes England were three goals to the good, Barkley doubling his tally with a close-range finish from Kane's sumptuous cross, but the game was halted for a second time in the face of persistent racist chants.

A second stoppage looked to have left the game one stage away from UEFA's third and final course of action in their racism protocol - abandonment - but with the match officials apparently claiming not to have heard the chants, play continued and England persevered until the break, with Sterling adding a fourth with a simple finish from Kane's selfless square pass.

A group of supporters, dressed in black and making Nazi salutes, were seen leaving the ground en masse during the interval, but audible racist chants could still be heard throughout the second period, despite Bulgaria captain Ivelin Popov pleading with supporters. 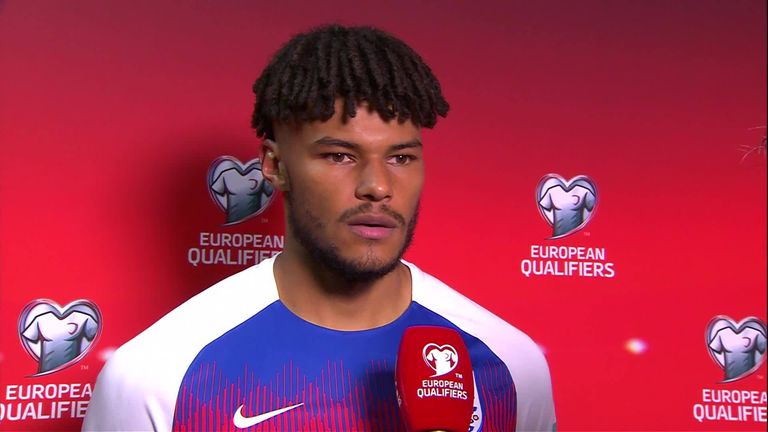 England debutant Tyrone Mings says he is proud of how the players handled the racist abuse they received from some Bulgaria fans.

England played on though, dominating in all areas against the below-par Bulgarians, who fell asleep on 69 minutes as Sterling latched onto Kane's through pass and doubled his tally with a clinical finish.

Kane struck the post on 82 minutes but finally got in on the act after laying on three goals for his team-mates, the Three Lions captain nutmegging a defender before rattling a shot home at the near post to seal an emphatic victory that will be remembered for all the wrong reasons.

Southgate: We made a statement 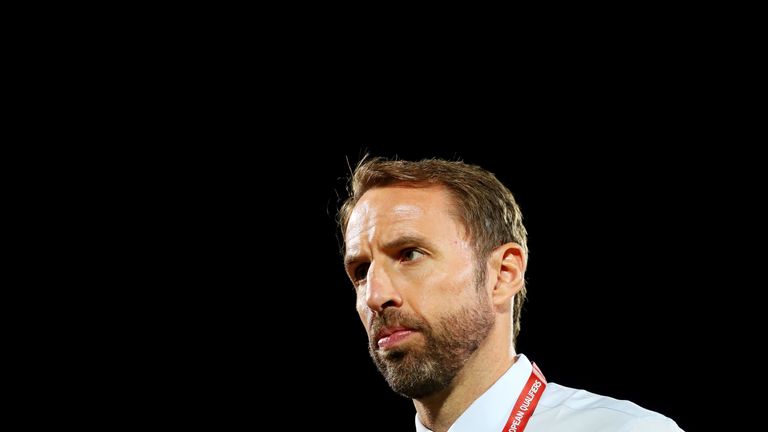 England manager Gareth Southgate says his side could have gone further and left the pitch after they were subjected to racist abuse at their Euro Qualifier in Bulgaria.

England manager Gareth Southgate told ITV: "The officials were onto everything very quickly. We reported things immediately when we heard it and were in constant communication with the fourth official and the referee. I was in contact with the players, particularly in the first half and at half time. We know it's unacceptable situation.

"We've made two statements by winning the game and also raising the awareness of the situation. The game was stopped and I know for some people that won't be enough but we were as a group on board with that process." 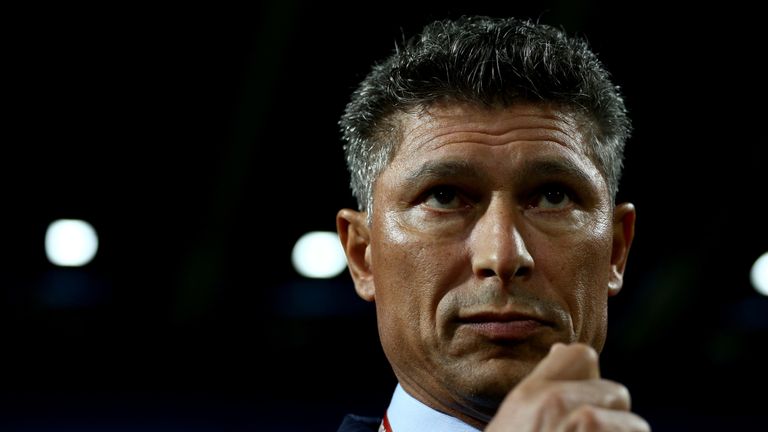 Bulgaria head coach Krasimir Balakov says he did not hear any racist chanting during Monday's match against England.

Bulgaria head coach Krasimir Balakov: "I was concentrating on the game. I didn't hear anything, but I just talked to the English press, and I told them that if this is proven to be true then we have to be ashamed and apologise for it. But once again, first it has to be proven to be true.

"If our captain spoke to the fans, it was probably because of the way the team was performing, and the whole topic in the build-up to the game. The fans are emotional, you obviously want me to say this and I have to say it, if something happened, I'm sure it was a small group of people who were really were out of their minds because it was unacceptable, if it happened of course." 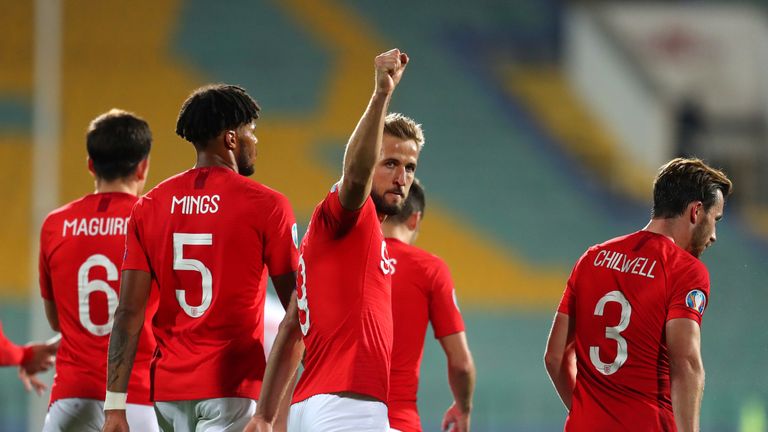 FA chairman Greg Clarke says the England players opted to finish the match in Bulgaria because they did not want the racists to win.

FA Chairman Greg Clarke told ITV: "I would like to see a very stringent review of racism - I know they take it very seriously. If we say we have zero tolerance on racism - one person making monkey noises is the same as 100 - zero tolerance, is zero tolerance.

"With the help of UEFA we need to address that. But we need to address racism in England - we have it throughout the pyramid down to the grassroots - we shouldn't take the moral high ground we should help to drive racism out of our game and have zero tolerance on it." 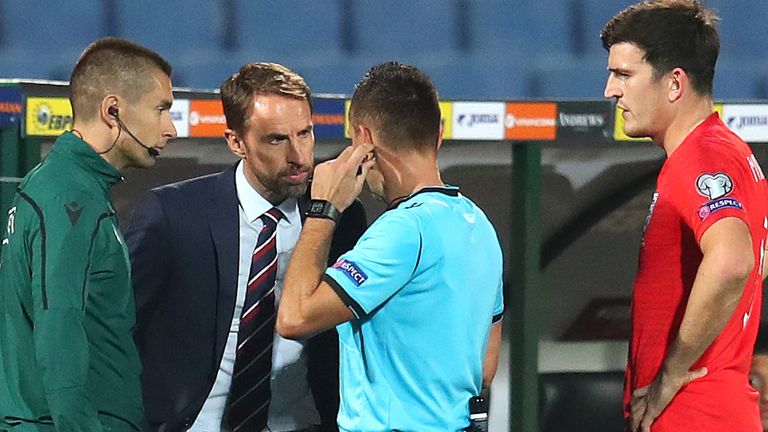 Former England striker Darren Bent admits it's positive that their game was temporarily stopped against Bulgaria but thinks UEFA must do more to stop racism.

England host Montenegro at Wembley on November 14 before concluding their Euro 2020 qualifying campaign with a trip to Kosovo on November 17. A draw in either game will be sufficient for England to qualify for next summer's tournament.