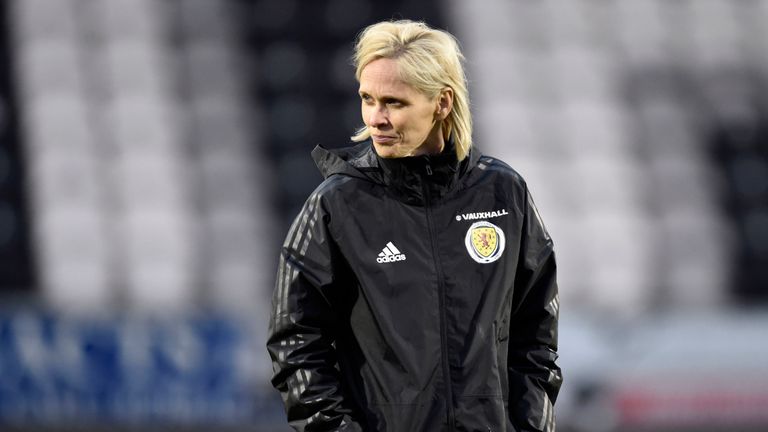 Scotland manager Shelley Kerr wants her side to avoid being distracted

Shelley Kerr insists her Scotland Women's side will not be distracted by goal difference permutations in their crucial World Cup qualifier against Switzerland.

The team is trying to qualify for a World Cup for the first time and two wins against Switzerland and Albania could secure a place in France next year.

However, with Switzerland having opened a three-point lead at the top of Group 2 by handing Scotland their only defeat of the campaign - a 1-0 victory in April - Kerr's side require a two-goal victory to retake control of their fate.

"We need to win both the games. There's lots of permutations there," Kerr said after naming her squad for the crucial encounters.

"I think people have been talking about we need to beat Switzerland 2-0 and we still need to beat Albania but equally Switzerland have got a tough game after our game against Poland away from home."

"So I think our focus and our main objective is to try and win both games and beyond that as a squad we won't be looking at anything else."

There was only one change to the squad that delivered victories over Belarus and Poland in June, as striker Zoe Ness replaced the injured Hayley Lauder.

The team that finishes top of the group progresses to France, while Scotland would maintain a strong chance of being one of four second-placed teams to reach the play-offs if they failed to beat Switzerland.

Kerr is hopeful that a new record attendance for a Scotland women's match can be set when they face the Swiss at St Mirren's The Simple Digital Arena stadium on August 30.

"I think trying to generate the home support and getting them on side will be extremely critical for the game," Kerr said.

"We're hoping that the previous game against Poland has inspired everyone to come out and support their national team."

"As a squad we'll do our best to try and perform but I would urge anyone to come along and give us their support."