Chloe Morgan is always alert to the call for action, whether she's keeping goal for Crystal Palace or helping others get the right result.

Morgan spent six years with Tottenham - broken briefly with a loan stint at Arsenal - before switching clubs last summer to play for Crystal Palace in the FA Women's Championship.

The 31-year-old juggles her football commitments with her day job at a national law firm, where she specialises in cases relating to serious brain injuries.

That would be enough to fill anyone's diary, but Morgan somehow manages to cram so much more into hers. She is the goalkeeping coach and diversity and inclusion officer with Goal Diggers FC, an award-winning amateur club for women and non-binary people. In September, she joined the board of the influential network organisation Women in Football. In recent weeks, M-Power Goalkeeping Coaching has been squeezed into her Twitter bio as well.

The programme is designed to help boost the ranks of shot-stoppers coming through in the women's game, and with Bristol City's Sophie Baggaley and Leicester's Championship title-winner Sophie Harris already on board for the first coaching camp in June, there will be no shortage of 'keeper knowhow for attendees aged six to 16 to soak up.

As with Goal Diggers, Morgan wants to make sure everyone feels welcome - it's all abilities, all-inclusive.

"I'm really excited about it," she says, speaking at a panel event hosted by the Woman@Sky and LGBT+@Sky network groups for Lesbian Visibility Week.

"M-Power is specifically for girls and women, including trans, and non-binary people. It's about trying to encourage more people to get into goalkeeping because I think it's still one of those areas, for the men's and women's games, that has not been at the forefront of agendas. Outfield players have always taken priority."

She's determined to change the perception of the position and catch the next generation falling in love with the women's game.

"Personally, I think goalkeeper is the best position on the pitch!" she says with a smile. "It's your last line of defence and if you're not letting in any goals, you're not losing games!

"It always surprises me that it's the position that gets given the least attention. The premise of M-Power is to redress that balance and to try and get more women, girls, and non-binary people involved in goalkeeping, from grassroots up to the elite level."

Having frequently seen friends and fellow players swerve the gloves, Morgan is familiar with a major reason for depleted 'keeper numbers - the fear factor.

"There is often that fear of the unknown with going in goal. I've spoken to so many women and non-binary people who will only go in goal if it's the last position and they have to, or because they're rotating. There's just such a reluctance there.

"The fear is that they don't know what they're doing, or they're going to mess up or make a mistake. I just want to give people the tools and the techniques and encourage them to see goalkeeping as fun and creative - a very diverse and unique position."

For Morgan, diversity in sport is something to be celebrated even more than a hard-earned clean sheet. She was named on the most recent Football Black List, and is nominated in the Sport category at Thursday's DIVA Awards, a key event being held in Lesbian Visibility Week.

Community counts and she believes fiercely that everyone should be made to feel welcome, particularly if they're LGBT+ and uncertain about fitting in. Football is no exception, although she is wise to the pressures of the professional game - men's and women's.

"I would only ever encourage any player to come out if they felt supported, safe, and they wanted to," she explains.

"Being gay is something that's very personal to someone, and you should never tell someone to come out and 'be the martyr' who leads at the front. Your sexuality and your private life is completely down to you.

"But I would absolutely love for there to be an environment and a safe space for footballers to all feel they can show themselves on and off the pitch. I feel a lot of the women's football community do - it's probably one of the more inclusive spheres to be in.

"I felt comfortable coming out and being openly gay. That wasn't an issue for me. I haven't received any backlash and I feel quite fortunate." 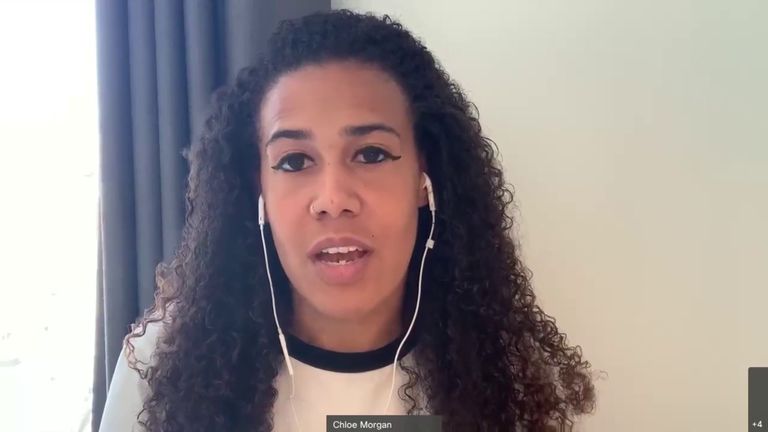 Morgan, speaking on a Sky panel event to mark Lesbian Visibility Week, says it’s important to her that fellow players who are also LGBTQ+ feel welcome in the game

She holds a concern, however, that as the profile of women's football soars, and the attention it gets increases, players may begin to feel their lives have become too public and the strong LGBT+ representation fades as a consequence.

"It's becoming more of a mainstream product, and visibility does sometimes create issues," she says.

"Women were banned from playing for such a long time. Once we were allowed, there was a sense of having to fight against discrimination on a gender basis. That's made the environment more cohesive and accepting.

"Now, that might change a bit. You're going to get more voices, more opinions. But having players who are not just out but who are speaking out in interviews against issues, that will help going forwards. We started from humble beginnings, and that made us more inclusive."

An awareness week for LGBT+ women across society is worth shouting about, feels Morgan, and she is not surprised to see the message resonating in sport. As the Women's Super League and feeder leagues prepare for an exciting new chapter from the 2021/22 season, she stresses the need to embrace spirit and character.

"What I want to do is maintain the growth and continue to have the same ethos. That will also take responsibility from broadcasters and commercial partnerships celebrating the LGBT+ community in women's football because it is such a massive part of the women's game, and it's a unique facet.

"I'd love to see sponsors being very much on board with having LGBT+ athletes and promoting that, and I don't just mean at Pride or at LGBT+ History Month."

Keeping visibility woven into the fabric of women's football? With Morgan where she needs to be, it sounds like the game is in safe hands.

Lesbian Visibility Week runs from Monday, April 26, to Sunday, May 2.