Gary Neville has called for patience at Manchester United in the wake of their defeat to Crystal Palace, saying there is no "shortcut" back to the top.

Ole Gunnar Solskjaer bemoaned Manchester United's second penalty miss of the week as his side fell to a shock 2-1 defeat to Crystal Palace on Saturday.

Having been held to a draw at Wolves when Paul Pogba failed to convert, Marcus Rashford's second-half spot-kick hit the inside of the post before Palace claimed their first Premier League win over United.

Speaking on the Gary Neville Podcast, Neville said: "I think United are going to have moments like that in this period, there is going to be pain and there are going to be defeats that you can't quite explain. Beating Chelsea emphatically on the first day, playing well at Wolves and could've won the game. Then all of a sudden, you're up against Crystal Palace and you lose at home - it's quite mystifying.

"They're the type of results you get when you're trying to develop and change and transition out of one culture to another.

"All Man United have to do is remain patient and stick to what they're doing." 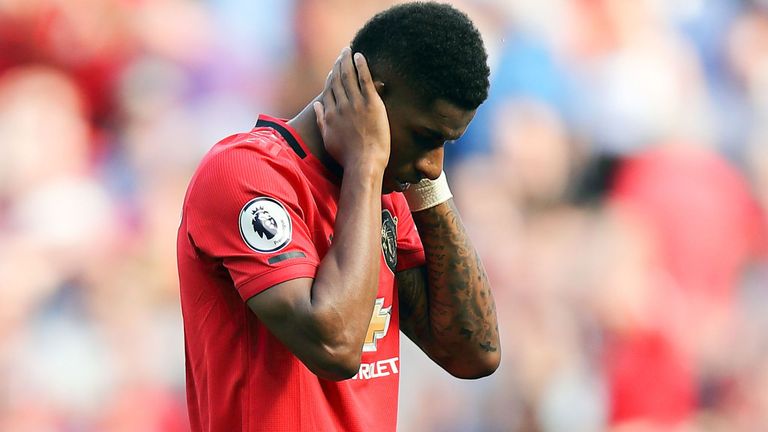 This is Solskjaer's first full season in charge of United, spending over £140m in the summer to recruit Harry Maguire, Aaron Wan-Bissaka and Daniel James.

Solskjaer is looking to build with youth and enthusiasm at the heart of the philosophy following on from some expensive big-name signings not working out at Old Trafford.

Neville added: "The most important thing about the transfer window for United and Ole Gunnar Solskjaer is that they don't make mistakes, not that they do loads of business, but it's about making sure they have the right type of players.

"It may seem like too far into the distance but I would suggest four or five transfer windows to get things absolutely right and get back to the type of squad he would want to challenge these Liverpool and Man City teams. I've said before, he's got to be ready, not at the end of this season, not next season, but the one after, to challenge for the Premier League title.

"Potentially when Pep Guardiola has left Man City, or Liverpool have had another round of recruitment and another set of players in...Ole has got to be ready to pounce. It's a long term thing, there's not going to be quick fix or magic wand from any manager. United have tried David Moyes, they've tried Louis van Gaal, they've tried Jose Mourinho, all proven and Ole Gunnar Solskjaer is going down the long road, not the quick path.

"There's no shortcut, there never is, and for me, it's now about making it through these difficult moments, like losing to Crystal Palace and you feel like the world is going to fall in that but people must remain patient.