Gary Neville believes David de Gea's drop in form is more serious than just a blip and has urged the goalkeeper to go "back to basics".

De Gea had the finger of blame pointed in his direction for Tottenham's opening goal in the 1-1 with Manchester United on Friday night.

The mistake drew some strong criticism from Sky Sports' Roy Keane - and the pundit had also labelled the goalkeeper arrogant after United's 1-1 draw with Everton in March.

The numbers do not make good reading as De Gea has now made seven errors leading to opposition goals since the start of last season - the joint-most among Premier League players.

Neville thinks his standards have dropped and puts the plummeting form down to confidence issues.

"He was the one player United could rely upon for the last four years but he's not the same," he said on the Gary Neville Podcast.

"He hasn't been the same for some time. When form drops for six months it's a blip but when it goes on for a year you start to worry. When it goes over two years it becomes more permanent.

"That is now a fair representation of what De Gea is as he's making lots of mistakes. Ones he would never make - he was always somebody you could completely rely upon. It can only be a confidence thing. The arms, legs and body are the same - it's got to be the mind.

"The reception he's got in Spain has affected him. He's even been booed by Spanish fans when he's wearing the Spanish shirt. In the World Cup in 2018 he really struggled and from that he's doubted himself. Mentally he's not quite the same." 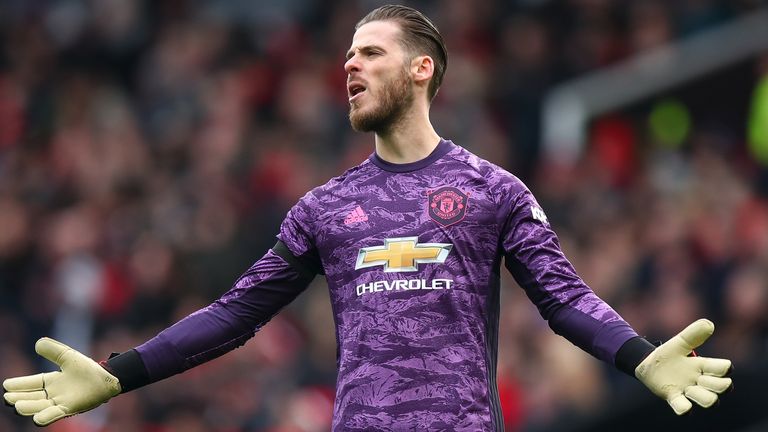 De Gea's plummeting form has sparked talk of Dean Henderson replacing him as Manchester United's No 1 next season. Henderson is on loan at Sheffield United and has developed into one of the most reliable goalkeeper's in the Premier League.

If De Gea is to remain as the main man at United, Neville has offered him some words of wisdom.

"There's only one thing you can do when you're having a tough time: work. Work harder than you have ever done in your life. What will happen is that you will tell yourself the amount of work you put in you deserve to be good again. That means coming in at 7.30am and leaving at 6pm if needs be. He has to do something to stop the erosion.

"Mistakes like that can happen on the first game back but it's happening far too much over the past couple of years." Former Manchester United goalkeeper Mark Bosnich is in agreement with former team-mate Neville and believes the Spain international needs to address a technical flaw to improve his shot stopping.

"He has had a season that has been full of mistakes that he hasn't made on a consistent basis in the past," Bosnich told Sky Sports News. "There is no doubt about that.

"In terms of the goal against Tottenham, a lot of people obviously are talking about the delivery that Roy Keane made. But the bottom line is whether you agree with the way he delivered it or not that is Roy's style. It was a mistake.

"The most important thing, and I am sure his goalkeeper coach would know this, from a technical point of view is that there is something wrong when he sets for shots. You saw it in that [Tottenham] goal.

"As a goalkeeper if you set for shots and your feet are outside the width of your shoulders you are going to have real problems because the natural reaction is then to go backwards when the shot is hit quite hard.

"You have got no room to manoeuvre your feet and if you start going backwards as a goalkeeper and the ball hits you, invariably it is going to go in the back of the goal. So that is something that they definitely need to work on.

"Obviously, they have got (Dean) Henderson who is playing so well at Sheffield United as well.

"Gary (Neville) is right in what he is saying, it has been more than a blip this season or so."

'Pogba must lead from the front'

Neville, meanwhile, has called on Paul Pogba to lead by example as the club's 'one true world-class player'.

"A committed Paul Pogba can be a great player for Manchester United," Neville told Sky Sports. "His goal and assist numbers are very good over the last couple of seasons.

"They are up there with the best. Hopefully with the economical problems and clubs can't spend 80, 90,100 million on players, United will keep him. Pogba will then understand that's he's staying - all I ever want from him is commitment.

"I've never blamed him for United's troubles, I do believe he's the one true world-class player, although I would have put David de Gea in there two years ago. Pogba should be the one to lead from the front and if there's speculation around his future it does create doubt in the dressing room. Now there's a better chance of that team succeeding."