Speaking on his podcast, Neville said: "It was a big moment for him [Rashford] and hopefully that now gives him the confidence to rise against, puff his chest out and do the things that he does because he is an excellent striker, an excellent forward"

Speaking on The Gary Neville Podcast, the former United defender talks about the importance of Rashford playing with "passion and fire" and how Ralf Rangnick has come out of a tough week stronger than he started it.

"There was a lot of questions being asked of Marcus Rashford," Neville said.

"I'm not quite sure it's fair to suggest that he's distracted by off-field events as soon as he has a difficult patch. That's the easy thing to say because no one knows why he's having a difficult patch. It could be for a number of reasons: injury, loss of form, confidence, the team not playing well.

"But it's the easy thing to do, to point towards the off-field stuff. It was a big thing for him. The thing for me about Marcus Rashford is, yesterday when I saw him celebrate that goal, it brought joy to him and I think that's the most important thing when you are a football player. 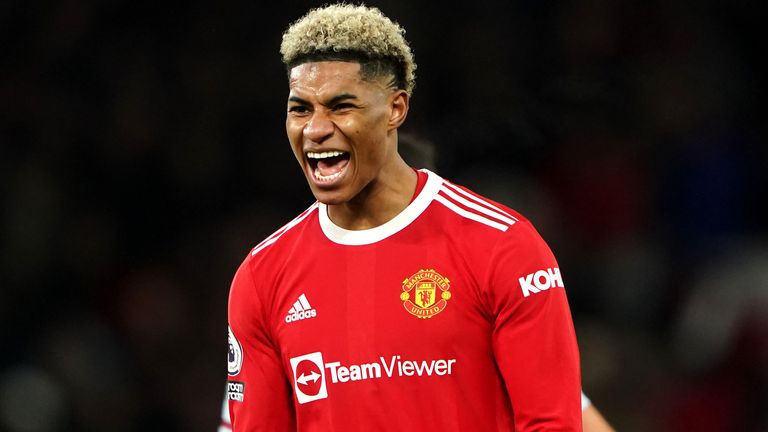 Gary Neville discusses Marcus Rashford's winner for Manchester United against West Ham, how it should have a big impact on the forward and give him a boost in confidence.

"Passion and joy. I'm not saying you have to walk around with a smile on your face because I was as miserable as sin when I was playing football and, to be fair, quite often cantankerous and argumentative! I want to see joy or passion or fire; I don't want to see that face of nothing.

"I think Marcus, in the last couple of months or so, has just looked drained in his face of any energy or spirit and that can't happen. You can have fire, you can have anger, you can have joy - all of those different emotions, but we need emotion, we can't have lack of emotion.

"It was a big moment for him and hopefully that now gives him the confidence to rise against, puff his chest out and do the things that he does because he is an excellent striker, an excellent forward."

A good week for Rangnick?

"Tough games - I say tough games, but games you think Manchester United would win. But with the way in which they have been playing, you are not quite sure anymore and I think the first half at Brentford, they rode their luck, but then got there in the second half and yesterday, there was that little bit of something happening sometimes which goes in your favour.

"I think Ralf Rangnick comes out of this week stronger than he started the week because of events that have occurred. I think everyone has seen what is happening and they are backing him and I feel that he feels stronger and more in control than he maybe was a week or two ago. The goal in the last minute is a big one. A big one for the club and a big one for the scorer. I think it was really important."

Is the title race back on?

"I think Liverpool are doing really well without two of their main players," Neville said.

"Things like [City's 1-1 draw at Southampton] give a little bit of encouragement. City are a machine and you don't expect them to make a lot of mistakes - but they could, and Liverpool and Chelsea have got to believe that. I'm not that disappointed in Liverpool because I think they have to be at full pelt all the time to get to City just because they haven't got the squad that City have got.

"But I do think Chelsea have [the squad] and I expect it to get close. I don't expect this runaway league; five weeks ago, we expected this three-horse race and we've almost been pushed into a feeling that City have won it. I don't think we have got the three-horse race back this weekend through the fact that Chelsea and Liverpool have won and City have drawn, but I don't think we are going to have that runaway 20-point championship that we have had sometimes with City. FREE TO WATCH: Highlights from Liverpool's win over Crystal Palace in the Premier League.

"It can happen. Liverpool have got it in them if they can keep that 11 together and get Sadio Mane and Mo Salah back flying, but this squad that Chelsea have got, if they can get Lukaku absolutely buzzing, bashing people around, backing into them and rolling them like he did in that last half-an-hour [in the 2-0 defeat of Tottenham], and starting to put the ball in the back of the net - there's so many inventive players you could play around him - so if they can just hit form between them, they can play three games a week because they can change two players every game and not really have a dip.

"Whether it's Pulisic and Werner or Ziyech and Mount, you don't see a massive dip in terms of quality when one plays or the other. If Thomas Tuchel can keep them all happy, I think they can have a really strong finish to the season, I really do. I think the quality in the Premier League this season is outstanding and it doesn't deserve to have someone winning it by 15 points."

"Conte wants players," Neville said. "Conte is the only manager I've seen come to Chelsea and be the match of them. He won the championship in the first year and I thought he stood up to them in the second year and left on his own terms, almost like 'you're not going to mess me around'.

"He's a wise guy and I think he's going to get money out of Daniel Levy this week. I think he wants two or three players in that squad to reflect what he needs but also so he can achieve what he thinks would be a really good job this season, which would be top four. That would be an absolutely outstanding achievement for Conte and Spurs this season and they can do it.

"He needs all of his players fit and he probably does need those two or three players in, but he's the type that is unconventional. He's likely to have not consulted the recruitment department. He'll want his own players in and when I say his own players, I mean the ones that he has selected, the ones that he knows and that sometimes might make Levy feel a bit awkward - and certainly people at Spurs that want to go through the traditional system. I think they are going to have to have that arm wrestle this week, but he has probably got it within him to say to Levy and the Tottenham board, 'Look, that's the best I can do out there and you can see we are well off them'."