Jamie Carragher: Why I've changed my mind about VAR

Carragher: "I am now looking at it and thinking that I can't argue for it any more"

After VAR dominated another Premier League weekend, Jamie Carragher has explained why he has changed his mind about the technology and no longer wants it.

Everton's 1-1 draw with Tottenham at Goodison Park was a VAR-disrupted contest, including a lengthy decision on a Dele Alli handball and Yerry Mina's challenge on Heung-Min Son inside the area.

It was another Premier League encounter where VAR was a source of frustration and following the game, Carragher stated he had changed his mind and no longer supports the use of VAR in the league.

I defended #VAR at the start as I felt the process needed to be given a chance. I argued with people who were set against it, & I really wanted it to take the game forward. But we’re now talking about it more than we ever did about officials & decisions & that can’t be right. https://t.co/gyJK7nRPX6

"I was never pro-VAR. What it was is that I felt it should have been given a chance and in some ways, I felt I was fighting for VAR because so many people were negative about it from the start.

"VAR has been brought in to help our game. And when I say our game, it's not just the players, it is the supporters, the pundits, the owners.

"We have the best game in the world so how can we make it better? How can it move with the times? That's why I was supporting it. Never stand still. Other sports are doing it.

On Dele Alli's handball penalty incident: The VAR Anthony Taylor considered that both Alli and Mina were challenging for the ball in the air and Alli was under pressure from the attacker as the ball struck his hand. In his view it was not a clear and obvious error.

On Son Heung-min's red card: The red card, issued by the on-field referee, for Son was for endangering the safety of a player, which happened as a consequence of his initial challenge.

"I am now looking at it and thinking that I can't argue for it any more.

"I am actually tired of listening to people complaining about it and I have got nothing to come back at them with because the whole point of VAR was to help referees. 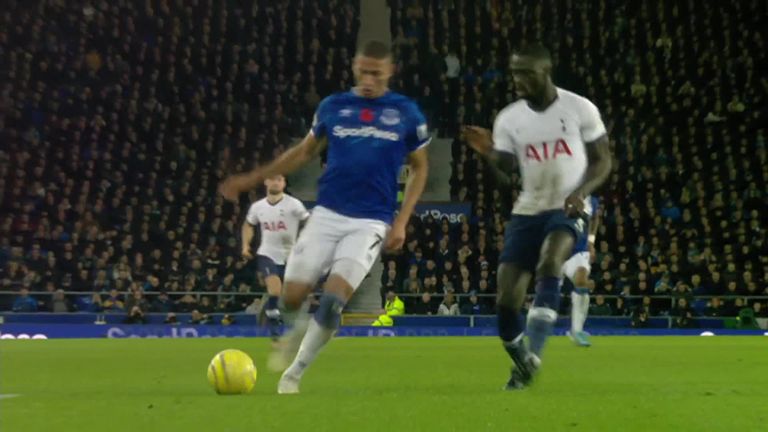 Everton forward Richarlison appeared to be taken down inside the penalty area by Tottenham defender Davinson Sanchez, however VAR agreed with Martin Atkinson's on field decision and no penalty was given

One possible improvement that has been suggested would be for the referees to go over to the monitor to take another look at incidents themselves but Carragher is unconvinced.

He added: "The thing about the picture [monitor] on the side of the pitch, I didn't want referees to look at that. I wanted someone to look at that cold in Stockley Park or wherever it may be.

"The referee is running over there having made the decision, the crowd is screaming and shouting, he's hot and bothered and he's got two sets of benches in his ear. 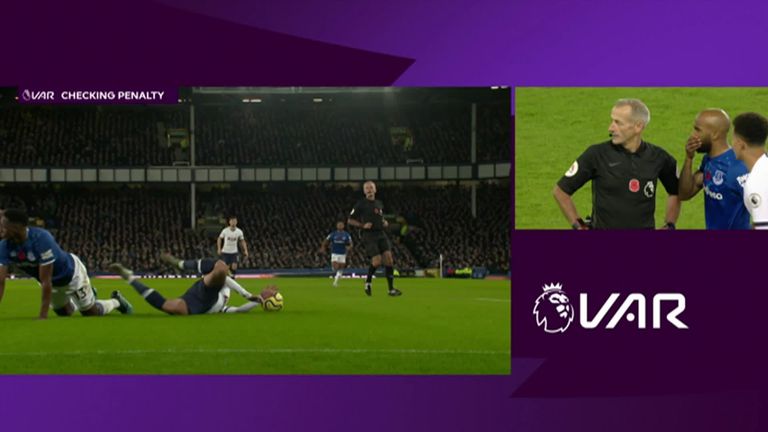 "So I am not sure it's this thing that will cure everything if the referee goes over there.

"But we have to try something. I am actually at the stage now where I don't want VAR and I can't believe I am saying that."

FREE TO WATCH: Highlights from Everton's draw with Tottenham in the Premier League

Everton manager Marco Silva has already spoken out regarding the fairness of VAR, and it was a subject he returned to following the Tottenham draw.

He said: "There were so many moments to stop the game [with VAR], some moments, like the penalty on Alli [handball], it was nearly three minutes to decide. They have to be more clear. It was not just the Dele Alli situation, there were moments in our box, in their box too, I saw all of the moments. I had my opinion in seeing them, so how can it take three minutes.

"We respect the football and the referees, and the VAR as well, I know they want to do the best for football. It is up to them to see how things are going. When you see a second half in the Premier League like we saw this afternoon, it's really tough. We saw completely different decisions with the VAR, unfortunately not for us."

Poch: Please use VAR in the right way

Unfortunately, Son was sent off after a horrendous injury to Andre Gomes, although the forward did not appear to be the main culprit. It was a situation where VAR could have intervened, according to Tottenham manager Mauricio Pochettino.

He said: "The VAR need to check if the tackle is bad from Sonny, and judge the action, not judge what happened after.

"It was clear that it was never the intention of Son to create the problem that happened after. Please, we are going to use the VAR in the right way, because otherwise we create a big mess and change the spirit of football.

Alli: I felt an elbow into my face

Alli was lucky to not be penalised for a handball, which would have given Everton a penalty not long after his opener, and he said he was not quite sure what the initial VAR review was being used for.

He told Sky Sports: "It's a strange one because when it first happened, I thought the ref was checking it because I felt an elbow. That's when my arms went up.

"In the moment, when I went up, I felt an elbow into my face, and I felt contact. I was thinking, obviously they're not going to give handball, but then the longer it goes on, it starts playing on your mind."