Manchester City complete signing of Ruben Dias for £65m; transfer follows City's 5-2 defeat to Leicester on Sunday. Jamie Carragher says Dias is crucial to City's title hopes - and Pep Guardiola will leave next summer at the end of his contract if they are not champions 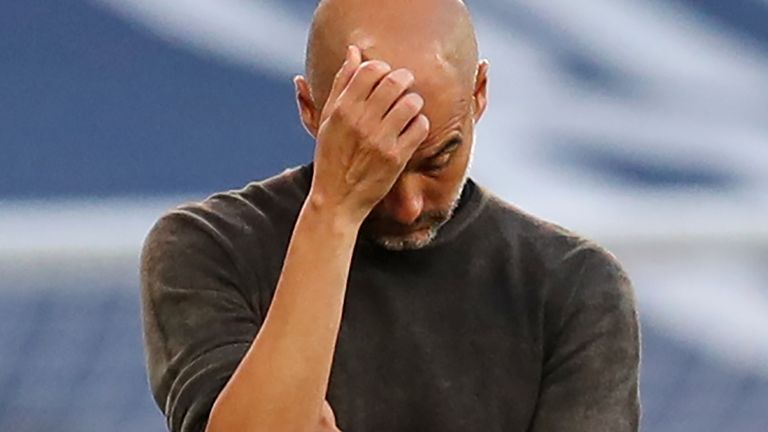 Manchester City have completed the £65m signing of Benfica centre-back Ruben Dias - but Jamie Carragher says Pep Guardiola's future at the club depends on it being a success.

Benfica announced the deal shortly after City's 5-2 humbling at home to Leicester City, which cast doubts over whether they will be able to reclaim their Premier League title this season after finishing 18 points behind Liverpool in 2019/20.

It was later announced by Man City on Tuesday the 23-year-old had signed a six-year deal with the club.

Before the confirmation of Dias' arrival, Jamie Carragher said City need a solution at centre-back if they are to win the league and warned if Dias is not the answer, Guardiola could walk away from the club next summer when his contract expires.

"I think there's really a lot at stake for Man City with this signing," said Carragher on Monday Night Football.

"I think if this signing doesn't work and he's not a huge success, I don't think City can win the league. I don't see Pep Guardiola staying at the club next season, certainly if they don't win the league. Maybe if they win the league he might sign a new contract. But then I think it's debatable also.

"And that is the big fear for me for Manchester City and this Pep project, there's so much riding on this.

"This is the guy to replace Vincent Kompany, if you like. £65m, a huge figure again, but if this doesn't work, I think it's possibly the end of the Pep project."

Earlier Carragher had analysed Guardiola's signings at centre-back throughout his career as a manager - and argued the former Barcelona and Bayern Munich boss has a "blind spot" when it comes to recruiting defenders to play in the heart of his backline.

"Dias - this is the transfer that has to work for Man City," he said. "The worry is that Pep's history, in terms of buying centre-backs, even going back to his Barcelona days, it's not great.

"The big worry for me would be, has Pep got a huge blind spot with centre-backs? Or, playing centre-back for Pep Guardiola, does he ask too much of you?

"When he started at Barcelona he inherits Carles Puyol and Rafael Marquez. Puyol, a legendary figure at the back, ends up being a World Cup winner. He can build around that.

"When he has to bring his own centre-back in, Gerard Pique has been fantastic but he's a Barcelona man, knows that way of working. So yes, Pep brought him in, but he understood that way of playing.

"Martin Caceres came in, £13m, didn't do anything. Dmytro Chygrynskiy came in, £22m. I think he started 10 league games and then he was gone.

"Guardiola then leaves and goes to Bayern Munich and inherits Jerome Boateng and Dante. Boateng goes on and becomes a World Cup winner, Champions League winner last season, so obviously a top-level defender. He brings one in, Medhi Benatia, £21m, within 12 months he's gone.

"You then come to Manchester City. He inherits Vincent Kompany and Nicolas Otamendi. Kompany is one of the greatest centre-backs in the history of the Premier League.

"John Stones, one of his first signings, that hasn't worked. £50m. Aymeric Laporte - it feels to me like the one signing he has made in that position that has worked for big money.

"And let's not forget, these are all big money. These are not small signings that you're trying to improve coaching-wise. You're buying the ready-made deal. Nathan Ake, early days but £41m is a few quid and it hasn't started great."

Can City beat Liverpool to the title? 'Forget about it'

Alongside Carragher in the Monday Night Football studio, Roy Keane added the loss of former captain Kompany at the end of the 2018/19 season was still being felt by Man City, and the heavy loss to Leicester proved it.

On the back of that performance, Keane says there is no way they will be able to beat Liverpool to the Premier League crown this season.

"It's amazing that we're even questioning where City are at but I think, given the signs in the last week, I still think they're getting over the loss of Kompany," said the former Manchester United captain.

"We can't appreciate what a loss he was to that football club. Obviously we all see him at weekends, but what the guy used to do during the week, he was such a big leader for them, no doubt a big character.

In terms of City closing the gap on Liverpool, forget about it. I can't see it.

"What I saw [against Leicester], was a lack of leadership, lack of characters. OK, Leicester have got a good team and they were good going forward - huge credit to them.

"But we talk about Pep, high intensity type of guy, and it's his fifth year at the club. Sometimes players just get fed up with the same voice. It's just the nature of the modern footballer. What I saw [on Sunday] I couldn't believe what I was watching.

"In terms of City closing the gap on Liverpool, forget about it. I can't see it."

Keane also questioned the spirit in the City camp.

"I was shocked watching Manchester City, I couldn't believe how bad they were defensively," he said. "To give up five goals at home. I got the impression some of the players are almost lacking a bit of hunger and desire - and you're a week into the season.

"I can kind of forgive City last year. OK, that can happen, tough season and still getting over the loss of people like Vincent Kompany. But the way they started the game I couldn't believe it.

"I was shocked watching, I couldn't believe how bad they were defensively."