Mohamed Salah is an all-time Liverpool great and the club must tie him down to a new contract, says Jamie Carragher

As Mohamed Salah makes it 100 goals in his Premier League career, Jamie Carragher argues for his status as an all-time Liverpool great whose achievements are still underrated and highlights the importance of him agreeing a new contract...

Jamie Carragher says Mohamed Salah will be in Liverpool’s all-time XI and wants to see him sign a new deal at Anfield.

"It is the three of them but everyone mentions that it was the goalkeeper and the centre-back that took Liverpool to this next level. Mo Salah is a huge part of that."

"While Liverpool have not spend big this summer like other teams they have had a lot of players sign new contracts. The one that is yet to sign is Mo Salah," he added.

"Now, he obviously wants a few quid. And rightly so. Good luck to him. He deserves it. He deserves to be one of the highest paid players in the Premier League for what he has done since he came to Liverpool, he really does.

"He is never injured and year after year he is top goalscorer. He just is. That is what he is. 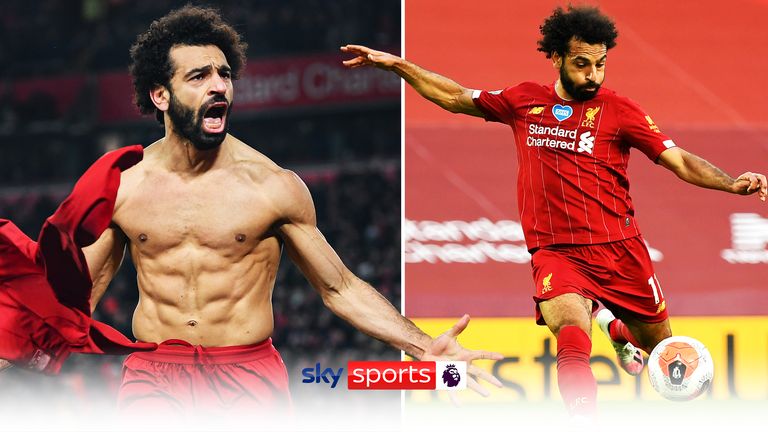 "I will say something else. When you pick your all-time Liverpool XI, there are positions where you just think, 'He is in.' Alan Hansen, Graeme Souness, John Barnes, Steven Gerrard, Ian Rush and Kenny Dalglish. You could fill all those positions no matter what this team does.

"When you think about strikers getting to 29 or 30, we talk about Cristiano Ronaldo being 36, that guy is a machine in terms of how he looks after himself.

Robbie Fowler: The boy from Toxteth who became 'God'

Football's Cult Heroes charts the rise of an "ordinary" boy with an "extraordinary" gift, the 'Spice Boy' tag, his Liverpool exit - and the second coming

"I think Mo Salah is as professional as Ronaldo, he looks after his body and I think there are a lot of years left in Mo Salah so I just hope this gets sorted sooner rather than later.

"You always debate about money, the player wants a bit more, the club wants a bit less, but that needs to be sorted. Fingers crossed it will because he deserves it for what he has done for Liverpool."

How Salah became a centurion

Salah's Premier League journey hasn't been as smooth as his run to 100 league goals would suggest. Remember the ill-fated 30-month spell at Chelsea which started it all?

The Egyptian winger had scored for Basel in both of their Champions League group games against Jose Mourinho's side, prompting his transfer to Stamford Bridge in January 2014.

But he would go onto make only 13 Premier League appearances for the Blues, and score only two goals, before he was shipped off on loan to Fiorentina and then Roma, who he joined on a permanent transfer in 2016.

His return to the Premier League a year later would mark the start of something very different.

"He's a fantastic player with speed," Liverpool manager Jurgen Klopp said after his move was agreed. "We said after last season that we would try to add things to an already really good squad.

"One of those things is speed. He brings that, as well as being able to provide and to finish. He brings all that."

Salah would bring more than just speed. In his first season, he equalled Roger Hunt's record from 1961 of scoring 23 goals before the New Year, and went on to edge Harry Kane in the Premier League Golden Boot race with his 32-goal haul.

From there, things kept on getting better.

"This is very special," Salah told Sky Sports after becoming the highest scorer in a 38-game Premier League season when winning that Golden Boot.

"I am trying to improve every year so I am very happy. It's special to break the record here."

Salah hasn't quite hit those goalscoring heights since, but he has broken the 20-goal mark in two of his three other full seasons in the Premier League, while adding a title winners' medal, plus another Golden Boot, to his trophy cabinet.

Now, 2,732 days after his first goal, Salah has become the latest member of the Premier League 100 club, and only the second from Africa, after Chelsea legend Didier Drogba.

The speed with which he has reached the tally - Sunday's meeting with Leeds was his 162nd Premier League appearance - puts him among the very best goalscorers in the competition's history.

"Mo's record is crazy," Klopp told Sky Sports at Elland Road. "I don't know how many more records he can break but he's probably desperate to do so.

"What a player - and he's still hungry. I saw him in the dressing room and we were all in the situation concerning Harvey Elliott but he was still not happy for not scoring one or two other goals.

"That's how top-class players are"

And at 29, Mohamed Salah is far from finished yet.