Richarlison has three goals in three games for Brazil and is set to lead the line when they take on Croatia in the World Cup quarter-finals on Friday; Tottenham forward now has 10 goals in his last nine games for his country but has struck just twice for his club this season

Ronaldo Luis Nazario de Lima. 'O Fenomeno'. 'R9'. Whichever name you want to use, there's no replacing Ronaldo in the history of the Brazilian national team and the hearts of the country's fans.

There had also been little prospect of replacing Ronaldo on the field since he exited the national team in 2006 - although his final international appearance came five years later, when he was granted a farewell match ahead of his retirement.

Luis Fabiano, Jo and Fred all tried and, to varying extents, failed to fill the void up front for Brazil, who have only progressed beyond the World Cup quarter-finals once since 2002, when Ronaldo's double beat Germany in the final.

But, while nobody is placing Richarlison in the same category as his legendary predecessor, Brazil's new 'R9' has ensured the national team are competing at a World Cup with a striker to be feared for the first time in 16 years.

Richarlison has scored three times in three appearances in Qatar, including a stunning bicycle kick against Serbia in the opening game. The 25-year-old's displays at this World Cup have extended his record to 10 goals in his last nine games for his country, while he now has 20 goals from 41 caps.

With form like that, Croatia will no doubt be doing all they can to neutralise Brazil's latest No 9 as they bid to shock the Selecao in their quarter-final on Friday and set up a last-four clash with either the Netherlands or Argentina.

But curiously, the striker that is grabbing the headlines at the World Cup has barely troubled the scoresheet for his club this season.

After joining Tottenham from Everton in the summer, Richarlison has scored just twice in 15 games, with both of those goals coming in a Champions League victory over Marseille.

The forward's record for the Toffees was more impressive, with 53 scored in 152 matches, but it still didn't match his achievements with Brazil, where he has close to a goal every other game.

The discrepancy can perhaps be explained by the differences between his roles at club and international level.

While he did spend much of his Brazil career as a winger, Richarlison has become firmly established as the central striker in Tite's team this year and has started five of their last six games as the No 9.

But with Spurs, he mostly plays off the main striker - Harry Kane - meaning much of his work is done out wide.

The graphic below shows how Richarlison plays more centrally and further up the pitch for Brazil, with whom he scores more goals and has more shots, while at Spurs he is required to be more involved in the construction of moves, as shown by his increased touches in the box, final-third passes and assists.

Richarlison also has increased defensive responsibilities with Spurs compared to those placed upon him with Brazil, as shown by him winning more duels, and making more tackles, interceptions and possession wins in the defensive third when playing under Antonio Conte.

By contrast, the increased number of possession wins in the final third Richarlison makes with Brazil demonstrates how Tite asks him to do his defending higher up the pitch - meaning he is closer to the opposition goal.

As Richarlison's output with Brazil compared to Tottenham suggests, the boy from the streets of Nova Venecia - an impoverished area in south-east Brazil - is viewed very differently by Tite and Conte.

Despite being signed for £60m, Conte admitted earlier this season that he was unsure how he would fit Richarlison into a side already containing Kane, Heung-Min Son and Dejan Kulusevski.

"At the start, I had some doubts about the balance to put three strikers like Richy, Harry and Sonny," said the Spurs boss. "You have to attack but at the same time it's important to have a good balance if you want to be competitive."

Unsurprisingly for a coach who loves to emphasise how much his side must "suffer" for the cause, Conte has been drawn to Richarlison's work rate and defensive qualities.

"Richy, Sonny and Kane - we are talking about three strikers who work a lot for the team," he said. "This is why I think we can play with these three strikers because they give us a lot of potential offensively, but at the same time defensively we have a good balance."

Richarlison's ability off the ball - Brazilian football expert Tim Vickery described him as having a "kamikaze intensity" - no doubt appeals to Tite, too.

However, the Brazil coach appears more attracted to what Richarlison can do with the ball at his feet - particularly when he's standing in front of goal.

"If Brazil play with a centre forward, he is it," Vickery told Sky Sports ahead of the World Cup. "It's all about marrying all the various bits together and for Brazil he fits.

"With quick wingers and both Neymar and Lucas Paqueta to set up the play, Richarlison is like a racehorse. He doesn't have a lot of recourse in terms of back-to-goal game but if you put him in front of goal, he's got this strength of character."

The idea of Richarlison as an ice-cold No 9 is shared by his Brazil team-mates, with Manchester United winger Antony telling FIFA+ in Qatar: "That's Richarlison - you give him a chance, he scores.

"You should see him in training. He shoots from anywhere and everywhere, all sorts of angles. He's an incredible player."

While the names that followed Ronaldo's showed Brazil were crying out for a quality No 9 during much of the previous decade, Richarlison has not made the shirt his own thanks to a lack of competition.

Gabriel Jesus, so crucial to Manchester City's success under Pep Guardiola and now a key player for Premier League leaders Arsenal, was demoted to the role of Richarlison's understudy before being ruled out of the World Cup through injury.

But at least Jesus made it to Qatar. The strikers who weren't even included in Tite's squad would surely have walked into most of the other sides at the tournament, but the Brazil coach preferred to put his faith in Richarlison. 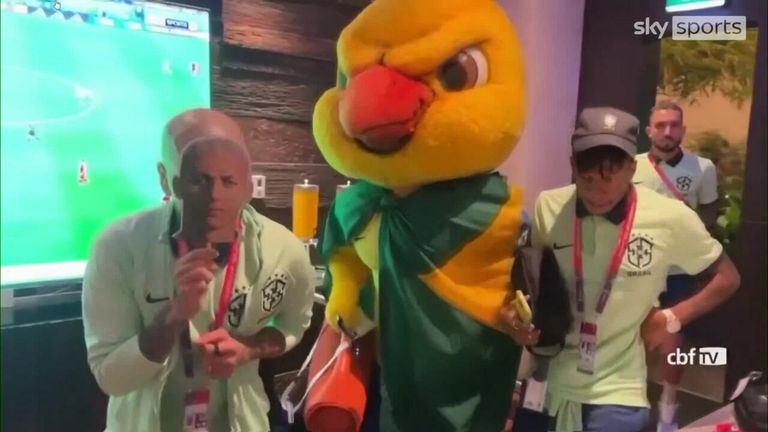 Brazil coach Tite says his players' celebratory dancing shouldn't be seen as disrespectful, insisting it's simply a part of their culture

The man known as 'O Pombo' - 'The Pigeon' - is yet to win a club trophy but is preferred to Liverpool's Roberto Firmino, a Champions League and Premier League winner, and Gabriel Barbosa, one of the best players in Brazil and the scorer of the winning goal for Flamengo in the Copa Libertadores final in October.

But Tite's belief in Richarlison must at least partly stem from his far superior goal record for his country. With a strike rate of 0.49 goals per game, the Spurs forward is a more reliable goalscorer for Brazil than any of his rivals.

What also gives Richarlison an edge is his character - and his love of playing for his country. Vickery believes "playing for Brazil is the most important thing for him," adding: "He can only be Richarlison - he cannot be anything else.

"He's a fearsomely strong character and he can only play that way."

That strength of character must be traced back to Richarlison's youth when, as a 10-year-old, he used to walk 18km without any shoes as his trainers had fallen apart, just to attend a football academy.

Richarlison has admitted his life could have been very different were it not for his talent and hard work, saying: "A lot of my friends are in jail or dead.

"They got caught up in the world of drugs and guns. I was in the middle of it all. Where I lived was a drug-dealing spot. I never got involved in any of it."

Richarlison's life is very different now. He was perhaps too young to remember Ronaldo leading Brazil to glory in 2002 but was eight when he bowed out of the World Cup for the final time in 2006, leaving a hole that the national side struggled to fill.

He may not be 'O Fenomeno' but, 16 years on, Richarlison could be the striker Brazil have been waiting a generation for.