Earlier, Spurs had taken the lead when Lucas Moura's attempted cut-back bounced into the Rennes net off defender Loic Bade (11), but the visitors soon faded and Flavien Tait equalised for Rennes (23) with a clinical low finish from the edge of the box.

Spurs ultimately did just about enough for a point and there was an eye-catching performance from the returning Tanguy Ndombele, who appeared to be on his way out of the club in the summer, but their efforts in France came at a cost.

Spurs, already without Heung-Min Son, lost Steven Bergwijn in the first half after the Dutchman, who had only just returned from injury, hurt the same ankle, while Moura was also forced off with an ankle problem after the break.

It remains to be seen whether either will be able to face Chelsea in Sunday's Premier League meeting at the Tottenham Hotspur Stadium, live on Sky Sports Premier League.

One man who might have forced his way into Nuno's plans is Ndombele, who was given his first appearance of the season after asking to leave in the summer.

It did not take Ndombele long to show Nuno what he was capable of as a sublime piece of skill created an 11th-minute opener for Spurs which capped an impressive opening.

Tanguy Ndombele made his first appearance for Tottenham under Nuno Espirito Santo in the Europa Conference League game with Rennes.

The Frenchman has not featured this season after asking to leave in the summer, but he was awarded his first outing in the Group G clash.

Harry Kane, Steven Bergwijn and Lucas Moura were other high-profile starters as Spurs began their group campaign with their toughest test.

The Frenchman produced an audacious off-balance back-heel to set a counter-attack going. Oliver Skipp passed to Harry Kane, whose incise first-time ball put Moura in the clear and the Brazilian's attempted cross was deflected into his own net by Bade.

That was as good as it got for Tottenham as Rennes began to take control of the game.

They should have had a leveller soon after as Benjamin Bourigeaud's shot was beaten away by Pierluigi Gollini into the path of Adrien Truffert, but the left-back could not keep his header at an open goal down and it went over the crossbar.

Spurs did not get away with it for much longer as Tait levelled in the 22nd minute.

The midfielder played a one-two with Serhou Guirassy, left Ndombele and then curled a low shot into the bottom corner from the edge of the area.

Nuno's side were on the rack and things got even worse when Bergwijn, back from an ankle injury, went off after appearing to suffer a recurrence of the problem.

Hojbjerg's arrival steadied the ship and Spurs got through to half-time without suffering further damage.

Their plans went further astray early in the second half as Moura limped off and was joined by Kane, who was also taken off in a seemingly planned substitution with the Chelsea game in mind.

With them went Tottenham's best chance of winning and they found themselves 2-1 down in the 72nd minute.

Rennes attacked down their left and Gollini spilled a low shot from Kamaldeen Sulemana, with Laborde enjoying the easiest of tap-ins.

With 17-year-old Dane Scarlett leading the line, Spurs could have wilted, but they found a leveller four minutes later.

Doherty's cross was deflected kindly into the path of Hojbjerg and the Dane poked home from close range as the points were shared in France. 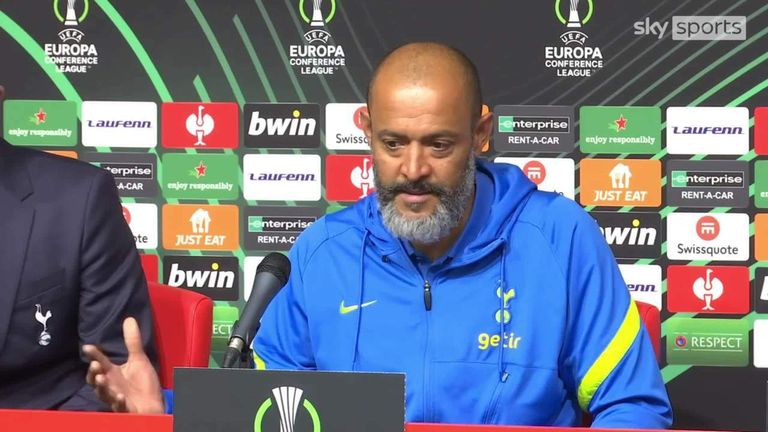 Tottenham head coach Nuno Espirito Santo has selection concerns ahead of their Super Sunday clash with Chelsea after Steven Bergwijn and Lucas Moura were both injured in their 2-2 draw with Rennes in the Europa Conference League.

With Spurs losing Bergwijn and Moura to injury and with Son already battling a calf issue, Nuno is looking short of options for Sunday's Premier League clash with Chelsea, live on Sky Sports. That is in addition to having Cristian Romero, Giovani Lo Celso and Davinson Sanchez out of action for the last two games as they quarantine in Croatia.

"It's been terrible. I must be honest. Let's not hide behind anything. After the Watford game, everything that has happened has not been very good for us.

"But this is football. And we know it's a moment we have to overcome.

"Today, we tried to show the players solutions, thinking about the game on Sunday. But it's about overcoming obstacles. That will make us stronger for the future, for sure."

Asked whether Bergwijn or Moura would be fit for Sunday's game, he said: "Painful, really bad. I cannot tell you. They are being taken care of by the medical department. But it's been tough."

Analysis: Kane not up to speed

"I think we should expect more from Spurs tonight, and that's no disrespect to Rennes who played really well on the night. This will be Spurs' toughest test in this group so you'd like to think they will pick up points in the rest of their games.

"I still expect that Tottenham team to go over there and put in a performance. Ndombele was always looking to make something happen with the forward pass. It's going to be a tough test for Spurs if they play like that on Sunday [against Chelsea]."

On Harry Kane's performance: "He's not quite up to speed yet. I think it was another good game for him to get minutes into the legs. He played around an hour. They took him off to look after him ahead of the weekend but he was quiet and had about one shot on goal. He kept on coming short to make things happen but it didn't quite work for him on the night."

Tottenham face Chelsea in the Premier League on Sunday, live on Sky Sports Premier League from 4pm with kick-off at 4.30pm. Their next Europa Conference League game comes at home to NS Mura on September 30.