Harry Kane came off the bench to score a 20-minute hat-trick as Tottenham eased the pressure on Nuno Espirito Santo with a 5-1 victory over NS Mura in the Europa Conference League.

After conceding three goals in three successive league defeats, Spurs could ill-afford another setback but required just eight minutes to put the game beyond the Slovenian champions.

Captain Dele Alli won and then converted a penalty in the fourth minute before Giovani Lo Celso rifled in a brilliant strike four minutes later to leave Spurs with a handsome half-time lead.

A stunning volley from Ziga Kous - the goal of the game - halved the deficit for NS Mura but Kane come off the bench just before the hour and converted three close-range efforts in half an hour to seal the victory which lifts Spurs top of Group G, after Rennes win at Vitesse Arnhem.

To what extent Thursday's morale-boosting victory heals the wounds from Sunday's north London derby remains to be seen but, at the very least, Spurs have laid a foundation from which to tackle the tougher challenges ahead.

There were barely three minutes on the clock when Spurs created their first opening. Dane Scarlett's flick released Alli through on goal where he was brought down by goalkeeper Matko Obradovic. Spurs captain for the night, Alli, dusted himself down and dispatched from 12 yards as the hosts hit the front inside four minutes.

One quickly became two, with Lo Celso driving into the area and unleashing a venomous drive across goal and into the top corner to double Spurs' lead after just eight minutes.

NS Mura should have halved the deficit on 12 minutes but Nardin Mulahusejnovic steered a gilt-edged header wide of the target when Amadej Marosa's cross found him unmarked.

Spurs were guilty of sitting back on their lead, with Alli's fierce drive, which forced a decent save from Obradovic in the Mura goal, their only notable effort before the interval.

Spurs' tentative approach came back to haunt them eight minutes into the second half when, against the run of play, Kous sent a stunning volley past the rooted Pierluigi Gollini after a cleared corner fell to him on the edge of the area.

It prompted Nuno to turn to his bench, bringing on Kane, Heung-Min Son and Lucas Moura in a statement of intent as a triple substitution before the hour, and it transformed Spurs' lethargic performance.

Kane went over in the area in search of a penalty within seconds of entering the fray and soon restored Spurs' two-goal lead as he latched onto Moura's through pass and finished unerring past Obradovic.

Kane added his second on 76 minutes, applying a clinical finishing touch to a rapid Spurs counter which had see Son streak down the left and hurdle a challenge before squaring for his strike partner.

Then, with two minutes remaining, Kane completed his hat-trick, dispatching on the turn after collecting Lo Celso's threaded pass as Spurs took a step in the right direction after a testing period.

1995 - Harry Kane is the first Tottenham player to score a hat-trick as a substitute since Ronny Rosenthal vs Southampton in the FA Cup in March 1995. Cameo.

Spurs boss Nuno Espirito Santo speaking to BT Sport: "Pretty good [performance]. We started very well, our dynamic was good. The beginning of the second half, they scored. After that we played good. A good game.

"It [the triple sub] was needed. The best way to prepare the players is to play. The minutes were important for the boys. A lot of positives." 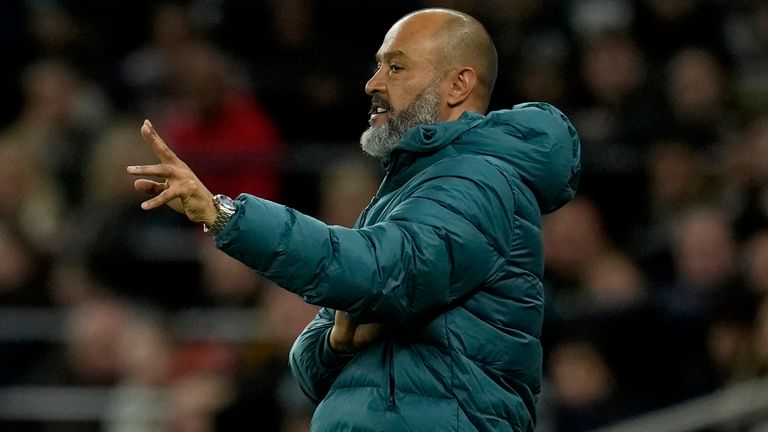 Tottenham host Aston Villa in the Premier League on Sunday at 2pm.