By Lewis Jones at Old Trafford 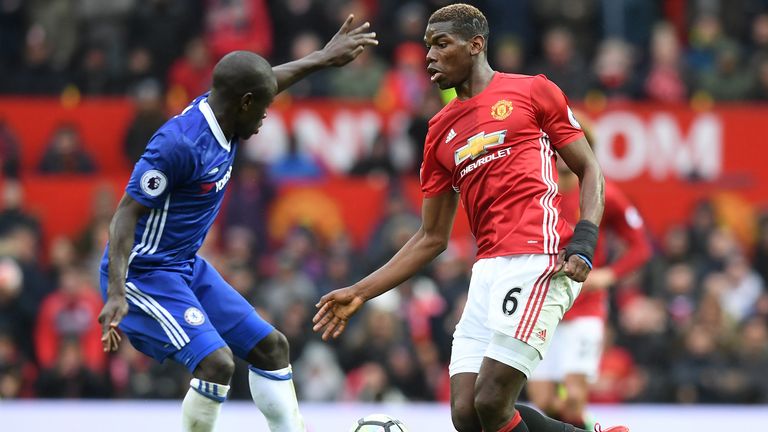 Marcus Rashford's early strike and a deflected Ander Herrera effort were the difference between the teams on Sunday, as the gap between Antonio Conte's men and Tottenham in second place remains at four points with six games to play.

However, Chelsea, who have been top since November 5, appear to have an easier run-in than Spurs as they only have to face one side in the top six, while the north Londoners have home matches against Arsenal and United.

For United boss Jose Mourinho, who decided to rest Zlatan Ibrahmovic, the result leaves his team just four points behind Manchester City in fourth with a game in hand and stretches their unbeaten run in the Premier League to 22 games - the longest current unbeaten run in Europe's top five leagues.

The decision to rest Ibrahimovic was one of four changes from United's draw at Anderlecht on Thursday night as Jesse Lingard and Rashford lead the line. Thibaut Courtois picked up an ankle injury in training for Chelsea while Marcus Alonso felt unwell in the warm-up as Conte had to shuffle his pack.

United's reliance on 28-goal Ibrahimovic this season has been a bugbear for Mourinho, who has openly criticised his attackers for not taking their chances. He would have been forgiven for thinking it would be another one of those days when Rashford shanked a presentable chance after running behind David Luiz on four minutes.

However, Mourinho did not have to wait long for the opener as Chelsea failed to heed Rashford's speedy warning.

Nemanja Matic's pass in midfield was blocked by Herrera's hand but referee Bobby Madley saw no infringement and the Spaniard, who started at right-back to deal with Eden Hazard, sprung into action. He lifted his head and picked out an exquisite pass in behind Luiz, which was straight into Rashford's path.

The striker stayed cool under pressure and lifted the ball over Begovic into the far corner to score his first goal in 20 Premier League appearances.

It was the first time United have scored at Old Trafford before the 21st minute this season and Chelsea looked stunned. Meanwhile, United were at full throttle with Rashford leading the line with great maturity.

He was inches away from tapping home skipper Ashley Young's low cross on 16 minutes before whipping over a tasty cross of his own four minutes later which Begovic clawed to safety.

Chelsea's frustrations were summed up by Diego Costa, who was in a typically grizzly mood and picked up a booking on 32 minutes for a late tackle on Paul Pogba. Undeterred by the caution, Costa then clashed with Marcos Rojo inside the United area, as both players' theatrics were ignored by Madley.

A reaction was expected from the lacklustre visitors after the break, but, instead, it was United that grabbed the crucial second goal of the game on 49 minutes.

Some determined work down the left flank by Young caused the Chelsea back-line to drop deep. The ball popped out to Herrera on the edge of the box and his effort took a big deflection off Kurt Zouma before flying past Begovic.

The ruthless attacking play that has seen Chelsea score 65 goals this season was non-existent as United soaked up plenty of possession without really being troubled. Pedro fired a speculative attempt over the crossbar on 65 minutes - and that was as good as it got for the nervous west Londoners.

Before Sunday's blank, Chelsea last failed to score in the Premier League in a 2-0 defeat at Tottenham - and it is Spurs that are on their tail with the finishing line in sight.

Man of the match: Ander Herrera