Report and highlights as Liverpool ease past Norwich to get their season up and running; Diogo Jota opened the scoring (26); second-half goals from sub Roberto Firmino and Mohamed Salah rounded off a perfect start; Salah has now scored on a fifth successive PL opening weekend 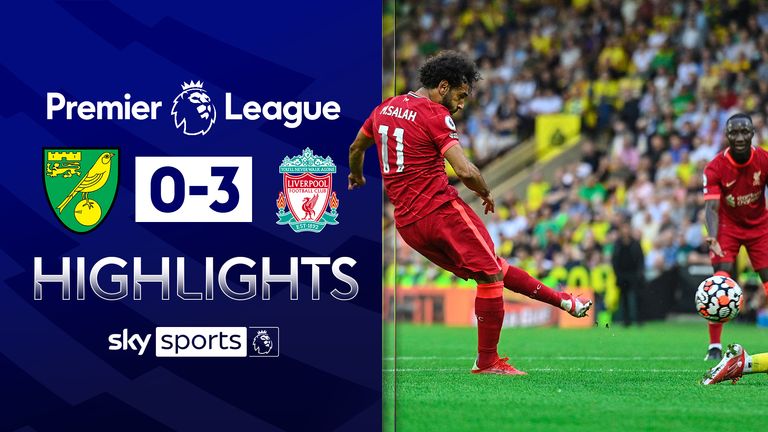 FREE TO WATCH: Highlights from Liverpool's win at Norwich in the Premier League

Liverpool made a fast start to their Premier League campaign, racing out of the blocks with a comfortable 3-0 victory at Norwich.

It had been a good weekend for the newly-promoted sides with wins for Brentford and Watford, but Norwich could not make it a clean sweep as Jurgen Klopp's side, who handed the returning Virgil van Dijk his first competitive start in 10 months, clicked into gear.

Diogo Jota sent the Reds on their way in the 26th minute before second-half goals from substitute Roberto Firmino (65) and Mohamed Salah (74), who has now scored on five successive opening weekends to a Premier League season, sealed a comprehensive win.

For Norwich, who have now lost 11 consecutive Premier League matches, it was a difficult start to their return to the top flight and, despite some positive moments during the game, things will not be getting any easier for Daniel Farke and his side as they head to defending champions Manchester City next weekend.

How Liverpool made the perfect start to the season...

Norwich, backed by their loud home support, started brightly, knocking the ball around with confidence, but it was Liverpool who created the first opening.

Jota, who was inches away from getting on the end of Konstantinos Tsimikas' cross moments earlier, forced Tim Krul into action, the Norwich goalkeeper tipping the Portugal international's header over the crossbar.

Salah then tested Krul again and the Dutchman stood firm, palming a powerful shot away from goal at his near post.

Liverpool were starting to dominate the game but they were given a warning when Teemu Pukki ran in behind Van Dijk to latch onto Todd Cantwell's pass, but the striker's shot was beaten away by Alisson.

At the other end, Salah volleyed wide before Liverpool took the lead. Trent Alexander-Arnold crossed into the area for Salah and while his touch appeared to be aimed to set up a chance for himself, it rolled between the two Norwich centre-backs and Jota drilled past Krul for the opener.

The goal quietened down the home fans and Norwich were hanging on a bit as the first half drew to a close. Pierre Lees-Melou was forced to block shots from Salah and Joel Matip as Norwich got into the break trailing by just the one goal.

Liverpool continued to dominate after the break, and they went close to extending their advantage when Sadio Mane's strike was blocked by Max Aarons and Alexander-Arnold's free-kick drifted just wide.

There was no let up for the hosts as Krul had to be alert to keep out Tsimikas' powerful low drive as the second goal looked to be coming.

It eventually did arrive when Firmino, who replaced Jota, provided the simplest of finishes after being set up by the unselfish Salah.

Salah did eventually get his goal, steering the ball past Krul from the edge of the area to create Premier League history for his opening-day record.

To cap off a near-perfect opening game for Liverpool, Alisson made three quick saves in succession - the best of which denied Ben Gibson from close range - to keep Klopp's side's clean sheet intact.

Jamie Redknapp: "Virgil van Dijk is such a Rolls Royce. He's a majestic footballer. Players like him don't come along very often and he's probably sat and watched Ruben Dias at Man City last year and everyone waxing lyrical about him. I'm sure there's a little bit in Van Dijk wanting that mantle as the best defender in the Premier League, and for me, he's one of the best I've ever seen.

"You could see the assurance he gives everyone around him. Liverpool cannot win the title without him, but the fact they've got him back gives them a much better chance. He's a phenomenal player that just gives everyone that calmness and confidence around him."

Karen Carney: "It's still his first 90 minutes. He can have all the touches he likes but the biggest stat for him is a clean sheet. The pleasing thing for him will be the 90 minutes under his belt and the clean sheet.

"He brings a calmness to the whole team. He has that aura and that presence and he's only going to go from strength to strength. I think he's only at 80 per cent at the moment but you only get that last 20 per cent as you play more and more minutes."

After that long time being out and the pre-season he had, being back on the pitch feels different, you could see all his class. It was hard for him to go for 90 minutes. we'll see if he has enough time to recover.

Norwich boss Daniel Farke: "It is great to have them [the fans] back. Football without them is not the same.

"In general, I have many compliments for our lads. We struggled with many odds against us. We had to train with 11 key players and had to cancel two friendlies. We had to train for two weeks with 10 first team players. The energy was there. For 65 mins we were competitive. In the end it was a deserved win for Liverpool. I was pleased we showed maturity not to concede more than three. Our reaction and maturity in this moment... there were many positives to take.

"I am more confident after this game than before [about Norwich's survival chances]. We had attacking threat and good movement in the final third. It was difficult in the moments we conceded. We can take many positives from parts of the performance."

Liverpool manager Jurgen Klopp: "We had two games against Athletic Bilbao and Osasuna, and they were really good games. It was a good sign that we're ready to go, but when you start the league it's different.

"We had to find our way in the game and scored three really nice goals because we forced them. It's a good start. The boys are fit but you have to get used to the feeling again, that it's really exhausting but you can [still] go. You have to get over that point in the game, and we did, and hopefully next week we'll be fresher for longer.

"It's great to see the fans back and I hope that Norwich celebrated as well because they had an exceptional season. Their pre-season has not been easy [due to Covid-19 protocols], and facing us is not too easy, but we were really professional.

"We were not here to show the most exciting football, just to get the basis for the new season, and we did. Football is back."

There could only be one winner...

Sky Sports' Alan Smith: "There were a few players to choose from but when you've got two assists and a goal, it's difficult not to give it to Salah. Trent Alexander-Arnold and Sadio Mane were competitors and they looked so polished and classy as well, but Salah's performance deservedly gets the award."

Sky Sports' Jamie Redknapp: "He's a brilliant player. There's always talk about him not doing enough for the team in terms of setting up goals and getting assists, but his goal record since he's gone to Liverpool has been nothing short of phenomenal. Every game he works so hard for the team and I thought Norwich's left-back did well against him, but he still has an impact. Even when he's quiet in a game he'll get a goal or an assist. He's a world class player and Liverpool are so lucky to have him."