Match report and free highlights as Bournemouth score three second-half goals to beat Nottingham Forest and give Gary O'Neil his first win; Philip Billing, Dominic Solanke and Jaidon Anthony turned the game around after Forest had led through Cheikhou Kouyate and Brennan Johnson 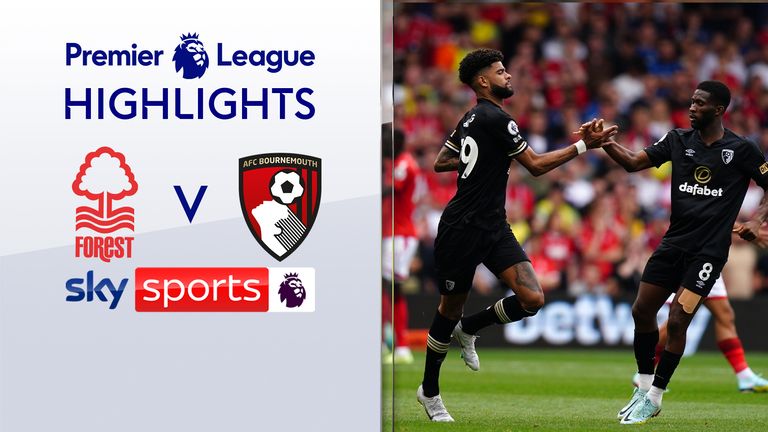 FREE TO WATCH: Highlights of Bournemouth's win over Nottingham Forest in the Premier League

Bournemouth overturned a two-goal deficit to beat Nottingham Forest 3-2 at the City Ground and give Gary O'Neil his first win as interim manager.

Trailing at half-time through Cheikhou Kouyate's header (33) and Brennan Johnson's penalty (45+2), Bournemouth pulled level after the break thanks to a Philip Billing thunderbolt (51) and Dominic Solanke's smart close-range finish (63).

The Cherries were not done there, though, as substitute Jaidon Anthony tapped in Solanke's cross three minutes from time (87) after a mistake from Scott McKenna to send the visitors back to the south coast with an impressive victory.

The result means Forest have lost three consecutive league games and drop into the relegation zone (18th). Bournemouth rise to 13th with O'Neil picking up four points from a possible six following the departure of Scott Parker.

Man of the match: Dominic Solanke.

"I am speaking to you before I have spoken to anyone. As far as I know that is still the situation. I honestly haven't considered whether I want it permanently.

"I feel like my job at the minute is to get Bournemouth as many points as I can in this period that I am here. I am fully focused on that.

"The minute we came off the pitch, I just thought that we need to get ready for Brighton. Whether that is me or someone else, we just need to get some rest into them and go again."

Looking for a response to Wednesday's 6-0 defeat at Premier League champions Manchester City, Forest opened the scoring after an uneventful opening half an hour when Kouyate met a Morgan Gibbs-White corner to steer a powerful header past Bournemouth goalkeeper Neto.

Drama then unfolded in first-half stoppage time when referee Michael Oliver pointed to the penalty spot after Lloyd Kelly blocked a Neco Williams shot with an outstretched arm. Following a lengthy VAR review, the referee was then advised to check the pitchside monitor before eventually sticking with his original decision.

Steve Cook and Jesse Lingard replaced Remo Freuler and Lewis O'Brien, who both dropped to the bench.

Bournemouth named an unchanged side after drawing 0-0 with Wolves in midweek.

Jack Stephens was among the substitutes following his season-long loan move from Southampton.

Despite having to wait for five minutes, Johnson held his nerve brilliantly to beat Neto and give Forest a comfortable advantage, before Bournemouth staged a remarkable comeback.

Six minutes after the break, Lewis Cook nipped in ahead of Jesse Lingard in midfield and fed Billing, whose left-footed thunderbolt whistled past Dean Henderson to half the deficit.

Twelve minutes later, Marcus Tavernier's floated corner to the back post was met by the head of Kelly and Solanke did the rest, acrobatically guiding the ball past Henderson from a few yards out for his 50th goal in a Bournemouth shirt.

The turnaround was complete in the 87th minute when McKenna's poor backpass on the touchline was intercepted by Solanke, giving the forward a chance to cross to Anthony, who had been introduced just moments earlier, for a simple finish.

Forest striker Taiwo Awoniyi, one of 21 players signed by the club in the summer transfer window, almost rescued a draw moments before the final whistle, but he shot wide from inside the box.

Having been humiliated 9-0 at Liverpool last week, Bournemouth boss O'Neil's temporary reign has started with a hard-fought goalless draw at home to Wolves and now an outstanding victory on their travels.

Bournemouth interim head coach Gary O'Neil: "Just delighted for the boys really. We asked them at half-time to believe and go again. To respond at that point after the week they have had says everything about what this group is about.

"They are an incredible group - so committed, so relentless. They never know when they are done. Two games on the trot they have literally emptied the tank for me.

"Everyone at the club deserves it, everyone who has supported me over the last few days.

"They are delighted, they need a rest, as do I, they have been on a rollercoaster of a journey since this time last Saturday."

Cooper: Forest threw it away

Nottingham Forest head coach Steve Cooper: "I didn't see the second half coming. I thought we were very good in the first half, and good for the two-goal lead.

"The first goal, we didn't defend well enough before the ball went in the net. That has then set the tone for the second half, and we've not managed that very well.

"The second goal was from a set-piece. We should do better.

"Then there was a mistake from Scott for the third goal. That's the first time he's put a foot wrong since I've been here.

"But let's not hide away from the fact that we've thrown away a win. We've not done it in a very good way. We've conceded three goals at home, and there's nothing good about that."

What started as a tumultuous week for Bournemouth has ended as a positive one. A 9-0 hammering at Liverpool last Saturday was followed by Scott Parker becoming the first Premier League manager of the season to lose his job.

Gary O'Neil took interim charge and it would have been no surprise to see the Cherries devoid of confidence and ideas as they tried to regroup for tricky fixtures against Wolves and Nottingham Forest.

But as O'Neil puts his feet up this weekend and reflects on his first two games, he can be proud of the fight and spirit - and at times quality - his side have shown. Four points out of six and the manner of their outstanding comeback at the City Ground on Saturday proves they can throw their weight around at this level.

"They are an incredible group - so relentless, so committed," O'Neil said afterwards. If they are "ill-equipped" to compete in the top flight this term, they certainly haven't shown it so far under the 39-year-old. He's making a case to be Parker's permanent replacement.

Steve Cooper described Nottingham Forest's 6-0 loss at Premier League champions Manchester City on Wednesday as "a massive learning curve." The scoreline was a demoralising one, but not many expected his side to get a result at the Etihad.

Saturday's game at home to struggling Bournemouth, however, was a "must-win" according to Sky Sports pundit Michael Dawson. They failed the assignment.

Losing in the manner they did - having led 2-0 at half-time - will worry Cooper. After six matches, his side have now lost three in a row and find themselves in the relegation zone.

A "unique transfer window", he said after the club brought in 21 players - a British record - to aid their bid for survival. With Leeds and Fulham up next, he will be desperately hoping Forest's second-half capitulation against Bournemouth was a rare blip.

What's next? Forest travel to Leeds live on Sky

Nottingham Forest's next game sees them travel to Leeds on September 12 for Monday Night Football, with kick-off at 8pm - live on Sky Sports.

Forest will then host Fulham on Friday September 16, with kick-off also at 8pm.

Bournemouth are next in action on Saturday September 10 when they host Brighton, with kick-off at 3pm.

The Cherries will then face a reunion with former manager Eddie Howe when they travel to Newcastle on Saturday September 17, with kick-off again at 3pm.