Scott Twine scores four times as MK Dons romp to victory at Home Park, but result not enough to secure second spot ahead of Rotherham; Plymouth finish seventh and miss out on the play-offs as Wycombe grab final spot 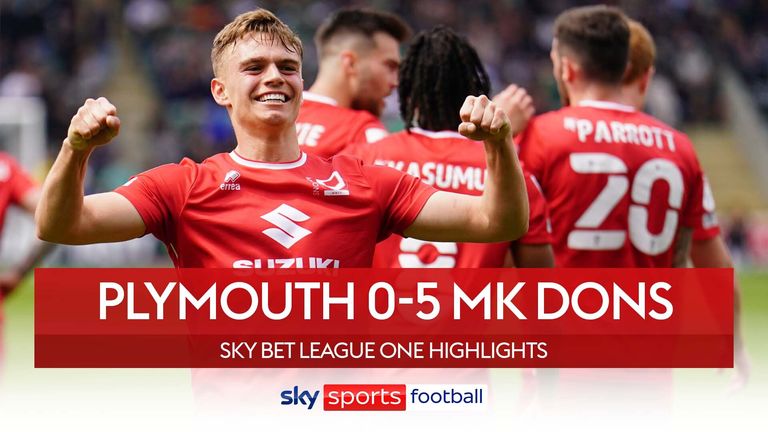 Highlights of the Sky Bet League One match between Plymouth Argyle and MK Dons.

MK Dons missed out on automatic promotion from League One despite a thumping final-day win over Plymouth, who finished outside the play-off places.

Scott Twine scored four times and Harry Darling headed in the other goal at Home Park.

The Dons finish third, one point behind second-placed Rotherham, and will face Wycombe in the play-off semi-finals.

Plymouth, who had Jordan Houghton sent off late in the first half, finish seventh, three points behind Wycombe.

Twine opened the scoring in the 17th minute with a superbly-flighted direct free-kick from just outside the penalty area, not long after his 25-yard free-kick came back off the face of the bar.

Twine increased the Dons' lead in the 41st minute with a thumping strike past Argyle keeper Michael Cooper after cutting in from the left of the area.

The striker completed his hat-trick on the hour from close range following a superb move down the right and David Kasumu's pinpoint cross.

Twine smashed home his fourth, a 25-yarder off the post in the 78th minute.

Sandwiched in between Twine's quartet, Harry Darling made it 3-0 in the 43rd minute, a free header from Josh McEachran's corner.

Argyle's Jordan Houghton was sent off in first-half stoppage time after being booked twice in five minutes.

Argyle target man Luke Jephcott will rue missed opportunities in the 13th and 14th minutes when he fired just wide from successive crosses into the six-yard box.