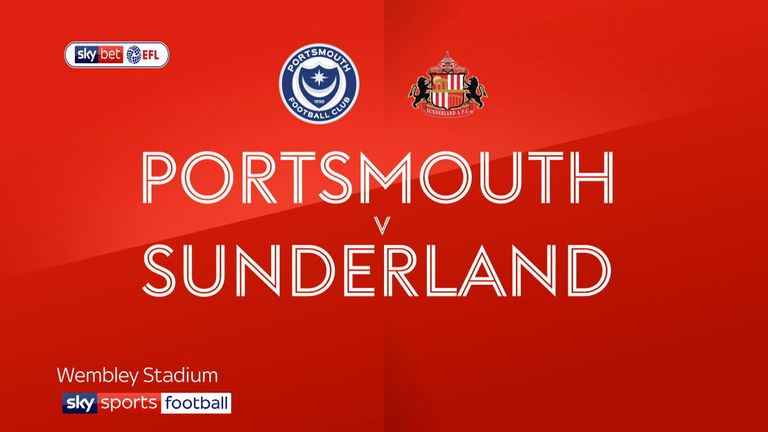 Oliver Hawkins scored the decisive spot-kick as Portsmouth beat Sunderland 5-4 on penalties to win the 2019 Checkatrade Trophy final at Wembley.

Aiden McGeady had given the Black Cats the lead (38) from a free-kick as they ran Kenny Jackett's side ragged in a dominant first half, but Nathan Thompson headed home Gareth Evans' cross to send the tie to extra-time (82).

Jamal Lowe then latched onto a long ball out of defence, before lifting the ball over Jon McLaughlin (114), but McGeady ensured the final would be settled via a shootout with a minute of extra-time remaining (119).

Man of the match: Matt Clarke

Lee Cattermole missed Sunderland's second penalty, and with no other player missing the target, Hawkins finally sealed the triumph for Pompey at the end of a thrilling encounter.

Though not the spectacle these sides were used to in their top-flight days, this Wembley showpiece presented a chance for both to cap their emergence from the tumultuous days they had suffered over the past decade.

As perhaps may have been expected, Sunderland flew out of the traps at the national stadium, with skipper George Honeyman testing the water early on with a teasing low cross that caused Thompson to cautiously sweep behind. 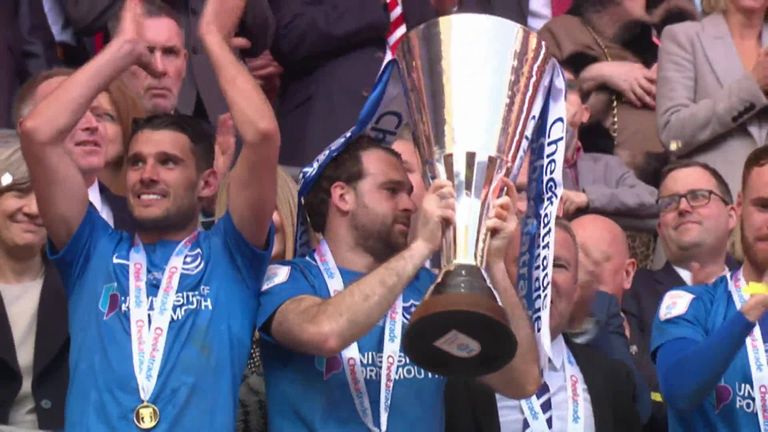 Faced with a tenacious frontline, Pompey struggled to get out of their own half as the game progressed and found it difficult to contain energetic midfielder Lewis Morgan, who forced Craig MacGillivray into a great save with a dipping shot from the edge of the area.

But seven minutes before the break, McGeady fired Jack Ross' men to a richly-deserved lead, curling a deflected free-kick into the top left corner to spark deafening roars from the red-and-white end of the stadium.

The half-time team-talk clearly lifted Portsmouth, who went close through Lowe, before Brett Pitman cannoned a shot off the base of the post.

The breakthrough finally came after 82 minutes, when Thompson headed home Evans' lofted cross and Portsmouth finally took the lead in the first half of extra time when Lowe got the better of Jack Baldwin to beat the stranded Jon McLaughlin.

The most significant pre-match news at Wembley was that Ronan Curtis started for Kenny Jackett's side, despite partly-severing his finger just a few short weeks ago. Gareth Evans made way for the Irishman.

There were two changes for the Black Cats, as George Honeyman and Reece James came into the side in place of Adam Matthews and Max Power. 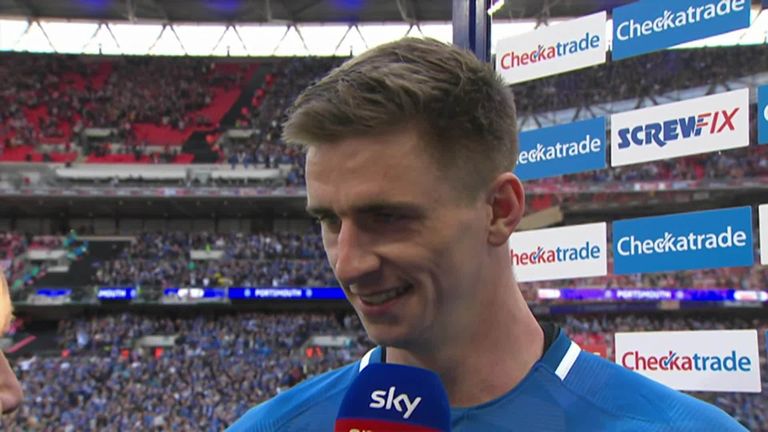 The drama continued into the final minute of the added period when McGeady added his second by bundling the cross over the line. His side did not have enough in the end, though.

Though the Irishman netted his own spot-kick from 12 yards, Cattermole's penalty was superbly saved by MacGillivray and, in the end, that was all that separated the two.

Man of the match - Matt Clarke

The awareness and stability shown by both Matt Clarke and Christian Burgess was an important component for Kenny Jackett's side.

Just 22-years-old, the centre-back put in a mature performance that was rewarded with a deserved cup winner's medal after the penalty shootout.

"Those tactical changes helped, but having said that, we showed a lot of character as well. From 45 minutes on, I thought we dominated and deserved to win. Sunderland were, quite rightly, ahead in the first half but it was a terrific comeback and we persevered and got there in the end.

Jack Ross: "I think, first of all, we are sore. As you can imagine, when you lose any final, it hurts and especially when you lose it in the manner that it goes to a penalty shootout. 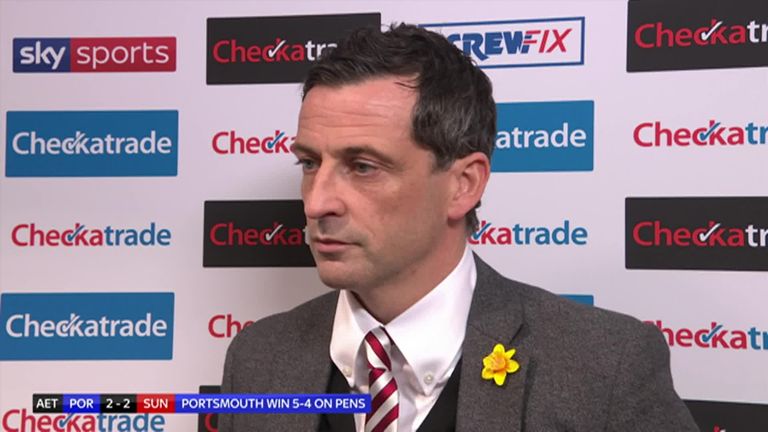 "When it goes to extra-time, it becomes a lot about commitment, desire and hunger and I think both teams had that as well. I'm proud of what my players have given me today but, ultimately, we're sore that we haven't come out on the winning side.

"Irrespective of the result, it was always going to be huge for us. We'll allow the players to relax tonight and then we'll get back to work tomorrow and prepare for Accrington."

It's straight back to league business for Sunderland, who travel to Accrington on Wednesday night, while Portsmouth have slightly longer to savour their cup final victory - they are away to Wycombe on Saturday afternoon.