Report as James McClean's early goal for Republic of Ireland gets cancelled out by Mohammed Muntari's second-half strike in an international friendly at Nagyerdei Stadion in Debrecen, Hungary 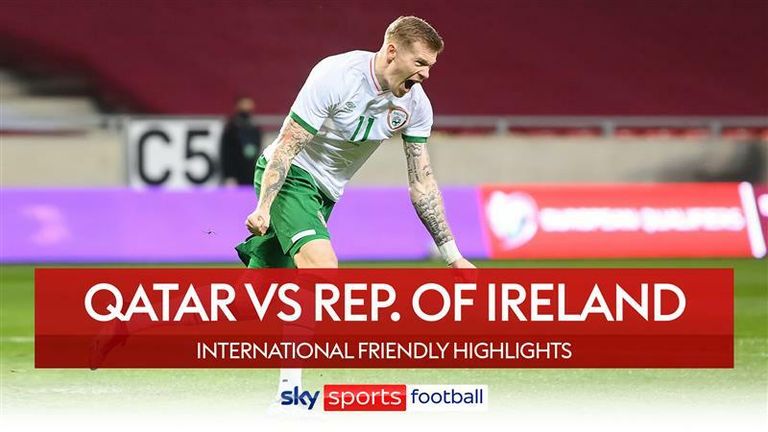 Highlights of the friendly between Qatar and Republic of Ireland

An international window to forget for the Republic of Ireland ended with a 1-1 draw against Qatar in Hungary.

As Stephen Kenny's side looked to bounce back from defeats to Serbia and Luxembourg which have left their World Cup qualification ambitions in tatters, they aimed to finish the week on a high note in a friendly against the hosts of the 2022 tournament played at the Nagyerdei Stadium, home of Debrecen.

The Republic got off to a perfect start, as James McClean found the net in the fourth minute after a rehearsed set-play from a corner-kick.

However, they were pegged back just after half-time as Mohammed Muntari equalised for Qatar.

Neither side could find a breakthrough throughout the remainder of the contest, with Josh Cullen missing a 93rd-minute headed opportunity to win the match.

Man of the match: Dara O'Shea

Ireland fail to kick on after promising start

Seldom had a performance and result in a seemingly meaningless friendly appeared so important for the Republic of Ireland.

The aim of the game was to put the disappointment of Saturday night's loss to Luxembourg firmly in the rear-view mirror, and inject some positivity heading into a five-month wait until their next competitive outing.

While the performance looked promising at times, a victory eluded the Boys in Green as Kenny's winless start as manager now stretches to 11 games.

They enjoyed the perfect start, as McClean found the net within four minutes.

Ireland asked questions early on, with Jeff Hendrick looking lively in the middle of the park.

Robbie Brady almost scored a spectacular goal after Daryl Horgan laid him up for a volley on the edge of the box. However, his fierce effort was deflected out for a corner.

Horgan played a sweet 'one-two' with Shane Long on the set-piece before picking out McClean. The Stoke City star made no mistake.

The 2022 World Cup hosts looked to hit back immediately. Their players were incensed when Gavin Bazunu was judged to have brought down Pedro Miguel outside the area, resulting in a free-kick rather than a penalty.

Miguel was involved again moments later, finding the head of Almoez Ali with a vicious cross. However the forward was unable to steer his shot on target.

Long had a golden opportunity to double the lead, intercepting a back-pass - but the striker rushed his shot and it was an easy save for goalkeeper Saad Al Sheeb.

Hassan Al Haydos and Cyrus Christie both had shots from outside the box which sailed wide.

That was as close as either side came to the contest's second goal, as Ireland took a deserved one-goal lead into half-time.

Qatar were looking to hit back after the break, and they did just that.

Ali made a storming run towards the Irish penalty area in the 47th minute, before laying it off to Muntari who flicked it onto his right foot and found the bottom left corner.

Christie had an opportunity to hit back moments later, but his tame left-footed effort went straight at the goalkeeper.

Some of Ireland's play then became sloppy, with Al Haydos and Muntari both gifted chances to put Qatar into the lead. However, neither was able to capitalise.

As the half wore on, no clear breakthrough presented itself to either side, with Muntari, Abdelaziz Hatim and Callum Robinson all missing half-chances.

Eventually, the golden opportunity arose in the 93rd minute, as Cullen had a free header in the Qatar box. However, the Anderlecht midfielder failed to find the net.

Stephen Kenny has come under pressure after the Serbia and Luxembourg defeats, but feels his team will get it right in the future under his stewardship.

"We probably had much better chances on the night, and I'm disappointed to draw the game," the Republic of Ireland manager told RTÉ after the match.

I've great belief in the players in this squad, and I think we're going to formulate a very, very good squad over the next couple of years.

"We got beaten against Luxembourg and that was the important one. Even if we had won tonight, we would have been disappointed with that.

"It's only six months since my first match. We're implementing a completely new style, a brilliant culture in this team going forward.

"We just let ourselves down by not beating Luxembourg. We know that. We're kicking ourselves.

"You've everyone coming out of the woodwork now wanting to kick us while we're down. And that's alright, that's the gig we're in and that's part of it. You have to accept that. But I've great belief in the players in this squad, and I think we're going to formulate a very, very good squad over the next couple of years. And I'm going to manage that, and make sure we're even better."

Man of the match: Dara O'Shea

It was an impressive outing for the rapidly-improving defender. He looked assured once again at the heart of the Irish rear-guard, displaying his prowess in both defence and attack.

O'Shea was more than willing to push forward when opportunities presented themselves.

As Stephen Kenny looks to build for the remainder of the World Cup qualifiers, the West Brom star will be central to his plans.

The 22-year-old looks nailed on for a starting berth going forward, even if Kenny has a full deck from which to choose after the return of John Egan.

After the Republic of Ireland Ireland failed to qualify for Euro 2020, their next competitive outing is not until the first week of September when they travel to Portugal before hosting Azerbaijan and Serbia in World Cup qualifying Group A.